As the National Football Museum celebrates 10 years in Manchester, we are telling the stories of people who have been instrumental in the museum’s success.

The first of our ‘My NFM Story’ features is Allan Maull, the National Football Museum’s first and longest-serving volunteer who looks back at his time with the museum. 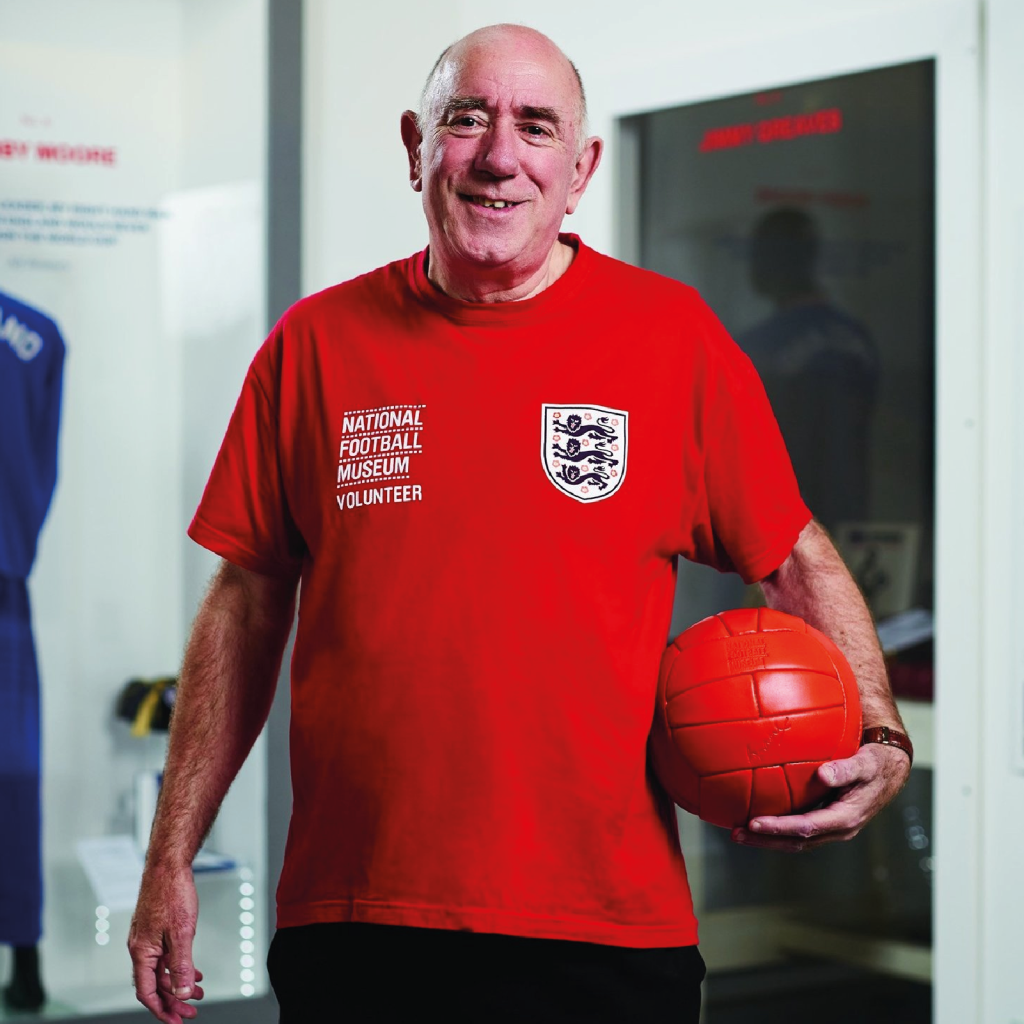 Beginning in 2015, Allan often helped with the tours for members of the public and answered any football-related questions they may have. He said he especially enjoyed the handling table, where objects such as old footballs or boots are brought out for people to touch and examine.

“It is always very interesting, especially for the youngsters, to see the old equipment versus the new equipment. I promote it, and I come in on the train, and I’ll talk to people, and I say I work at the front desk at the Football Museum, and so many people have come to the museum and got to the desk and said Allan told us to come and it’s really, really nice.”

At the start of its life, the National Football Museum was not the iconic building in the centre of Manchester that we know today. It began at Preston North End’s Deepdale ground in 2001. However, due to funding issues, the museum shut its doors to the public in 2010. It reopened in July 2012, and the museum as we know it today was born and had been preserving and displaying the beautiful game’s history ever since.

Allan reminisced about his first impressions of the museum; he talked about how he had visited the museum shortly after he retired and was blown away!

When asked about his favourite exhibition that he had seen at the museum, he said: “That is so easy to answer; the year after I started here, it was the 50th anniversary of the 1966 World Cup, England winning the World Cup. We had a ’66 exhibition on the third floor, and it was absolutely awesome. I told them a story that happened at my house during the 1966 World Cup on the TV, and they asked me to bring in some memorabilia from that day, and I did, and it was actually on display.”

Allan talked about where he would like to see the museum in another ten years, and he said: “Location-wise, where we are!” He also said: “Women’s football now is absolutely massive, the exhibition on the Score Gallery at the moment has been fascinating, we need something more permanent with womens’ stuff; I think the Lily Parr story is so important.”

He reflected on the importance of the museum for the city, saying: “But it is not just for the people of Manchester, it’s a national football museum, and they come from all over Europe to see how the game started and see the history of the game, I think that the amount people it brings into the city to come to this football museum is unbelievable.”