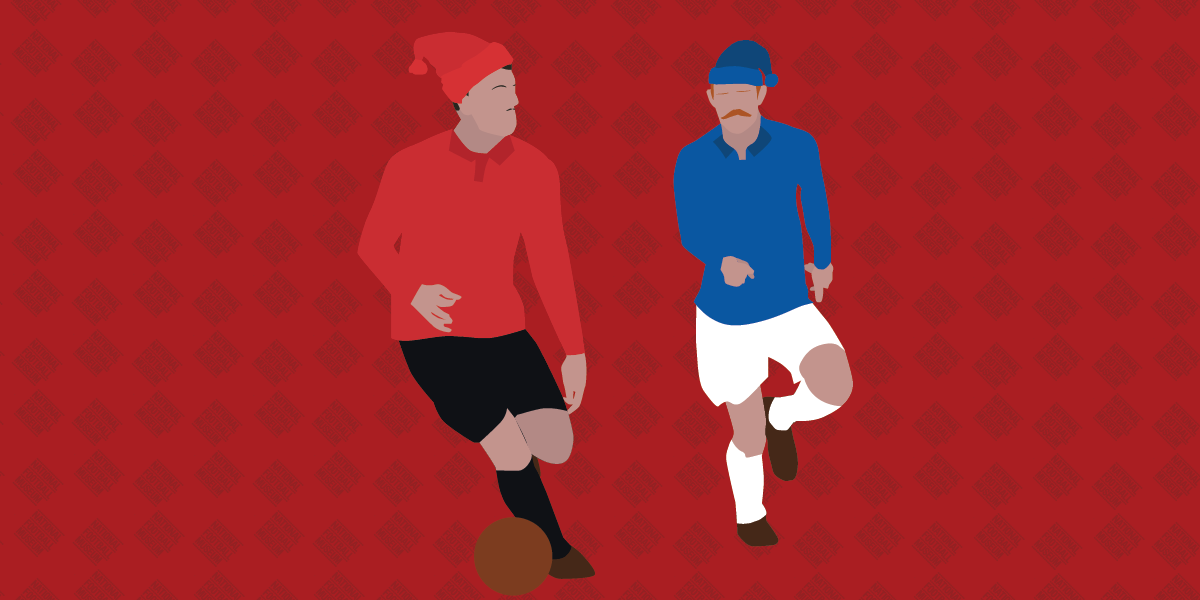 A full festive football programme is as much a part of British Christmas culture as turkey, mistletoe and door-to-door carolling – but where did it all begin?

There is recorded evidence of a form of football being played on Christmas Day itself, as far back as 1841. According to Bell’s Life in London, the ‘Body-guard Club’ arranged to play the ‘Fear-nought Club’ at the Grapes Inn in Rochdale for a cash prize and a half-barrel of gin, with the latter club instructed “to fix the time as early as possible”.

The twelve-a-side game, marshalled by a representative “umpire” from each side, kicked off to the sound of a pistol. The encounters – best-of-three, then a single game thereafter – were brought to a premature end when a tired Body-guards player ushered a man from the crowd to kick on his behalf. Though the game was played by a rather loose set of rules, the Body-guards’ own umpire deemed this to be foul play, and determined that the cash – and, more importantly, the Old Tom gin – should be awarded to the Fear-noughts.

Though two referees were present and some terms clearly established beforehand, this casual fixture between two Lancashire sides around the back of a pub does not constitute an official match, owing to the lack of codified rules. Instead, the first official recorded fixture dates to Boxing Day, just over nineteen years later.

Sheffield Football Club, the oldest continuous football club in the world, was established by two members of a local cricket club, Nathaniel Creswick and William Prest, in October 1857. Together, they not only brought the club into existence, but also drafted their own standardised set of rules, thereafter known as the ‘Sheffield Rules’. Many of these rules would form the cornerstone of the FA’s own codified Laws of the Game in 1863, alongside Cambridge University A.F.C.’s own rule set. 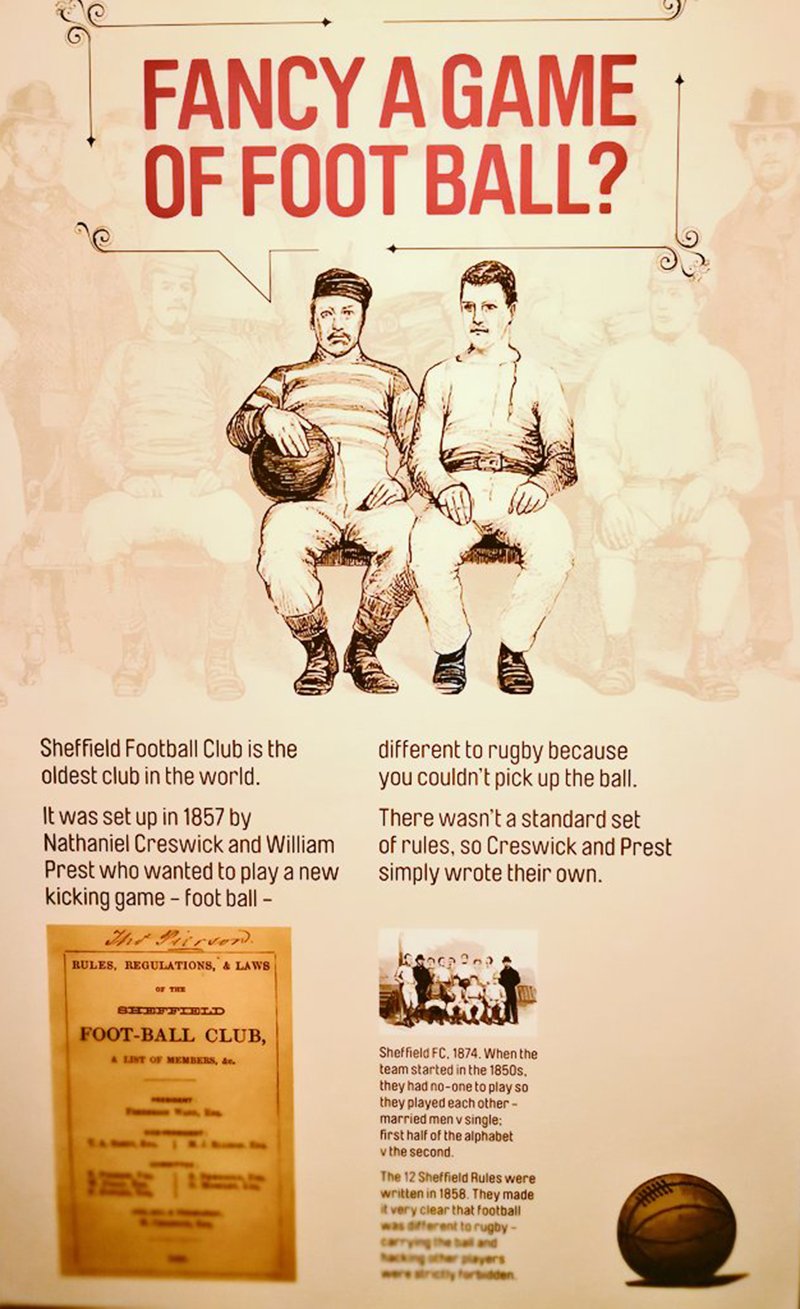 Being one of the first clubs in existence naturally made it difficult to play against external opposition. In Sheffield FC’s formative years, inter-club matches were orchestrated, pitting single men against their married counterparts; first half of the alphabet against the second; or professional players against workers.

The club’s first external fixture came in the Christmas month of 1858, against the 84th Regiment at Barrack Square, Hillsborough – not on a football field, but on rather more painful gravel. The civilians had the upper hand for much of the contest, dominating further after cracking the ribs of two of the “Queen’s defenders”. The final score amounted to a drubbing in Sheffield’s favour; though there was some disagreement about the final scoreline, Sheffield’s victory was not in doubt.

Before long, just four miles across the city, another club would come into being. Hallam FC were formed in September 1860; like Sheffield, they too came from cricketing foundations. The club was founded by captain John Charles Shaw and Thomas Edward Vickers, who were attempting to cultivate a slightly more inclusive club in the suburb of Crosspool. Interestingly, Vickers turned out for Sheffield in the aforementioned 1858 game, alongside his brother Albert.

Within two months, the steel city’s two clubs had arranged to play one another on Boxing Day. Prior to this, Sheffield played a warm-up game of sorts, this time taking on the 58th Regiment in a somewhat closer affair; this time, many of the soldiers had footballing experience, owing to their public school experiences. Nonetheless, Sheffield won by one goal and ten rouges to one goal and five (rouges initially being an Eton Field Game peculiarity, similar to a try in rugby).

At 1pm, in horrendously snowy conditions, Sheffield (purportedly with fewer numbers) and Hallam met at the latter’s cricket ground. Buoyed by those spectators who had braved the elements, both sides performed admirably, though the Sheffield Daily Telegraph said they “must give the palm” to the superior Sheffield players, who emerged victorious on the day.

The fixture was the first to be played between two clubs using the Sheffield Rules. The rules introduced the concept of free kicks, corners and throw-ins, and diminished the ability to handle the ball, as was prominent in earlier forms of the game. By the time of the Hallam game, only fair catches – claimed when the ball had not touched the ground – were allowed, with all other forms of hitting and pushing outlawed. However, while hacking was forbidden, these rules did allow for pushing and charging, in and out of possession.

While this first encounter was, according to the Sheffield Daily Telegraph, “conducted in good temper and in a friendly spirit”, festive cheer had dwindled within two years. Reporting on a December 1962 clash between the two teams, the Sheffield Independent suggested a more bruising affair; it accused Hallam’s William Waterfall of attacking Creswick, who “preserved his temper admirably” and did not fight back.

This account was challenged by a letter from the Hallam players the following week, who accused Major Creswick of poor sporting conduct, as well as striking Waterfall initially after being charged. Whatever the case, this sparked brawls amongst players and fans alike. This heated goalless draw would come to be known as the Battle of Bramall Lane.

Nevertheless, the “Rules Derby” would continue to be staged between the two sides thereafter. In the modern day, Sheffield and their Countrymen counterparts are historical rather than divisional counterparts, with the teams now competing in the Northern Premier League and Northern Counties East League respectively.

Despite the difference in divisions, both still cultivate that friendly rivalry in exhibition matches, with Hallam winning the most recent fixture: a 2-1 victory at Sandygate Road in July 2021.

With thanks to Andy Dixon, Sheffield FC historian