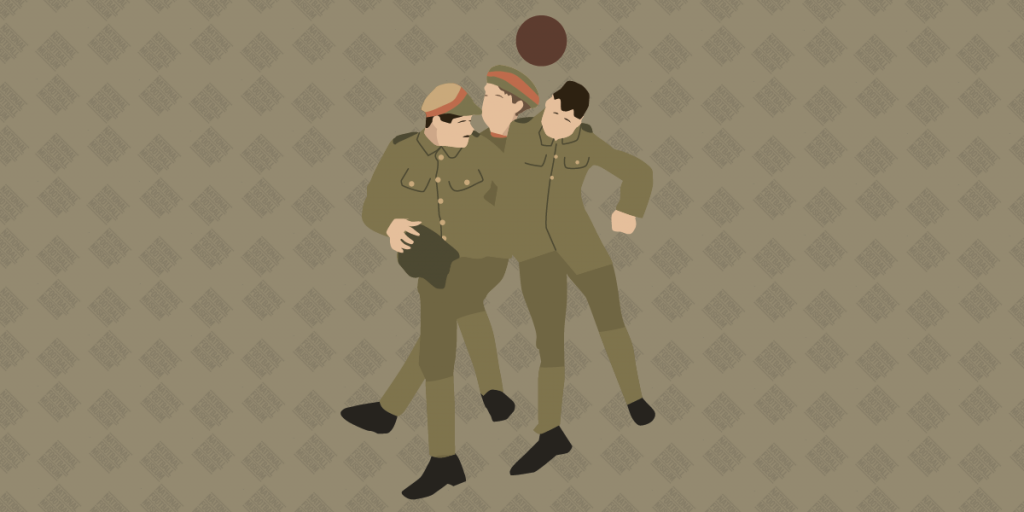 Football’s emergence as the national pastime is reflected in its perseverance and importance during the First World War, at once a morale-raising exercise and a charitable endeavour.

Prior to the outbreak of war, football’s popularity as a spectator sport had outstripped that of other games, and clubs had to build or extend grounds to accommodate for the additional demand. A record crowd of 121,919 packed into Crystal Palace to witness Aston Villa’s 1-0 win over Sunderland in 1913, while the following year, King George V’s presence at the final, handing the trophy to Burnley captain Tommy Boyle, gave the sport a de facto form of royal assent. 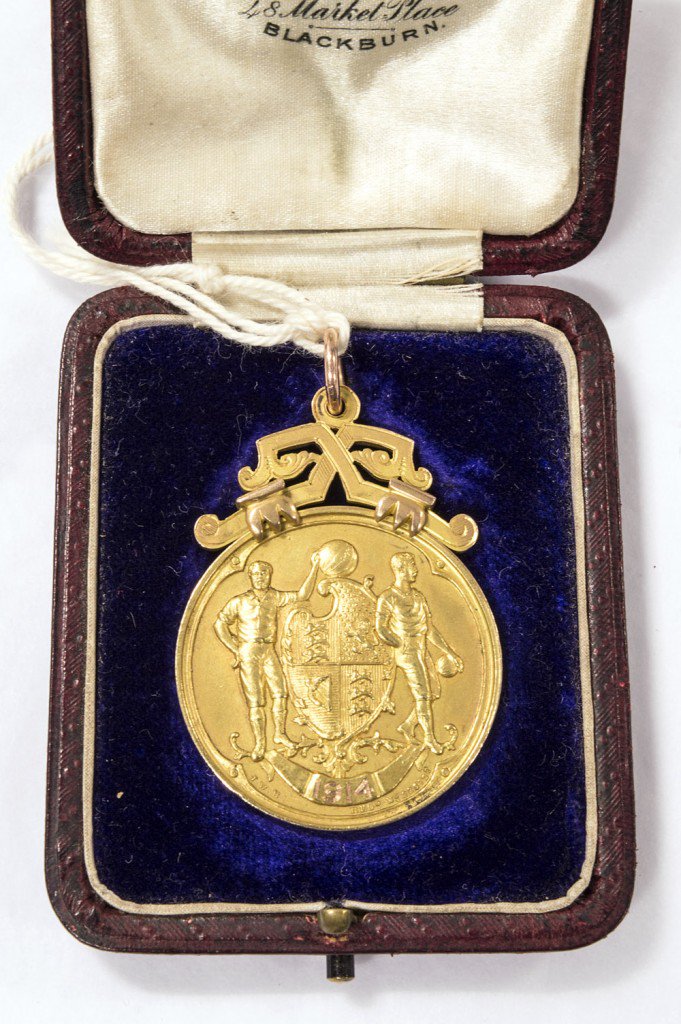 A winner’s medal from the 1914 FA Cup Final, won by Burnley’s Eddie Mosscrop.

However, football’s continuing growth was thrown into jeopardy by Britain’s entry into the war on 4 August 1914. Though the government urged the public to carry on as normal, football in this climate proved divisive: some perceived it as good for civil morale and recruitment, but others viewed it as unpatriotic, considering football to be folly when men of similar ages were fighting for their country in foreign lands.

Fact, fiction, or somewhere in between?

That first December at the Front – and football’s growing place within the narrative of the ‘Christmas truce’ – was subject to speculation, debate and outright myths.

Some soldiers wrote home about their experiences, occasionally noting that football was played but without much in the way of detail or elaboration. Others had heard of games taking place “down the line”, with one even suggesting an organised match that was won 3-2 by “the Saxons”, but these were not first-hand accounts. In a letter printed by the Sunderland Echo, one subaltern did suggest German counterparts would have liked to play, but “we had not got a football, (so) we had to call it off”.

The diary of Lieutenant Charles Brockbank, previously on display at the museum as part of The Greater Game exhibition, does denote an impromptu kickaround, though specifically not with a traditional pig’s bladder: “We had found a little rubber ball so, of course, a football match came off and we exchanged various things.”

Within the context of the various truces and ceasefires on the Front, reports of fractured but cordial conversations, exchanges of cigarettes and cigars, the sharing of tools and photographs, and the burying of the dead, are all far more common than explicit references to football.

In The Greater Game, Dr. Iain Adams notes that empty food cans and, in one case, a straw-stuffed balaclava would take the place of a football in the most casual of knockarounds. He suggests that, rather than any form of organised game with “stretchers for goals”, it was little more than a messy melée; “just soldiers running around like children playing football”.

Nevertheless, football worked its way to the heart of modern narratives about the truth through songs, films and even television adverts. While its place within the Christmas Day story is romanticised, there is no doubt that football had its influences and uses elsewhere during the war.

Football – and footballers – at the Front 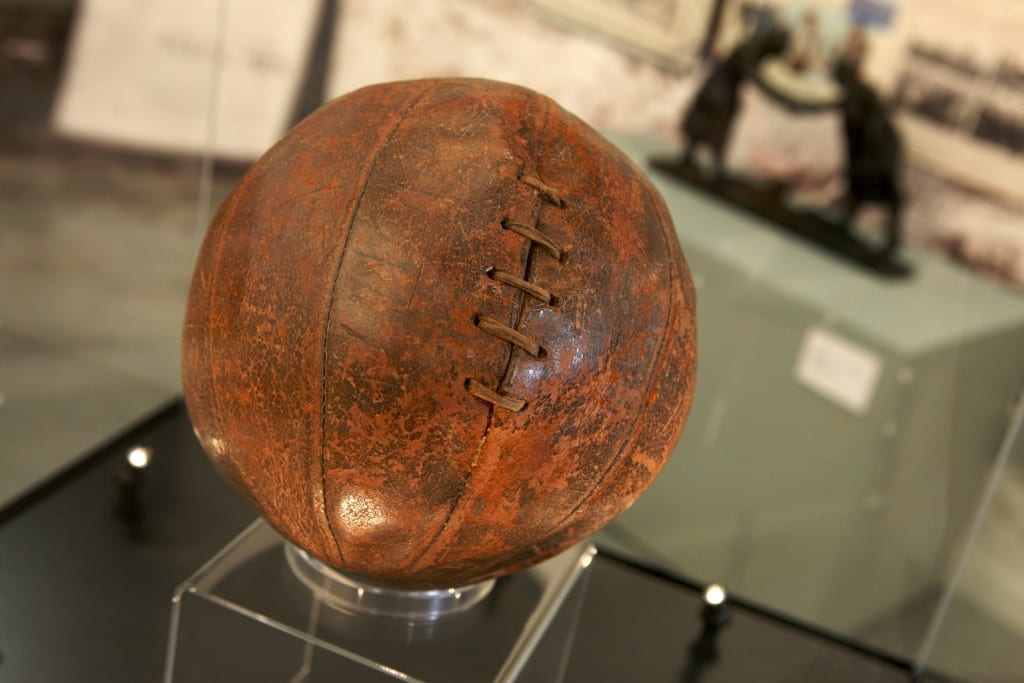 One of the surviving footballs from the Somme, used by Captain Nevill’s East Surrey Regiment to kick off an advance in 1916. Previously on display in The Greater Game exhibition.

Within the British Army, football was a hugely popular endeavour, with organised matches and tournaments played out: some even within range of enemy guns. The game was used to boost the morale of weary and physically drained soldiers, and by 1917 its recuperative and unifying benefits were formally recognised within the army’s training manuals, which actively encouraged the formation of games and competitions.

In some instances, footballs were not just used in leisure, but also in combat. Captain Wilfred Nevill of the East Surrey Regiment famously gave two balls to his troops to kick off the advance at the Somme; Nevill was killed in action, but the footballs made it to the German trenches, and Nevill’s men achieved their objective, albeit suffering heavy casualties in the process.

Football’s impact was not limited to soldiers playing football; footballers also became soldiers. A few weeks before Christmas, the Football Battalion – an infantry unit open to players and fans alike – was announced, with England international Frank Buckley the first player to enlist. 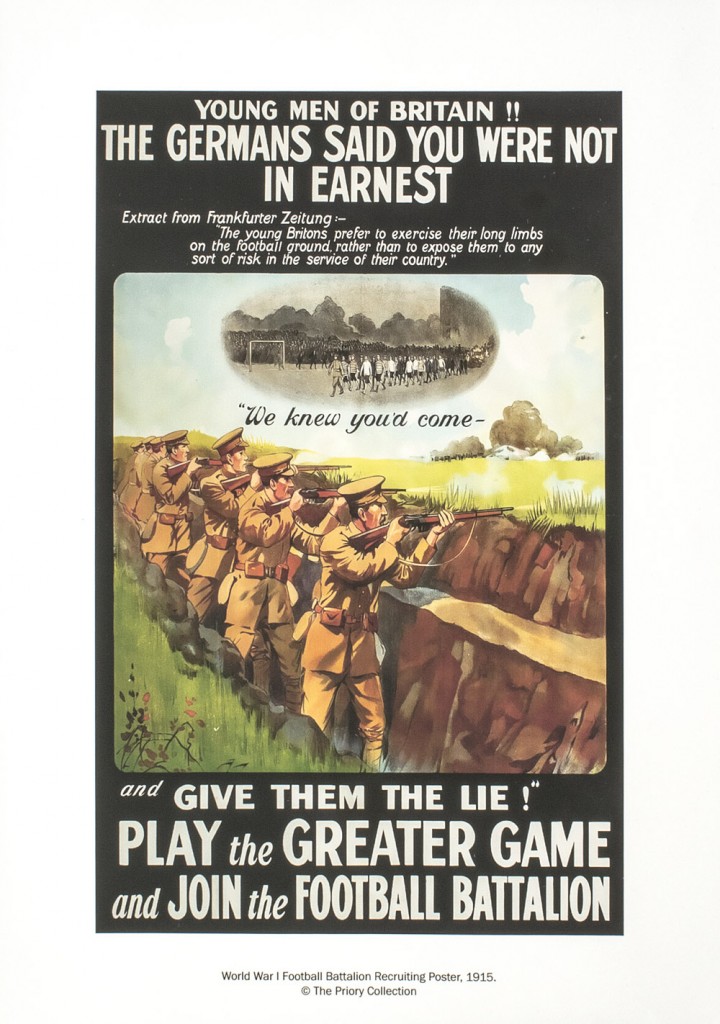 A 1915 recruitment poster encouraging men to enlist in the British Army.

In total, around two hundred players signed up to be part of the battalion and play their part in the war effort, which initially included ten apiece from Clapton Orient and Watford; forty-one members of the former club would ultimately join the cause.

The 17th (Service) Battalion, Middlesex Regiment would be sent to France in November 1915, fighting admirably in various battles at the Somme and elsewhere until its disbandment in early 1918. A second battalion, the 23rd, would see action on the Western and Italian fronts.

Of the 4,500 enlisted, approximately 900 lost their lives in service of their country, including Hall of Fame inductee Walter Tull.