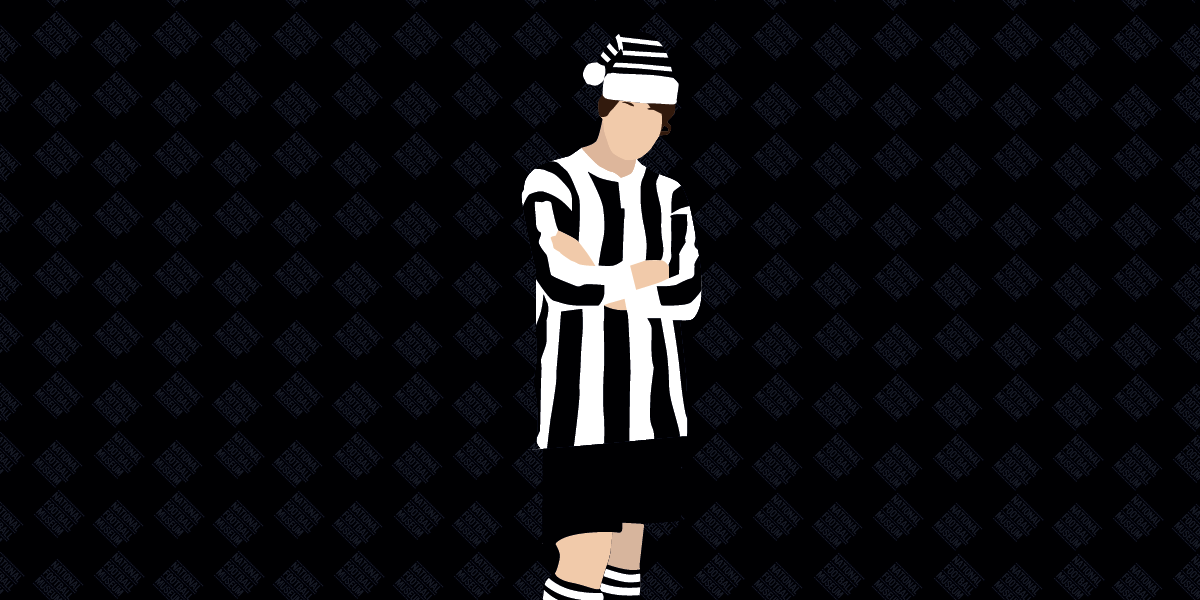 In wartime Britain, with millions of men serving their country at the Front, it was down to the women to keep the nation’s football culture alive.

By the early twentieth century, women playing football was not unheard of. While women’s teams had been formed in 1881 and the 1890s, hostility from male crowds and writers had discouraged the development of the women’s game. This changed with the outbreak of the First World War. With many men conscripted to fight on the continent, wives, sisters and daughters stepped in to occupy their male counterparts’ places in society, working on farms and in factories.

It was in the latter that one of the defining sides of the era was formed: Dick, Kerr Ladies, named after their employers, a locomotive manufacturer turned munitions factory in Preston. Having played regularly in the factory yard during quieter periods, the workers formed their own team, on the suggestion of office worker Albert Frankland. Frankland would become manager of the side, holding that position until 1957. 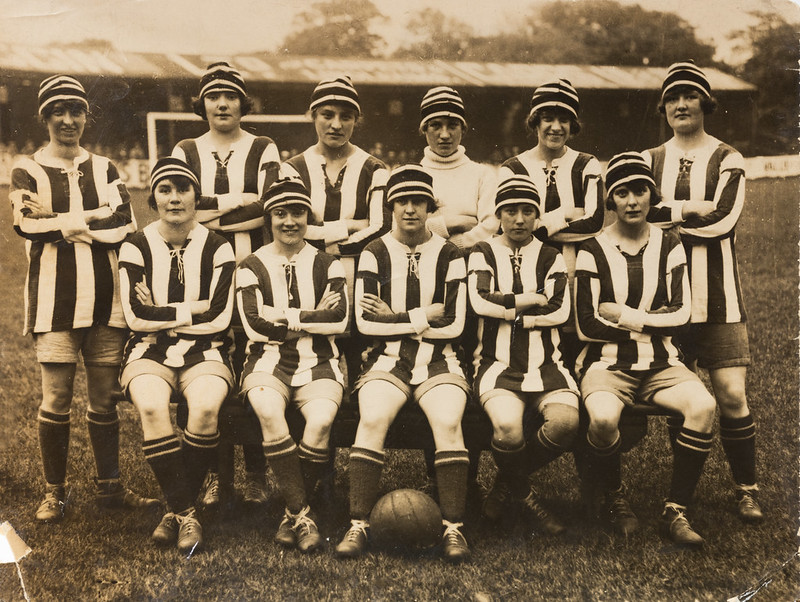 The women’s game had been growing apace during the First World War. One of the first “munitionette” games took place on Christmas Day in 1916, with Ulverston Munitions Girls defeating Ulverston Athletic 11-5. Local fixtures became a more regular occurrence throughout 1917; in the north east, a Munition Girls’ Cup ran from October 1917, with Blyth Spartans winning the tournament in May 1918.

Dick Kerr’s first ever fixture took place on Christmas Day 1917, facing off against Stockport’s Arundel Coulthard Factory. The Preston side did not disappoint Deepdale’s 10,000 spectators, running out 4-0 winners and raising almost £500 for the local auxiliary war hospital.

Over the Irish Sea the following day, 20,000 fans packed into Belfast’s Grosvenor Park to watch Tyneside Girls (or ‘England’ take on the Irish Girls (‘Ireland’) in aid of various war charities. Newcastle United legend and Belfast boy Bill McCracken, an organiser of men’s charity matches during the war, was the architect of the visit. Despite a gruelling festive schedule and a partisan crowd, the Tynesiders comfortably won the encounter by four goals to one.

The Dick, Kerr Ladies, meanwhile, continued to build their reputation throughout the latter stages of the war and beyond, playing at least fifteen matches over the course of 1918 and another ten in 1919. By the spring of 1920, the side were entertaining visiting French teams at Deepdale and Stamford Bridge to bumper crowds, returning the favour with fixtures in Paris and Le Havre that November.

A packed house at Goodison

The Dick, Kerr Ladies’ most famous festive fixture of all took place ten days later. At least 46,000 spectators piled into Goodison Park to see them take on local rivals St. Helen’s Ladies. Reports from the time vary as to the size of the crowd; some newspapers, such as the Lancashire Evening Post, reported that the attendance was as high as 53,000, with at least 10,000 ticketless supporters thought to be locked out. 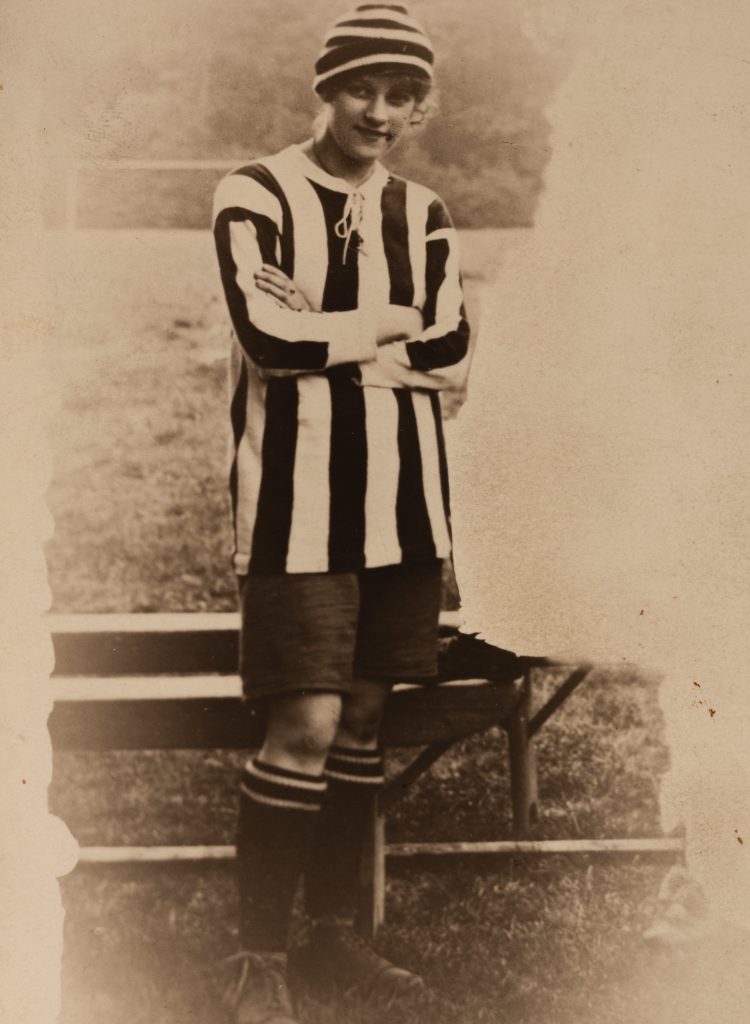 Dick, Kerr were forced to play without their star striker, Florrie Redford, who had missed her train to the game. Deputising strike partner Harris ensured her absence wasn’t too keenly felt, scoring the opening goal and impressing throughout; the Liverpool Echo reporter describing her as a “splendid little player”. However, the headlines were reserved for Alice Kell, who moved up front at the start of the second half and helped herself to a hat-trick. The Lord Mayor of Liverpool drew a close to the day with the presentation of a cup to the winners.

The Boxing Day game was enthusiastically praised in some press quarters, with the Echo stating that “the ladies at Goodison Park gave us all much pleasure. We appreciated their skill, their stamina, their determination and their manner of taking hard knocks without ‘turning a hair’.” Many, such as the Lancashire Evening Post and Dundee Courier, highlighted the staggering attendance and the amount raised – over £3,000 (over £135,000 in today’s money) for ex-servicemen’s charities.

That Goodison crowd was a record attendance for women’s football in this country up until the 2012 Olympics, when 70,584 fans bore witness to Great Britain’s 1-0 defeat of Brazil at Wembley.

Within a year of establishing that 1920 record, however, the women’s game was stymied – by none other than football’s own governing body.

The FA ‘ban’ on women’s football 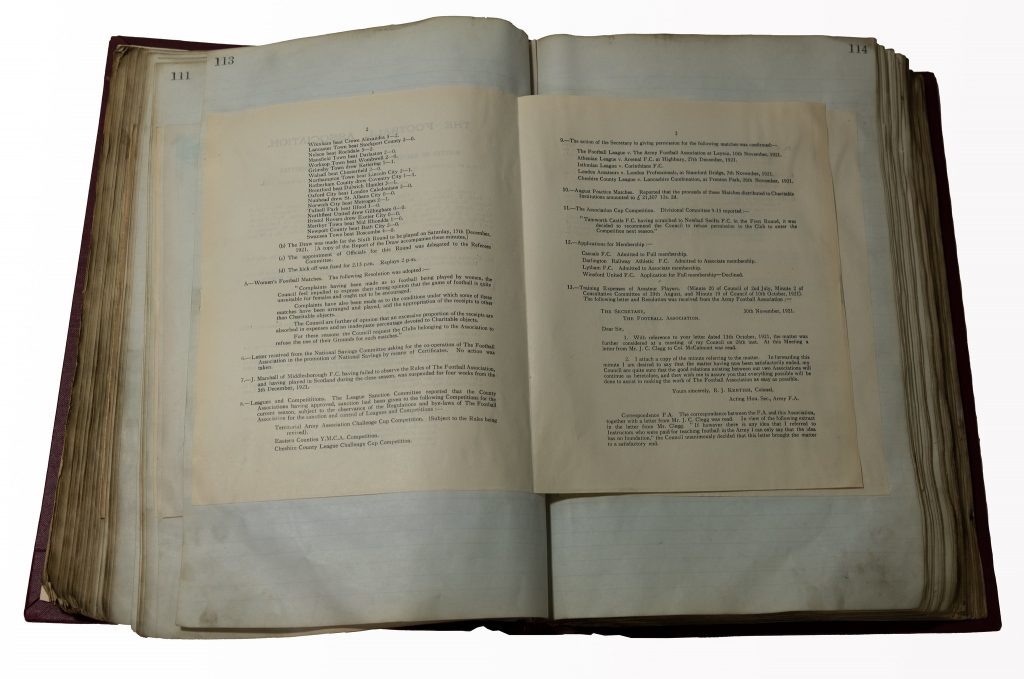 Ostensibly concerned with the amount of gate receipts that were “absorbed in expenses and an inadequate percentage devoted to Charitable objects”, the FA moved to ban women from playing football on the grounds of any of the Football Association’s member clubs. The Council “express(ed) their strong opinion that the game of football is quite unsuitable for females and ought not to be encouraged” – though it had been encouraged during the war as a way of boosting morale and raising much-needed charity funds.

And so, on Sunday 5 December 1921, four sentences in an FA minute book condemned the women’s game to the fringes. Dick, Kerr Ladies continued to play in the following decades, but the frequency of fixtures and wider interest would dwindle.

The FA ‘ban’ was belatedly lifted by 1970, when the FA Council rescinded their 1921 resolution; almost fifty years after its imposition. Despite the valiant grassroots efforts of the newly-formed WFA, who kept the women’s game alive for the interceding five decades, women’s football would not match the heights of that Boxing Day afternoon for the remainder of the century.