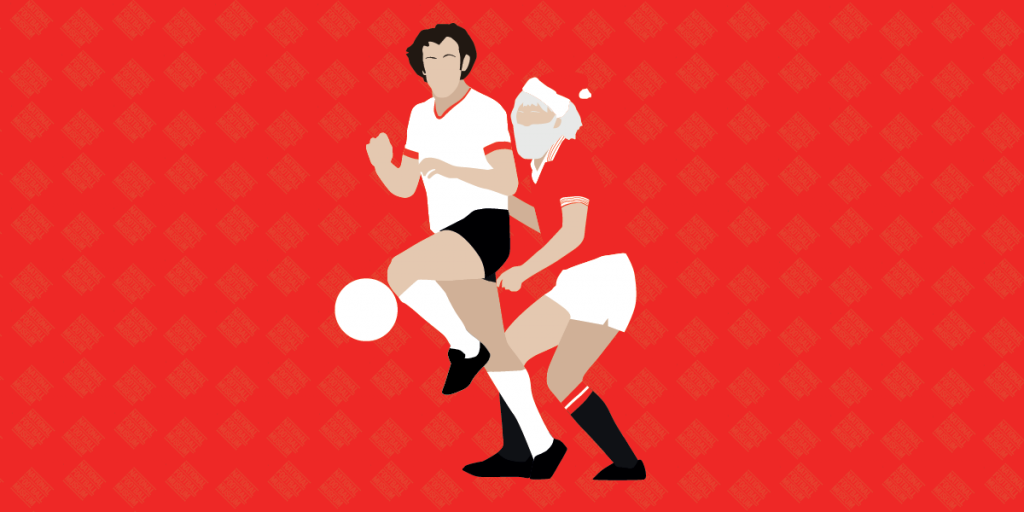 The rivalry between Liverpool and Manchester United predates the formation of both clubs, going back to the city’s industrial competition; the creation of the Manchester Ship Canal in 1894 drew further enmity from those on the Mersey, whose shipping docks were a key source of income.

By the end of the Second World War, Liverpool had won four titles to United’s two, though the latter had also won the FA Cup in 1908-09. It wasn’t until the early sixties, and Liverpool’s appointment of Bill Shankly, that the North West rivals were in direct competition with one another. 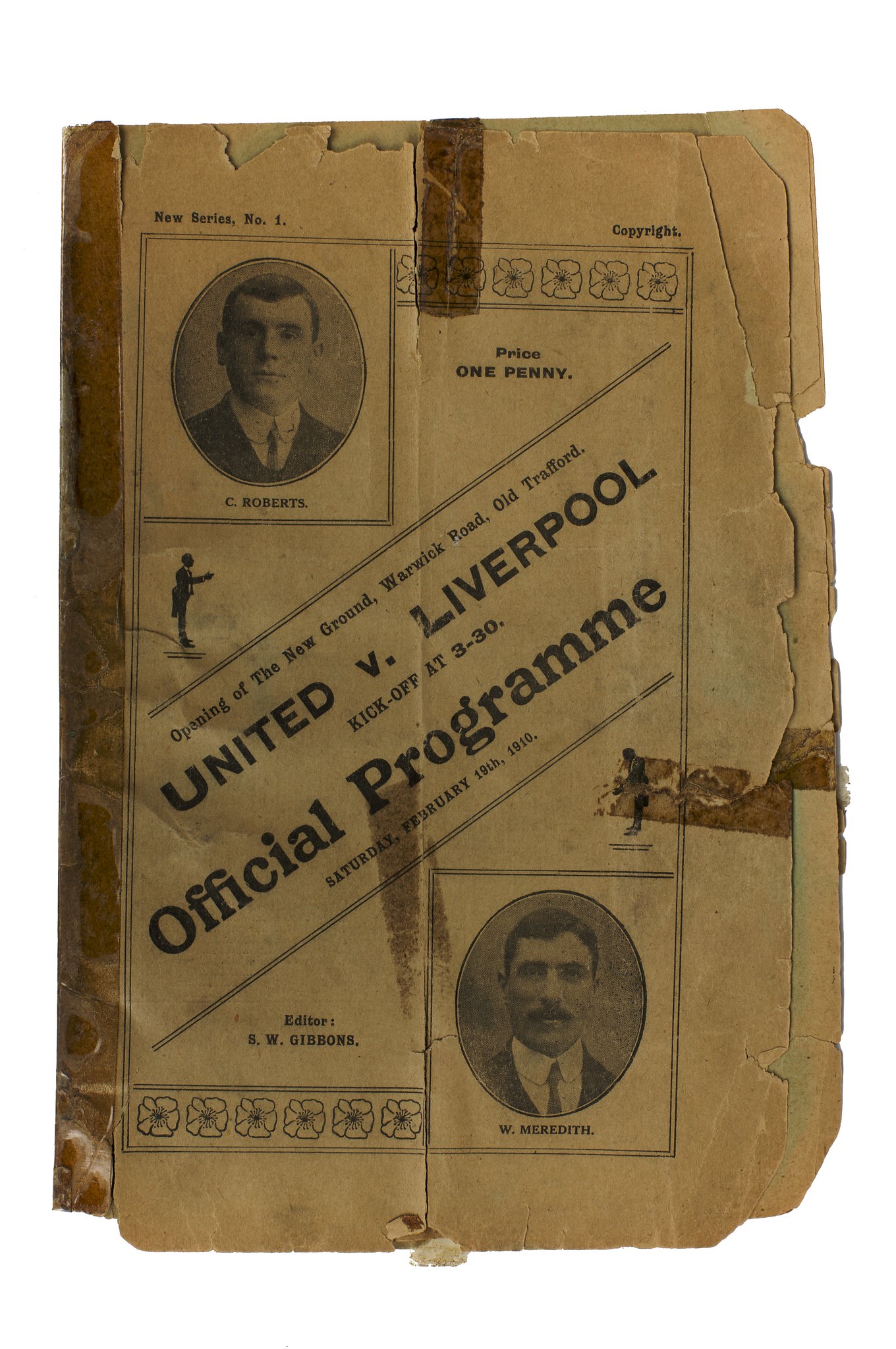 A matchday programme from the first game at Old Trafford, staged between Manchester United and Liverpool in 1910.

They shared four titles in as many years in the sixties, but the Merseysiders, led by Shankly and his successor, Bob Paisley, would go on to dominate the seventies domestically and on the continent, with the post-Busby United unable to emerge from their shadow.

By the late seventies, a competitive but relatively friendly football rivalry was still intact. At the 1977 FA Cup Final, United defeated the First Division champions at Wembley in a pulsating encounter, courtesy of a fluke Jimmy Greenhoff goal. Though the defeat ended their Treble hopes, Liverpool fans were reportedly magnanimous in defeat, and some jubilant United fans sang along to You’ll Never Walk Alone and serenaded them with chants of ‘Liverpool, Liverpool’. Within four days, the defeated FA Cup finalists were lifting the first of their six European Cups.

That FA Cup triumph proved to be something of a false dawn for United; they ultimately finished 22 points adrift of Nottingham Forest at the end of the 1977-78 campaign. Though Liverpool finished a distant second that year, they did mount a successful defence of the European Cup.

As Christmas 1978 approached, Liverpool had already established a 12-point lead over their Manchester rivals. However, despite Liverpool’s dominance throughout the period, Old Trafford still remained something of a fortress: the last stronghold for United supporters. The Red Devils had not conceded a single goal at home to Liverpool in five straight games prior to that Boxing Day meeting.

Previous Boxing Day meetings between the two teams were generally drab affairs. In seven fixtures taking place between Christmas Eve and Boxing Day, only two games resulted in victory – United’s 3-1 win in 1904, and a 2-0 Liverpool victory in 1927, both coming the day before Christmas. In four of those fixtures, the result was a boring no-score draw.

Dave Sexton’s side came into the Boxing Day encounter off the back of a 3-0 humbling at Bolton Wanderers. The Reds had also suffered a defeat of sorts in their last match, winning the second leg but losing the Super Cup on aggregate against Anderlecht in heavy Anfield fog: conditions described as “ridiculous” by Paisley.

The home support may have been cautiously optimistic, but their ramparts were breached by Liverpool as early as the fifth minute. Jimmy Case was the provider, his inviting cross looped over ‘keeper Gary Bailey by the unmarked Ray Kennedy. The goal was described by The Guardian’s Patrick Barclay as “a shambles”, with centre-halves Martin Buchan and Gordon McQueen affording Kennedy a free header.

Kenny Dalglish and Terry McDermott were pulling the strings at Old Trafford, and the former was influential in Liverpool’s second goal. The Scot’s firm shot in the 25th minute could not be held by Bailey; the rebound fell to a grateful Case, who slammed home from close range. United almost halved the deficit when McQueen headed against the crossbar, but were deservedly two behind at the interval. 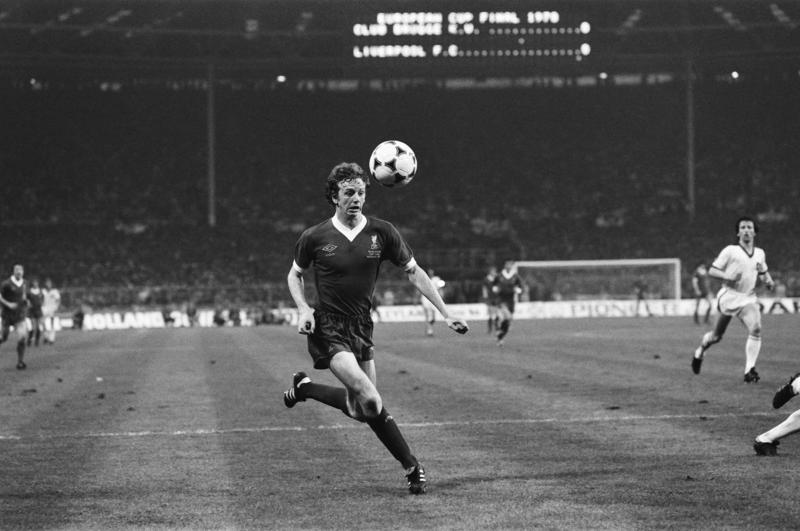 Despite United improving, a third goal looked most likely from the Reds. It eventually came in the 67th minute through a brilliant piece of individual skill from David Fairclough. The flame-haired forward had carved out a reputation as a super-sub, previously kept out of the starting eleven by John Toshack and Kevin Keegan. His most famous goal, a late strike against Saint-Etienne, kept Liverpool’s 1977 European Cup dreams alive; they went on to lift the trophy in Rome.

Fairclough had not featured in the First Division that season, but had scored in the previous game against the Belgians. He kept his starting place for the Boxing Day game alongside Dalglish; after a quiet first half, Fairclough came alive in the second. With a drop of the shoulder and a quick turn of pace, the striker beat no fewer than four men before clipping the ball beyond Bailey. According to The Liverpool Echo, the goal “brought even the Mancunian fans to their feet”.

“That should do David a world of good and give new confidence,” said Bob Paisley post-match. Unfortunately, a run of strong form did not transpire. Fairclough made just six more appearances that season, scoring the winner against West Brom in February 1979, before injury in the Merseyside derby curtailed his season two months early.

Newspaper reports the following day drew stark comparisons between the state of the two clubs. Liverpool were described as “a different class” and “seemed a side without a real weakness” by the Echo, while The Guardian highlighted several excellent performances, McDermott the pick of the bunch.

Those same reports were equally scathing about United. Barclay said that “few of their players seemed capable of transferring the ball from A to B”, and suggested that “they surely cannot play as badly again”. The Echo, meanwhile, characterised Sexton’s United as “a tired and tattered side”.

Sexton himself claimed that the Reds “are as good as most in Europe and should be a cert for the championship” – an admission that would seldom be heard coming from a modern-day United manager. However, he wasn’t wrong. Liverpool would go on to win the title by eight points, defending it the following season. That dominance continued into the eighties, when the Reds won the championship six times in ten years under Paisley, Joe Fagan and Dalglish.

United, meanwhile, would win three FA Cups to Liverpool’s two in that period, though they did dominate the League Cup in the early eighties. A previously healthy rivalry intensified throughout the decade. Liverpool fans, for all their success, felt underappreciated compared to United; United’s fans resented Liverpool’s all-conquering triumphs.

Against a backdrop of increasing hooliganism on the terraces and the surrounding streets, it all came to a head in the mid-eighties. Two ferocious (in some cases frightening) FA Cup semi-final encounters set the tone, as did the “tear gassing” of United players and staff prior to a 1986 fixture. Sir Alex Ferguson arrived at Old Trafford later that year; unlike the more cordial Busby, the firebrand Scot would stoke the increasingly bitter rivalry between the two clubs.

Towards the end of the decade, the fixture was one of the most hotly-anticipated on the calendar, owing to the passion and vitriol on display, on the pitch and from the surrounding stands.

Did it all escalate from that Boxing Day defeat? Probably not. But the humbling in United’s own back yard did signify the differing trajectories of the two northern powerhouses, and arguably laid the groundwork for one of the most intense rivalries in modern English football.