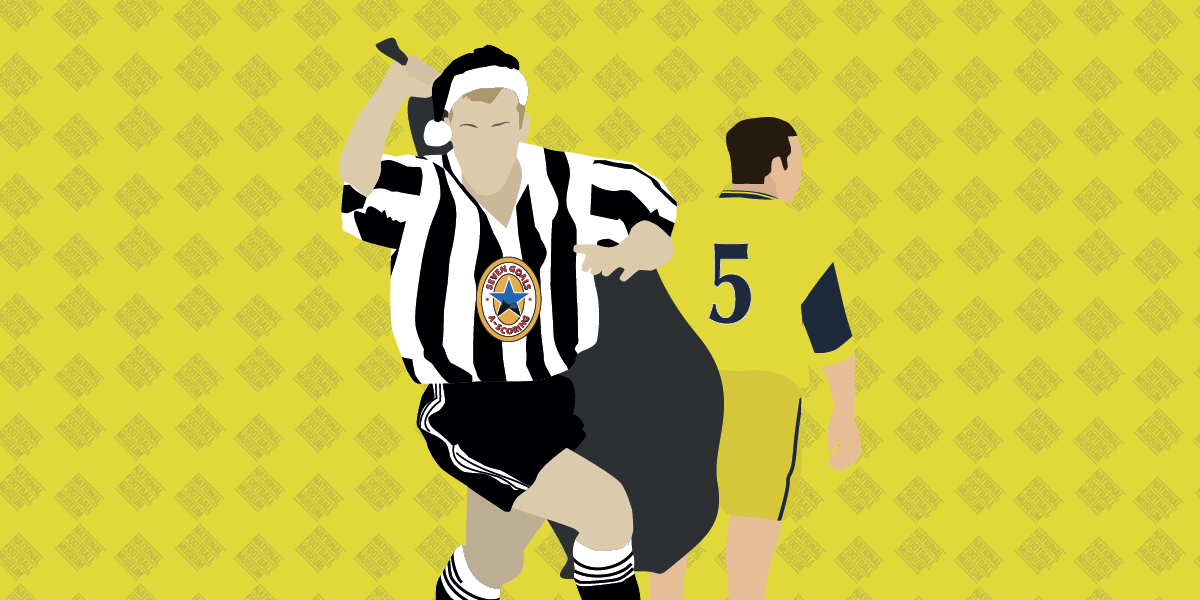 Christmastide 1996. The Wizard of Oz and Jurassic Park were on television; Schwarzenegger and Stallone’s latest releases were showing at all participating cinemas; and the Spice Girls scored the first of three consecutive Christmas number ones. But the best entertainment was reserved for patient Newcastle United fans.

During the early and mid-nineties, the Magpies were nothing if not entertaining. Kevin Keegan not only prevented what looked like an imminent slide into the third tier for the first time in NUFC’s history: he transformed the squad, the training ground and the atmosphere around the club. In his first full season, Keegan’s squad – featuring expensive but shrewd signings, as well as a core of promising youngsters – were promoted as champions.

An emphasis on attack saw Newcastle emerge as one of the most enthralling sides to watch in the early days of the Premier League. Their title challenge in 1995-96 has gone down in football folklore as one of the most glorious sporting failures (though failure is a strong word).

United were ten points clear at Christmas, but a high-octane end to the season – featuring a helter-skelter 4-3 defeat to Liverpool, Keegan’s infamously impassioned Sky Sports rant, and two draws at the end of the season, saw Newcastle finish four points shy of a resurgent Manchester United.

The team that held United at St James’ Park on that final day was Tottenham Hotspur. Newcastle exacted some measure of revenge the following September, a Les Ferdinand double inflicting defeat on the hosts at White Hart Lane.

However, even with record signing Alan Shearer back home and leading the line, Newcastle could not repeat the feat of the previous campaign. A famous 5-0 drubbing of arch rivals Manchester United was a distant memory by Christmas. A seven-game winless streak stretching back to mid-November, culminating in a 1-0 defeat at Shearer’s old club Blackburn Rovers, saw the Tynesiders eight points adrift of league leaders Liverpool by close of play Boxing Day.

Their goal difference was also significantly lower than that of the Reds, as well as fellow challengers Arsenal and Manchester United. That would change dramatically within two days. 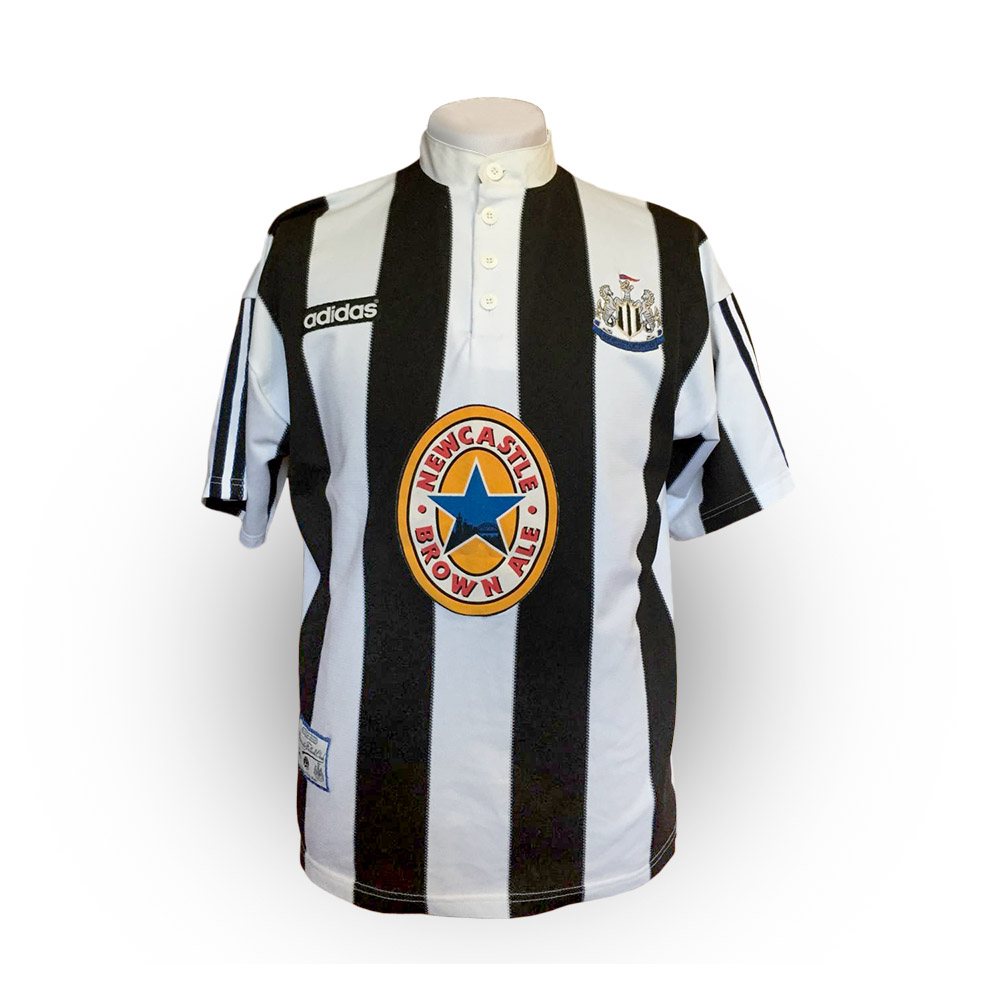 Tottenham Hotspur were the unfortunate visitors to SJP that Saturday afternoon. Shearer had endured a rare off day two days prior, marshalled out of the game by former teammates Colin Hendry and Henning Berg. His position in the starting line-up was never in doubt, but Keegan did make two changes, replacing out-of-form goalkeeper Pavel Srnicek and left-back Robbie Elliott with Shaka Hislop and John Beresford respectively.

Coming into the game, Spurs were eighth in the table. Their previous result, a 3-1 win over Southampton, had taken them to within touching distance of Newcastle in sixth, and Gerry Francis understandably kept the faith with an unchanged starting eleven.

Shearer looked like a man on a mission from kick-off, and sent the Gallowgate into a frenzy with the opening goal after twenty minutes. Strike partner Les Ferdinand did well to flick a header towards Shearer, but the number nine deserved the lion’s share of the credit, racing around future teammate Stephen Carr and expertly providing the finish.

Within three minutes, United had doubled their advantage. A typical low cross from Northern Irish winger Keith Gillespie was met by Ferdinand. The forward fell as his effort was blocked, but sprang upright to turn Peter Beardsley’s shot past Walker from close range.

The majority of the 36,308 inside St James’ Park were happy at half-time, but there was plenty more to come as Kevin Keegan’s side summoned up the ‘Entertainers’ gusto of the previous season. Just shy of the hour mark, Ferdinand grabbed his second, meeting an inviting Beresford cross at the back post. Then, not two minutes later, Rob Lee was met with little resistance as he sauntered towards the edge of the area, unleashing a low drive into the bottom corner.

One of the fans’ favourite goalscorers, Philippe Albert, was on target for Newcastle’s fifth. The marauding centre-half had scored one of United’s all-time great goals two months prior with a sublime chip over Peter Schmeichel. The defender made a fine off-the-ball run into space, and was picked out by the excellent Lee. “What is the centre-half doing on the edge of the opposing box with nobody around him?!” barked the commentator after Albert slammed home.

Not content with registering their second 5-0 win of the season, the Geordies continued to pour forward. Rob Lee was instrumental in providing the sixth, sliding a David Batty cross into Shearer’s path. The unmarked Shearer did the rest, hammering in a low volley with eight minutes remaining.

With the crowd in full voice, there was still time for a seventh. Shearer would have completed his hat-trick with a diving header were it not for a brave stop from Walker, but the ‘keeper could do little about another Rob Lee drive, arrowed in from twenty yards after a fine tee-up from Batty.

A late goal from Allan Nielsen, taking advantage of Beresford’s indecision in the area, did little to take the shine of the emphatic victory. The three points – and the margin of victory – saw Newcastle leapfrog Aston Villa into sixth, just three points shy of Manchester United and Arsenal in second and third respectively.

Keegan had little time to revel in the victory, taking flight from St James’ Park straight after full-time to care for his flu-ridden wife. In his stead, assistant Terry McDermott referred to the performance as “getting back to normal”, insisting that they were “capable of putting a run of eight or nine games together”.

Spurs boss Gerry Francis suggested that “their chances were going in and ours weren’t” – an almost comical assessment of the day’s play. He also said he was pleased that they had not “capitulated like they did at Bolton Wanderers”, referring to a 6-1 League Cup defeat the previous month – despite shelling four goals to Newcastle in the game’s final eleven minutes.

Unfortunately, the season of good cheer did not last long for Newcastle fans. Just two days after a draw at Charlton Athletic in the FA Cup, Kevin Keegan shocked the Newcastle board – and the wider football world – with his sudden resignation. “I feel I have taken the club as far as I can,” said Keegan in a short statement. Kenny Dalglish took the reins and guided Newcastle to a second consecutive runner-up spot, but the Entertainers era was coming to an end.

Keegan returned briefly as United manager in 2008, but left amid disagreements over the club’s recruitment structure and policy.

“King Kev” remains a legend on Tyneside: his last big hurrah delivered the Premier League’s largest winning margin for a game staged between Christmas and New Year. The very definition of festive entertainment.