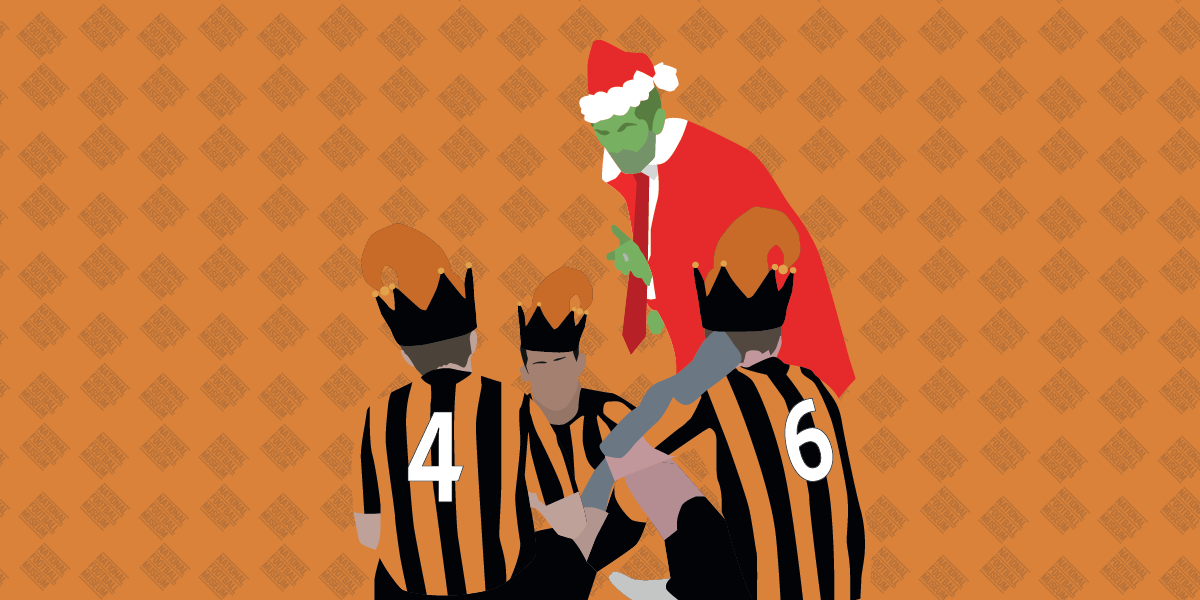 Some player celebrations – the Shearer one-handed salute, the Klinsmann ‘dive’, Gazza’s dentist chair and Balotelli’s tongue-in-cheek t-shirt – achieve a fame all of their own. The same occasionally applies to the managers on the touchline.

Some, like Mourinho’s knee slide, Pleat’s on-field jig or Pardew’s scarcely believable FA Cup jive, are expressions of joy in the immediate aftermath of triumph (sadly for Pardew, that joy did not last long). But those that live longest in the memory are moments of infamy – particularly when they’re also amusing.

Kevin Keegan’s rant on Sky Sports was the defining moment of a rollercoaster 1995-96 season. Louis Van Gaal’s spectacular imitation dive – his unflinching stare never leaving fourth official Mike Dean – endeared him to Manchester United fans in an unorthodox way. But one of the most spectacular manager meltdown occurred not on the sidelines, but on the field of play itself.

Fortunately for our Twelve Games of Christmas series, it also happened on Boxing Day.

Roaring into the top flight

For the first time in their history, Hull City were competing in the top tier of English football. Phil Brown had guided Hull to the Championship play-offs in his first full season as manager. A goal from a veteran local, club legend Dean Windass, was enough to see off Bristol City in the Wembley final and secure a Premier League place for the 2008-09 season. 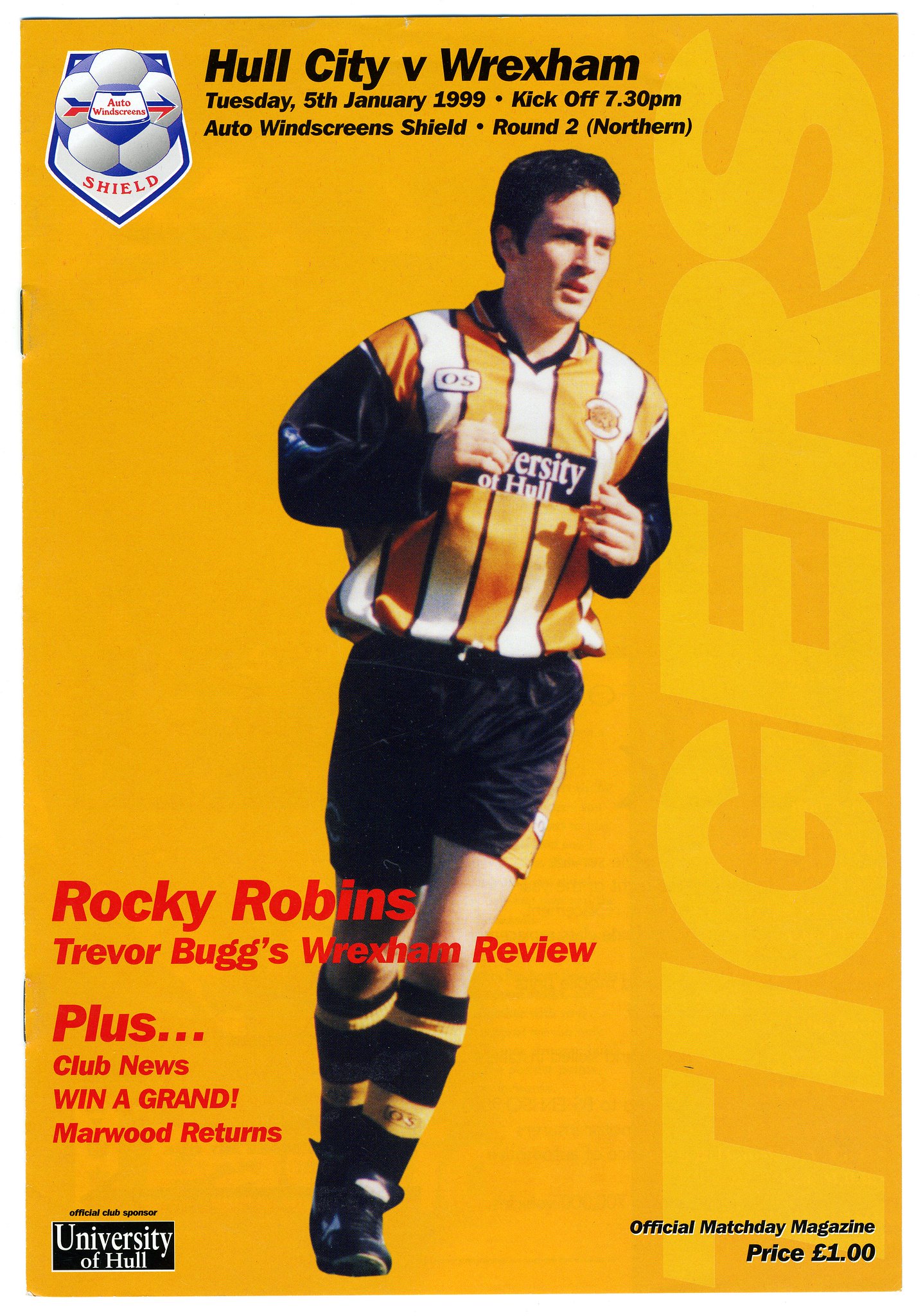 Less than a decade prior, Hull City were Third Division relegation candidates, competing in competitions like the Auto Windscreens Shield.

Brown drafted in plenty of new blood on a relatively modest budget ahead of the campaign, and many of those signings paid immediate dividends. Geovanni, recently released by Manchester City, scored Hull’s first ever Premier League goal on the opening day of the season: he would net seven more by the close of play in May.

The new boys shocked the established order in the competition’s first three months, losing just one of their nine opening fixtures: a 3-0 win at West Brom saw them as high as third in the table, just three points shy of its summit. The honeymoon period was one of glorious optimism for Hull fans, but reality would catch up with the East Yorkshire side in the coming months.

City picked up just three points in six games amidst a particularly tricky run of fixtures. However, Hull remained well placed towards the top end of the league. A late Marlon King penalty at home to Middlesbrough shook them out of their winless streak, before earning a hard-fought and credible point at Anfield one week later.

Brown’s boys were brought down to earth with a bump before Christmas, suffering a surprise 4-1 defeat at home to relegation battlers Sunderland. Afterwards, the manager allayed any fears of a drop down the pecking order, saying: “we’re still ahead of schedule, don’t forget that”. Survival, rather than European qualification, was very much still the goal.

The emotive coach would have expected a positive response from his charges in the Boxing Day fixture six days later. The Black Cats’ victory at the KC Stadium moved them out of the relegation zone at the expense of Manchester City, who suffered a 2-1 reverse at West Bromwich Albion. The nouveau riche side, taken over by the Abu Dhabi United Group on transfer deadline day, had not tasted victory in their last four outings, including a home derby defeat to Manchester United.

At the Hawthorns, City boss Mark Hughes stormed down the tunnel at the final whistle, and had much to ponder ahead of Boxing Day. Lackadaisical performances in training, erratic behaviour and a general sense of disillusionment with events at the City of Manchester Stadium were all causing headaches for Hughes, whose cause wasn’t helped by the absence of Brazilian star Robinho.

All the goals from a 5-1 victory against @HullCity in 2008 is our #ThrowbackThursday for today..! Enjoy! #mcfc #tbt pic.twitter.com/Ls08zxH38t

The high-profile £32.5m signing missed the defeat at West Brom, but his impact and quality was keenly felt from the get-go on Boxing Day. The striker sliced open the Hull defence with a diagonal ball over the top to Stephen Ireland. The midfielder’s tempting cross was turned in by Felipe Caicedo on 15 minutes.

The pair linked up again six minutes later to put Hull in serious trouble. Ireland burst clear down the right and pulled the ball across for the Ecuadorian striker, who tucked it away first-time from the eight yards out. Within a minute, the game moved into rout territory. The lively Ireland was at it again, robbing George Boateng and finding Robinho. The former Real Madrid prospect effortlessly cut inside Michael Turner and placed a finish low in the bottom corner.

The Tigers’ full-backs had struggled to contain City’s widemen throughout the first half, and Kamil Zayatte couldn’t get anywhere near the pacy Shaun Wright-Phillips. The England winger’s whipped low delivery was on a plate for Robinho, steering home from close range to compound a thoroughly miserable first forty-five minutes for the visitors.

The Premier League’s most famous (and most public) team talk

Hull’s players may have been looking forward to a regroup in the comparative warmth of the dressing room, but their manager had other ideas. Dragging his beleaguered players towards the South Stand, Phil Brown applauded the visiting support – then proceeded to hold his half-time team talk in full view of 3,000 travelling fans.

The players formed a sitting circle as Brown lectured the various members of his side, arms gesticulating and fingers pointing in various directions. The starting eleven looked shell-shocked as Brown delivered his two-minute tirade, before eventually allowing players and staff alike to retreat down the tunnel.

Did the tactic work? In a sense. Retreating into damage limitation mode, Hull prevented the hosts from scoring for forty minutes, and even grabbing a consolation goal themselves through Craig Fagan. However, man-of-the-match Ireland would restore that four-goal cushion two minutes later. In the cold light of day, 5-1 still represented a drubbing, but the Tigers could take some pride from their second-half performance.

It is all too easy with the benefit of hindsight to claim that this watershed moment would lead to Hull’s unravelling over the next eighteen months, but the players themselves, while disagreeing with the nature of the team talk, did not subscribe to that theory.

“We didn’t see what the fuss was about at the time and it was only later on in the night that all the pundits started getting involved,” Dean Windass told The Yorkshire Post. “None of us lost any respect for the manager.” Likewise, Geovanni – who considered Brown to be “one of the best managers I ever had” – said of the infamous team talk: “it happened, it’s something we accepted even if we didn’t like it.”

Hull cascaded down the table thereafter, winning just one game in their remaining nineteen fixtures, courtesy of a last-gasp Manucho goal at Craven Cottage in March. Incredibly, in a sport where loyalty was an increasingly rare commodity, the club stood by Brown during this increasingly worrying period.

Though Hull lost at home to Manchester United on the final day, fellow relegation candidates Newcastle United failed to achieve the single point required to survive at Aston Villa. With the Tigers’ Premier League status preserved, Brown – microphone in hand, goatee around his broad smile – serenaded the fans with an impromptu version of Sloop John B (thankfully, the jubilant Hull fans joined in).

The legacy lives on

That wasn’t the end of the Phil Brown team talk story. The two teams met again at Eastlands the following November, when a late Jimmy Bullard penalty cancelled out Shaun Wright-Phillips’ opener. Bullard, renowned as a jovial character with a penchant for practical jokes, sat his teammates at his feet and subjected them to a mock lecture, imitating his manager’s infamous dressing-down.

Too pre-occupied to see it live, Phil Brown admitted enjoying a replay of the celebration, calling it a fantastic celebration: “I couldn’t deliver my post-match speech I was laughing so much.” Bullard would claim that the entire team agreed that any goalscorer that day would have to perform the role of Brown in the celebration: fortunately, that honour fell to one of football’s funnymen.

“I think Paul McShane will be the one to take the flak for it,” said Bullard post-match, hoping to direct the blame elsewhere. Brown wasn’t having any of it: though he gushed over the celebration in his post-match conference, the manager is said to have gently suggested that Bullard should “wind his neck in”!