Sir Alex Ferguson is one of the football legends featured in the museum’s new exhibition: The English Football Hall of Fame.

From his working-class roots in Glasgow to his career as one of the greatest football managers of all time, a new film Alex Ferguson Never Give In details a remarkable life.

While recovering from a brain haemorrhage, Sir Alex intimately recounts details of his life and career to his son Jason, including his legendary 26-year tenure as manager of Manchester United.

We spoke to Jason to find out more… 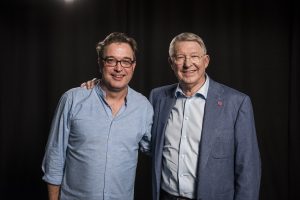 The film starts with the 999 call you made after your dad had collapsed. How difficult was it to include that?

Jason: The intention was always to make a film that was intimate and very personal. So you have to include the 999 call. It was quite a long process to get hold of that recording. One day a courier arrived with a CD of that recording and I realised what it was. There is a lot of emotion in that call. There was no choice but to include it in the film.

Jason: He was in a little side room the day after the operation. In the main ward at the ICU there was four or five other beds. There was another family there and they were howling, just saying goodbye to their mum…You realise how close he was. Walking out knowing he had survived and there was just this massive relief. Dad had survived but there was a way to go…

Jason: We had a good archive team and I gave them a list of what I wanted. ‘There’s an apprentice strike in Glasgow, April 1960, Can you find anything? even a newspaper clipping…’ I got a text a month later and it was photo of him. That was the golden nugget that was found in a little library in Scotland. 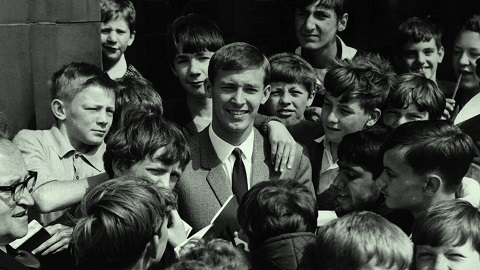 People know about Alex Ferguson the manager but not necessarily the player. He had an amazing left foot judging by the goals in the film…

Jason: He was actually right footed. As a young player he practised so much with his left foot it became his better foot.

There are heavyweight issues in the film. We see how he experienced sectarianism as a young player in Glasgow and was blamed for Rangers’ losing the 1969 Scottish Cup Final…

Jason: The objective was to make a film that wasn’t about football. The issues go deeper than football. The time at Rangers was one of the key moments in his life. It drove him. He could have gone two ways and we know which way he did go. The core theme in the film is that he is not defined by success. He is ultimately defined by how he has dealt with adversity, both personally and professionally. People view his life as Manchester United and success. Younger people don’t realise how hard it was at United to start with. I don’t think people factor in what he achieved at Aberdeen. 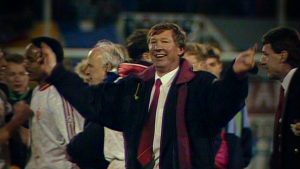 Jason: Aberdeen used to train in the local park, car park or beach. They used to phone the coastguard the night before to see what time the tide was coming in and then my dad would phone round the players to let them know what time training was. It’s ludicrous to think now. And then four or five years later they beat Real Madrid in a European final.

The pinnacle of Alex Ferguson’s career was that night at the Now Camp in 1999 when United won the European Cup. We don’t see much of that action in the film though… it’s largely focussed on the manager…

Jason: It wasn’t about what was happening on the pitch. It was about what he was going through at that moment. It was the pinnacle of his career. It encapsulates his key philosophies. This was the one thing he had left to achieve in his professional career. And it’s tied in to the whole theme of adversity. I just felt it was the perfect way to illustrate that this moment was about more than just football.

What does he think of the film?

Jason: He saw it for the first time three weeks before it was finished. It was emotional for him. Especially some of the stuff around his brain haemorrhage which he wasn’t aware of, like the doctors saying he had an 80% chance of dying. There was a long pause. 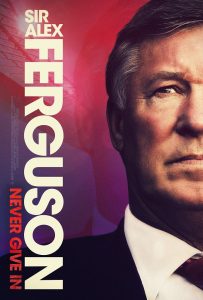 Sir Alex Ferguson: Never Give In is in UK cinemas from 27 May and on Amazon Prime Video from 29 May.