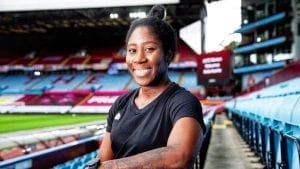 Anita Asante is a centre-back capped by her country 71 times and was a member of the GB Women’s Team at the 2012 Olympics playing in all four matches.

Her club career highlights include winning the quadruple with Arsenal in 2007 and trophy success overseas with Sky Blue FC in America and Kopparbergs/Goteborg FC in Sweden.

Did you always dream of being a footballer?

No. I didn’t always dream of being a footballer because I didn’t know or see it as a viable career path when I was younger, since the game was not professional for women.

What were the hardest hurdles you overcame to make it in the game?

I think the hardest hurdle was balancing my education with my dedication to football; as well as sacrificing time with friends and family for football training and matches.

It was incredible feeling to represent England because I got to establish myself as one of the best in the country and be surrounded by elite talent that I could develop and learn from too.

I felt very proud to represent my family and the country and it just motivated me to always want to give and try my best.

How did it feel to play at the Olympic Games?

I don’t think anything will or can replicate playing at the Olympics in front of a home crowd all willing and cheering us on. I felt very privileged to be in that position. It really felt emotional.

What has been the highlight of your playing career?

It’s so tough to highlight one moment, but definitely achieving the quadruple with Arsenal and winning the Championship in the US with Sky Blue, because we got to meet President Barack Obama.

We’ve seen high profile cases of racism and sexism in English football recently. What can be done to combat this?

A lot can and still needs to be done to both tackle racism and sexism.

It really will take a collaborative effort between government and football governing bodies.

Education is one part of the puzzle within the football ecosystem.

But, I’m a firm believer of diversifying the industry at all levels to aid progression. As well as a zero tolerance stance towards offenders.

It’s great to see you increasingly as a pundit on Sky Sports News. What do you enjoy about football media and do you think you’ll go into this when you retire from playing?

Thank you! It’s definitely a new area I’m exploring and getting more experience in.

I love the game so much I honestly can talk about it for hours if allowed.

So it’s nice to work in this space where I can express that side of myself and my knowledge of the game.

I’m sure I will continue to work in football media once I retire, but I would also like to coach too.

What message would you give to girls hoping to follow in your footsteps?

My advice to girls who want to become elite footballers is that working hard away from your regular training environment is just as important as your team training.

Technically, physically or mentally, whatever it is, that’s your chance to also gain personal advantages over other players.

Anita will appear at Create The Space: LGBT+ Identity in Women’s Football Friday 19 February at 7pm. Hosted by the National Football Museum and Football V Homophobia, the event is free. Register here 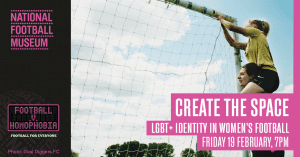