Object of the Week: A Barbie Girl in a Barbie World…Cup? Calendar

This week’s objects are unusual but charming Barbie dolls that were created in collaboration with the FIFA Women’s World Cup 1999. What is particularly fun about these objects is the fact that the icon of femininity that is Barbie is here paired with a sport deemed by the FA in 1921 as “quite unsuitable for females”, an idea which has been difficult to detach from the sport.

Who were the four Barbie dolls that made up the collection?

These four dolls were named ‘Barbie’, ‘Teresa’, ‘Kira’ and ‘Christie’. A very nice addition is the fact that they are all different races; Teresa is Latina, Barbie is white, Kira is East Asian, and Christie is Black. 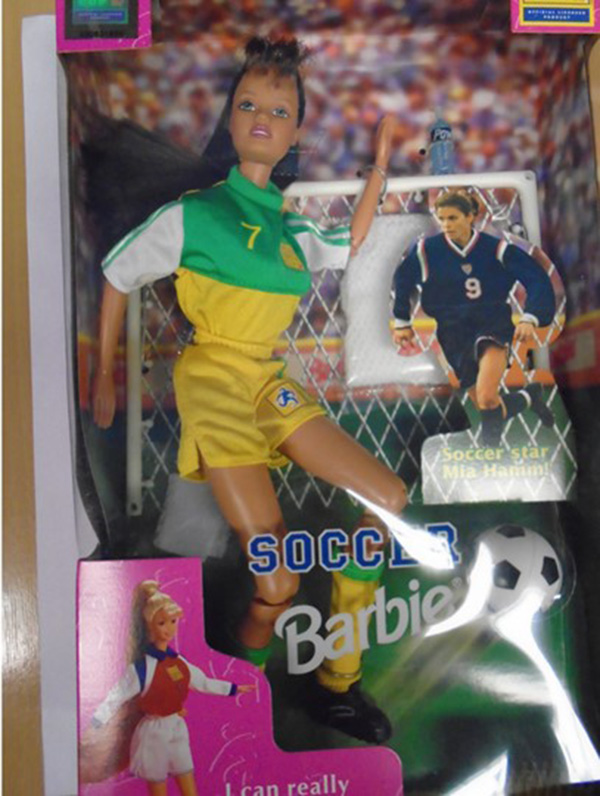 Teresa is in a “team” uniform 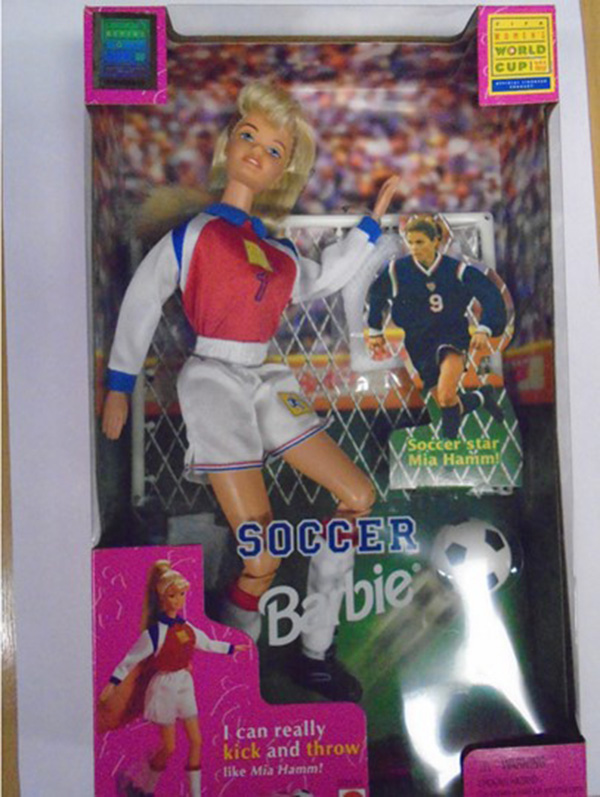 Barbie is in a “goalie” uniform

All of them feature the tagline “I can really kick and throw like Mia Hamm!” on the front. As well as the dolls, each box also contains a football, goal net, water bottle, hair brush, and towel. On the reverse of the box there is a picture of Mia Hamm holding whichever doll it contains. There is also information about Hamm and the 1999 Women’s World Cup. 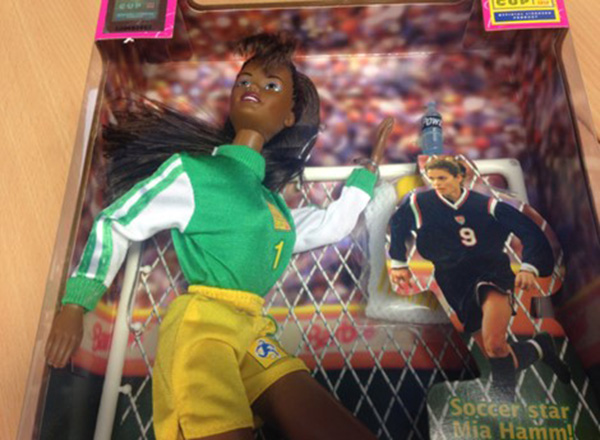 Christie is in a “goalie” uniform 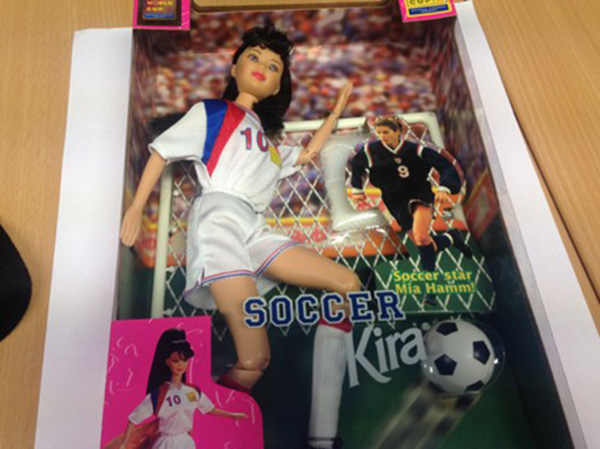 Kira is in a “team” uniform

There’s actually a short television advert for the collection that you can watch on YouTube, and it features Mia Hamm! It starts off with young girls playing football and saying “I can be champion of Women’s World Cup soccer!” Then we see Barbie from the collection kicking a football, and we hear one of the girls say, “I can be a goalie, like soccer Barbie.” Next, Hamm is shown kicking a football, and one of the girls says, “Or a power forward”, before Hamm says, “Like me!” The girls then approach her and say, “It’s Mia Hamm!” and “Mia Hamm!”

In the rest of the advert there is a mixture of clips of the girls playing with the Barbies and the girls actually playing football with Mia Hamm. We also see the girls eating pizza with Hamm, and there is an inspirational song that plays encouraging the girls to, “Be a champion! Be a star! Be anything!”

This advert is a gem that aims to get young girls involved in football, and really does show us how football and femininity combine in a really good way in the form of these Barbies; it is most certainly a suitable match!

Mia Hamm is quite simply a legend of women’s football. She played for the USA from 1987 to 2004, and held the record for most international goals scored by any gender until 2013. Watching videos of her playing, you really can see just how incredible of a player she was, such as her stunning hat-trick in the Nike Victory Tour 1997 game against England.

In 2001 and 2002 she was FIFA World Player of the Year, and was also included in Pelé’s FIFA 100 list, as well as having many other honours and accolades. The now-folded professional league, the Women’s Professional Soccer (WPS), featured a silhouette of her in the logo.

What happened at the Women’s World Cup in 1999?

The 1999 FIFA Women’s World Cup was the third edition of the competition, and was hosted and won by the United States of America. Winning this as well as having won the Olympic Gold Medal in 1997, the team became the first to simultaneously hold these two titles.

The final, between the USA and China, was won by the USA on penalties. Played at the Rose Bowl, it was attended by over 90,000 people, making it one of the most attended women’s sporting events ever, and it was also watched on US broadcast television by an average of 17.9 million viewers and a peak of 40 million. This really was a huge moment for women’s football in the USA.

Why are these Barbie dolls important?

Up until this point, where women’s football had featured in popular culture, it had been to emphasise how women and football do not go together. For example, the picture below is part of the museum’s collections is a promotional still from the Hollywood movie A New Kind of Love (1963) dir. Melville Shavelson. The incongruity of her being dolled up whilst standing in goal is what is intended to create humour. Femininity having no place in the masculine sport of football is an idea that was well ingrained in society even after bans on women’s football were lifted. 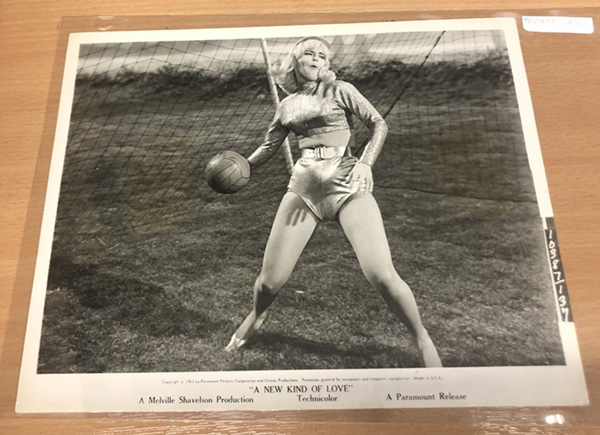 The success of the USA women’s team, and the push for young girls to get involved in football that these Barbie dolls encapsulate, created a space where women and football do go together. Due to this, in the USA, they really did manage to get away from the idea of women being unfit to play football, and instead football became a sport played predominantly by women. Although, this, in turn, has had a negative effect on how seriously football is taken there as a “woman’s sport”. Here across the pond, football is too hyper-masculinised and entrenched into our culture as a man’s sport to ever make a switch like that.

This space where femininity and football go together was expanded into all parts of American culture, such as film and television. From the 90s to now, there have been many American films that celebrate or showcase women playing football — a real switch from the attitudes presented by the 60s American film above. Some examples are: Switching Goals (1999), Dare to Dream: The Story of the U.S. Women’s Soccer Team (2005), She’s The Man (2006), Her Best Move (2007), Gracie (2007), My Dad Is A Soccer Mom (2014), Alex & Me (2018), Back of the Net (2019), and the television series The Kicks.

All in all, these 1999 Women’s World Cup Barbie dolls are unique items that represent a really lovely and positive part of football history.