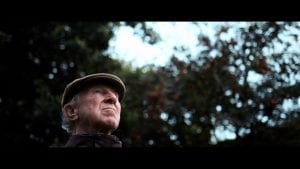 Directed by Gabriel Clarke, the film features revealing, unseen archive footage captured behind the scenes with Jack and the Ireland team during the World Cup in 1990 and on the road to their qualification for the 1994 World Cup in the USA.

It features major figures in football, music, film, politics, and for the first time, Jack’s family.

The film also details Jack’s previously undocumented life with dementia. These scenes are particularly poignant as Jack died in July while it was revealed recently that brother Bobby has dementia.

Jack Charlton entered the National Football Museum’s Hall of Fame in 2005. The museum tells the story of his part in the 1966 World Cup win and has his Leeds United tracksuit in its collections – a club he represented a staggering 762 times.

The National Football Museum’s Dickie Felton spoke to director Gabriel Clarke about the film, and the man revered on both sides of the Irish Sea.

Dickie: People sometimes say football is just 22 players kicking a ball around. But when you watch a film like this it’s much more than that. The film looks at football but also politics and The Troubles. In Jack’s case his football success with Ireland inspired a whole nation…

Gabriel Clarke: That was one of the appeals of the story when I was first thinking about it. The sense that there was something broader. In the documentaries I’ve made I tend to go into areas that develop and have other strands to them. With this film there were a lot of layers there. 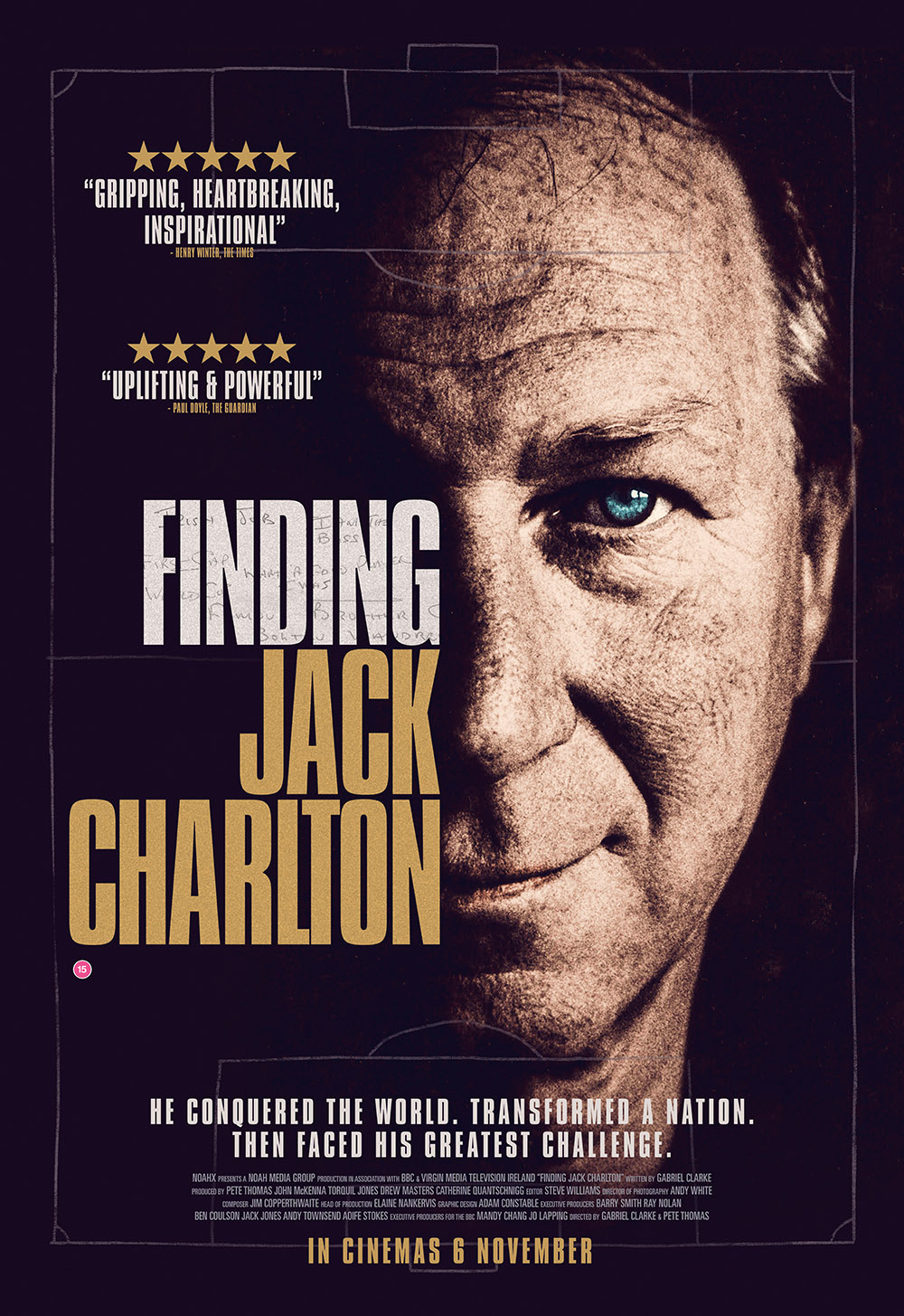 In terms of what he achieved with Ireland, the idea of an Englishman at that time, going to Ireland and 10 years later being given the citizenship of the country is unthinkable. It’s incredible.

I don’t think that story had really been told in film form from a UK perspective. And I think for a lot of Irish people watching, the context of that achievement will hopefully hit home more as time passes. Documentaries have been made around the football story before but none really around the broader impact perspective.

To talk to people like Larry Mullen of U2, Roddy Doyle the author, Brendan O’Carroll the comedian, all these people who in a way, were riding an Irish wave at that time which was related to what Jack and the Irish team were doing on an international scale.

Dickie: How did you get such close access to Jack and his family during what was a sensitive time with Jack living with dementia?

Gabriel Clarke: They were behind the idea of a film about what Jack achieved with Ireland. The family were very much of the opinion that Jack lived with his dementia but it didn’t define him.

Like a lot of people who have dementia, they live with it, they don’t suffer from it. It’s one thing the dementia organisations behind the film – The Alzheimer’s Societies of UK and Ireland – are always keen to emphasise – people live with dementia.

Obviously, what you see is sad and so very poignant. Especially when juxtaposed to a figure like Jack when you see him in his pomp in that Ireland time.

Hopefully by showing Jack trying to do his day to day things, engaging with his grandkids, taking a walk on his beach with his wife, still going to his fishing charity, you are demonstrating the courage that the carer needs and people around the person living with dementia.

I was inspired by filming and working with Jack and the family in a lot of those scenes.

Dickie: The film looks at the relationship between the brothers Jack and Bobby. How important was it to use a clip from Italia 90 with the pair of them sat by the pool with a glass of Guinness each?

Gabriel Clarke: We were struggling to find a moment when the two of them were together after their playing careers.  I’d heard a few tales of Bobby being a pundit at World Cups. I was at a Six Nations game in Dublin in February and spoke to a journalist over there and he said: ‘Yeah we did an interview with them for BBC Northern Ireland just before Ireland played Italy’.

And then we were able to find the clip. It was a big moment for Jack and possibly the only moment on camera were Bobby says how proud he is of Jack to Jack.

Dickie: There is so much sea in the film. The waves. Paul McGrath interviews and Jack and his wife at the beach…

Gabriel Clarke: Paul McGrath lives by the sea on a wonderful part of the east coast of Ireland. So it was a practical thing. But also in terms of visual beauty it offered us great potential.

The pub in which you see Jack is right near the coast and where there are goalposts. So it was its own wonderful set. We had three elements there – the pub, this slightly overgrown football pitch, and the coast itself. We had this triangle of the perfect day’s shoot.

So it was a practical point of view it was one of the reasons why it was done. There was no great visual motif idea behind it. But – a sense of time passing – often it is never done better than with the sea. 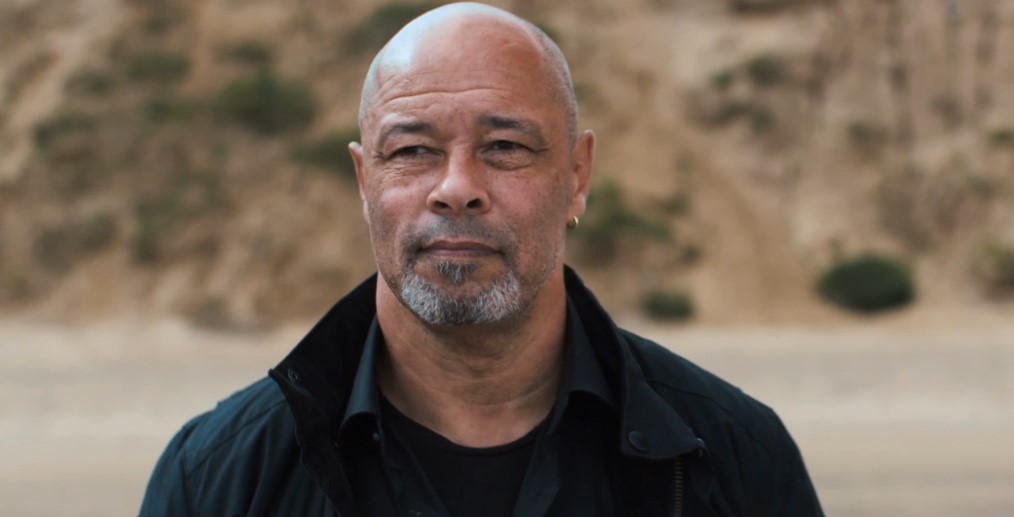 Dickie: The Paul McGrath contributions are emotional. He had a very difficult childhood and Jack Charlton was like a father figure to him. In the film Paul talks about how Jack supported him during really difficult moments…

Gabriel Clarke: Credit to Paul. He’s been through a lot. He’s never been one to discuss too much and he’s getting on with his life wonderfully now.

I don’t think this interview was easy for Paul. But such was his love for Jack he was able to say a lot of things in his interview that maybe he wouldn’t normally say. Like revealing that very personal moment where Jack’s loyalty to him was at its most profound.

Jack constantly stood by Paul.  Paul was the best player Ireland had at that time consistently. Jack knew that if he could look after Paul he’d have a great player. And that there would have to be sacrifices made there.

Father figure almost doesn’t do it justice. Paul didn’t have a father.

I think the relationship they had was much deeper than that.

Finding Jack Charlton is released on Blu-Ray, DVD and digital on 23 November 2020.