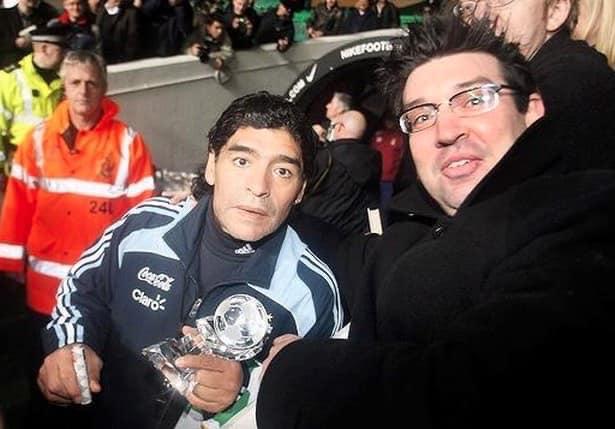 My love affair with Diego Armando Maradona began in 1979. I had heard all about this wonder kid even before I had watched him kick a ball. Luis Cesar Menotti deemed him not good enough to play for Argentina when they host nation won the World Cup in 1978.

Maradona was already making waves for club side Boca Juniors. As luck would have it, the following summer Argentina came to Scotland to play at Hampden Park. It was June 1979; I was six years old. My father got tickets and took me along to Hampden and told me to watch Maradona. I was transfixed

There is a famous video clip of Maradona warming up to Opus III song ‘Live Is Life’ during his pomp for Napoli. He is keeping the ball up almost in time with the music. Maradona was doing all of this at Hampden back in 1979. He could hit the crossbar with the ball at will from 20-30 yards, long before the crossbar challenge was invented. He could play keepie-up with anything. Maradona’s party piece that day was something to behold. He floated the most audacious chip which travelled the length of the Hampden field and bounced right in front of the marching pipe band. The SFA believed a pipe band belting out tunes such as ‘Amazing Grace’ passed as entertainment at Scotland internationals, it was the 1970s after all.

Maradona was amazing, tore the Scots to pieces and netted his first ever international goal for Argentina when he tricked Scotland goalkeeper George Woods with a dummy and planted a lovely shot into his near post. It was a brilliant piece of skill in a virtuoso display that saw Argentina run out 3-1 winners. Not only was a star born that day in my mind Maradona was a football legend. I had never seen anything like it.

Fast forward to the World Cup in 1986. Maradona and Argentina were looking every inch the winners from early on. Cue a last eight tie against England. Then the mood of the tournament changed, sadly this was where politics and sport began to mix. The lines became fuzzy, all of a sudden we were set for a re-enactment of the Falklands War. This was the two nations first match up against each other on a football field since the war. The lead up to the clash was ugly to say the least.

It is fair to say that revenge was very much on Argentina’s mind in this match. As a Scotsman and Maradona fanatic, I am not ashamed to say I was supporting Argentina. The two goals scored by the blue-shirted Maradona are the two most famous goals ever at any World Cup finals. The first goal was handball, as Maradona said himself: ‘He acted like a thief, he picked the English pockets’. Calling it the ‘Hand of God’ goal only served to add total insult to England’s injury. The second goal is not up for question, that was a thing of beauty. If football can be expressed as a work of art then this is it splashed on a canvas. Watching the blue shirted Diego slaloming his way past English players like an Olympic skier before sliding the perfect goal past Peter Shilton into the net was a joyous moment.

El Diego had done a number on the Auld Enemy. He was an honorary Scotsman. 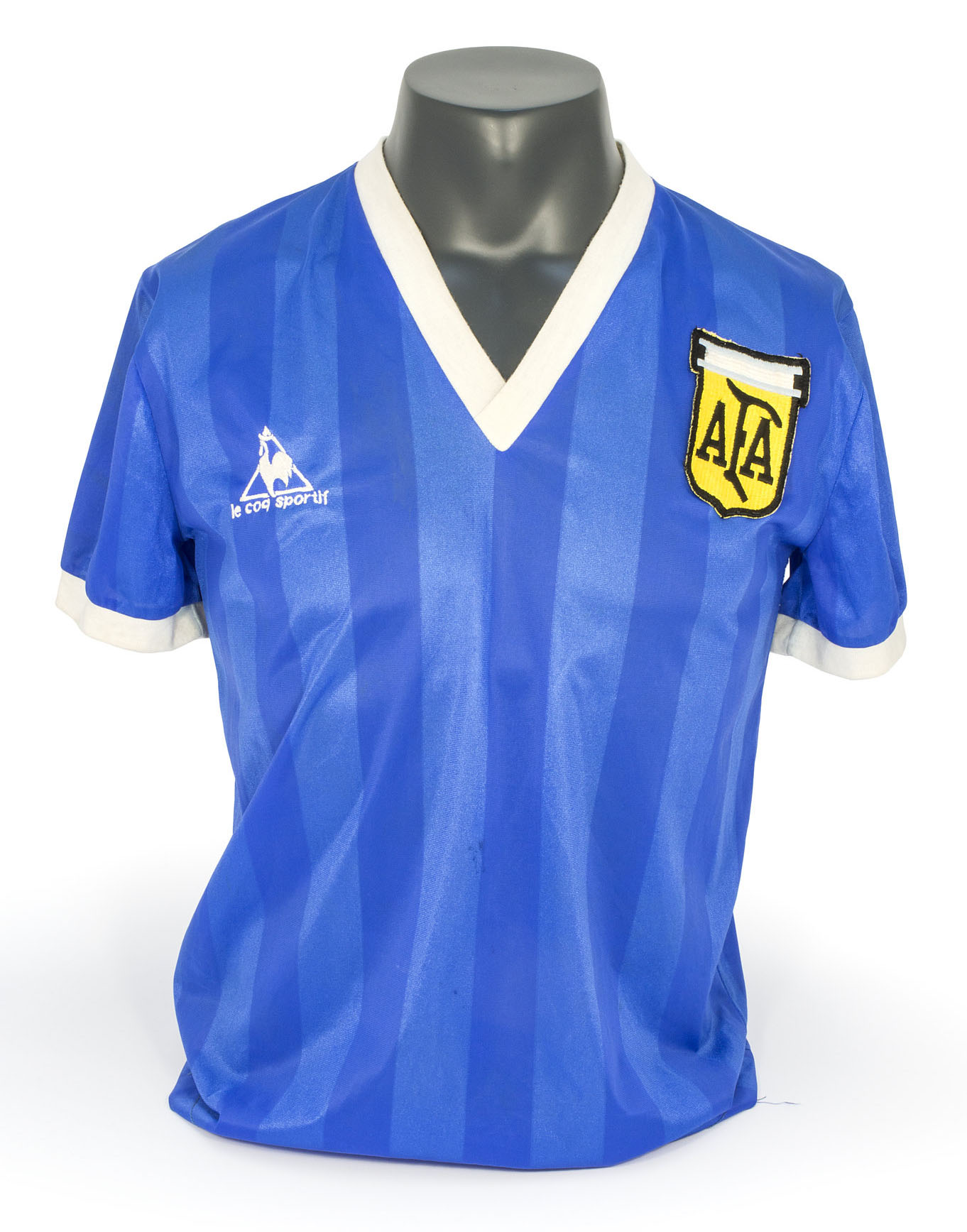 The shirt worn by Diego Maradona during Argentina’s 2-1 win over England in the 1986 World Cup quarter-final, on display courtesy of Steve Hodge.

He was my Diego. I loved him unconditionally by then. Every time I see that blue shirt (on display at the National Football Museum) I picture both goals in my head. Ridiculous to the sublime. Then in 2008 something inexplicable happened. Maradona and Argentina visited Scotland again. This was Maradona’s first outing as his national team manager.

Argentina won 1-0 courtesy of a Maxi Rodriguez goal. By now I was a working sports journalist for the Daily Record newspaper in Glasgow. Surely I couldn’t get to meet my football idol – could I? Somehow the dream became a reality. I was given a glass trophy with a hand cupping a ball with the inscription: ‘To Maradona, on behalf of the people of Scotland, for scoring the ‘Hand of God’ goal against England in 1986. Thank You!’ I was given a simple instruction.

Argentina were training at Celtic Park – the night before the match – I was told to take the trophy get a picture of El Diego holding it. No chance, you couldn’t get near him. Security was frightening. In fact, the only time Maradona was alone was when he was out on the Celtic Park turf instructing his team.

I positioned myself at the mouth of the tunnel. The session ended and the legend made his way towards the dressing room. It was now or never. ‘Diego, Diego, Diego, a gift from the people of Scotland!’, I screamed at him. He walked by but suddenly turned back. I held out my hand bearing the glass trophy. He ambled towards me. ‘For Me’? “Yes Diego, this is for you from the people of Escocia for dos goals against Angleterre’. He nodded, laughed and smiled. I then proceeded to say, ‘Azure blue’ and holding my coat alluding to that there 1986 Argentina jersey that he had worn when he scored the double against the Three Lions. Again, he nodded in agreement. Maradona took the trophy. ‘Gracias senor’.

Every football fan has their own memories and favourite Maradona goal or story. For a spell in the 1980s Maradona was the most famous footballer in the world. He is arguably the greatest footballer of all time. I prefer to remember the Maradona who wore that iconic blue shirt and scored the goal of the century. Argentine commentator Victor Hugo Morales nailed it completely when he famously said: “Diego Armando Maradona, thank you God, thank you for football, for Maradona, for these tears”.

To the diminutive powerhouse who wore that iconic blue jersey and who scored those two unforgettable goals in 1986 and went on to conquer the world as well as hold that famous gold trophy in his hand: ‘Gracias senor’.