This week, Alexandra Heaton looks at a programme from a game never played due to the pandemic: the fixture between promotion-chasing Barrow AFC and Wrexham AFC.

On the same day it was announced that the Merseyside derby was to be postponed due to coronavirus, there came an announcement from Wrexham AFC. A member of the Wrexham AFC first-team squad had been advised to self-isolate due to symptoms of the virus. Subsequently, their National League fixture against Barrow was postponed: a saddening blow for fans.

This was especially felt for Barrow AFC supporters, as at the end of the 2019/2020 season the club was promoted from the National League to the Football League, following a vote by National League clubs to end the season on a points per game basis. Barrow were four points clear prior to lockdown and the suspensions of the season. In 1972 (48 years earlier) the club had lost its place in the league as despite being third from the bottom of Division Four, at the time the bottom four teams had to apply for re-election. This meant the promotion was important to both the club and its fans. 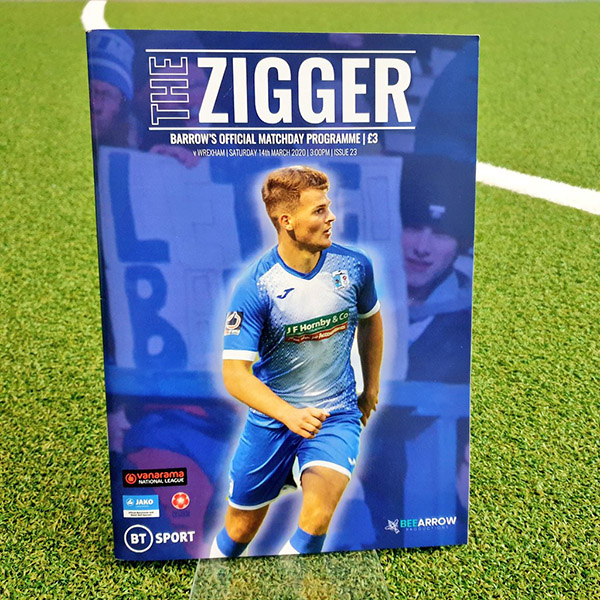 Despite the outbreak, the National League allowed the weekend’s scheduled fixtures in its three divisions to go ahead as planned.

This programme evidences the fact that lower league games were also affected by the pandemic. This is an item that can be studied and discussed by future generations, on the implications and effects of the pandemic.

It is important for us to collect these items, as they give an impression of our current social and economic climate. We are currently living through an unprecedented event in history, and these programmes gathered from postponed and BCD games echo our current situation, of empty stadiums and cancelled matches.

While the Barrow programme is not currently on display at the National Football Museum, we are planning to add Barrow’s story to the display this year to reflect lower league clubs and their experience of the pandemic last year.