This week marked the 75th anniversary of the Burnden Park disaster. We look at an object from our collections connected to the ill-fated match. 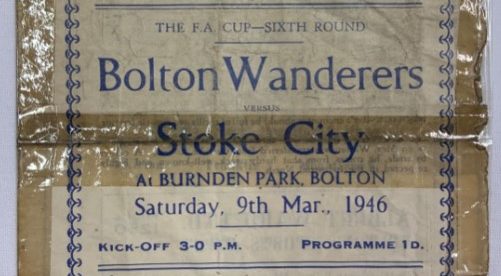 This is a programme from the Bolton Wanderers V Stoke City FA Cup tie at Burnden Park played on Saturday 9 March 1946.

It is a programme from one of the darkest days in British football. Tragically 33 Bolton supporters would lose their lives in a crush on the terraces as the match approached kick-off. The incident was to be the first major disaster at an English sports ground.

There was great expectation for this match and the visit of Stoke who featured Stanley Matthews. A big crowd was expected but it’s estimated that over 85,000 spectators attended – which was 15,000 over capacity. A sudden swell of people caused the terrace barriers to collapse which resulted in the crowd surging forward and crushing to death 33 fans with 400 more injured.

This was an era when the country was trying to get back to normal having been at war. Football resumed at Burnden Park at the turn of 1946. There was great enthusiasm for people to go to football and enjoy themselves once again after the end of Second World War. Crowds flocked back to grounds in massive numbers. However, many British grounds were unsuited to accommodate such large crowds.

What was the legacy of the disaster?

The disaster led to the Moelwyn Hughes report which recommended more rigorous control of crowd sizes at football grounds. Tragically British football was to be affected by subsequent tragedies at Ibrox 1971, Bradford 1985, and Hillsborough 1989.

How is the disaster remembered?

Bolton played Cambridge this week on the 75th anniversary. A special flag provided by the Bolton Wanderers Remembrance Group was displayed in the stands and a video broadcast as club chaplain Phil Mason retold how the day unfolded. The names of the 33 being read out by manager Ian Evatt.

Is the programme from the disaster on display?

Not at the moment. It is a very delicate item. There is however a model of Burnden Park at the museum in a section which looks at stadium safety. 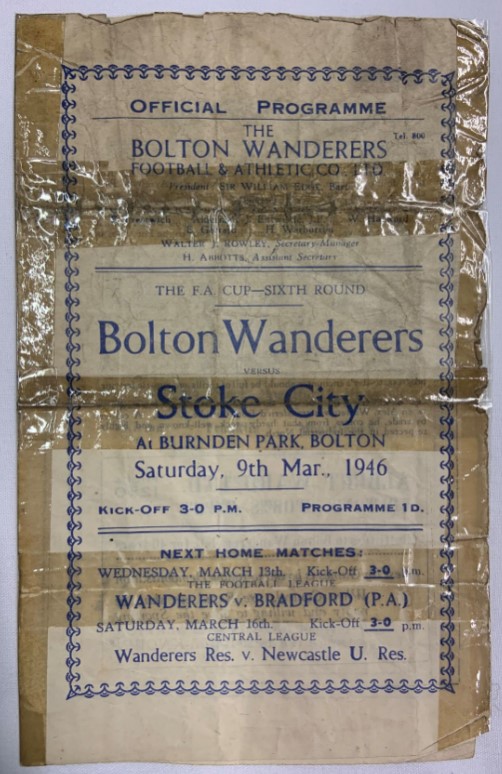