This is a match programme from a Merseyside derby which didn’t go ahead as the coronavirus pandemic took a grip on football. Alexandra Heaton takes a look at the significance of this object. 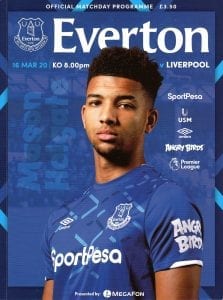 This is the match programme from last season’s Merseyside derby at Goodison Park. The match was set to take place on 16 March but ahead of the game Everton announced that Carol Ancelotti’s players and the coaching staff would be taking measures to reduce the risk of coronavirus spread after an unnamed member of their team appeared to show symptoms. The match was subsequently postponed. On 13 March 2020 the Premier League announced a suspension of all matches and the campaign would not resume until late June 2020.

This programme is from a match which didn’t take place on the stated date because of the pandemic and marks an unprecedented period in football history. It was also at a time that Liverpool were trying to win their first league title in 30 years.

What happened in the match?

When the game was eventually played on 21 June 2020 it was a nil-nil draw. Liverpool secured the Premier League title days later when Chelsea beat Manchester City 2-1 meaning that the league title was on its way to Anfield.

This programme holds significant importance in the collection, as it is a reflection of contemporary football and its response to the pandemic. By saving these objects and stories, we are creating an interesting and informative learning environment for future generations.

Does the museum have anything else from this match?

The boots worn by Liverpool and England ace Trent Alexander-Arnold from the rearranged match are on display. A fan won an online competition for the boots and donated them to the museum. They carry the Black Lives Matter message and were worn by the right-back in this derby game.

Find out more about the objects we’ve added to our collection during the pandemic in our First 11 video: