Object of the Week: Sir Tom Finney’s Footballer of the Year Award 1954 Calendar

One of English football’s all time greats, Sir Tom Finney played his entire career with Preston North End as a brilliant and versatile forward. He also won 76 caps for England, scoring 30 times. Alexandra Heaton, at the museum on work experience, takes a closer look at one of Finney’s individual honours… 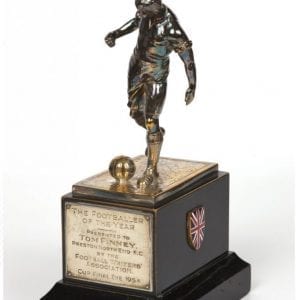 This is the Footballer of the Year award presented to Tom Finney by the Football Writers’ Association in 1954. In 1957 Finney won the award again, becoming the first player to receive this honour twice.

Who was Sir Tom Finney?

Tom Finney hailed from Preston, Lancashire. His career began after he saw an advertisement in a local newspaper placed by Preston North End for junior players aged 14-18. Following an excellent trial match he was immediately offered a contract. His father insisted that he complete his plumbing apprenticeship before signing.

Finney joined the team as an amateur, training in the evenings after work and was permitted to play for the club’s junior teams. He had not yet made an appearance when the Second World War brought football to a halt and Finney was called up to serve in the Royal Armoured Corps.

Tell us about his career at Preston

By the time normal competition was restored, Finney was 24 and made his first appearance for Preston. Just 28 days later he made his debut for England against Northern Ireland and  scored a goal in the 7-2 victory. Finney’s international career spanned 13 years, he won 76 caps and scored 30 goals. Finney played professionally from 1946 when he left the army, until his retirement in 1960, and made over 400 appearances for Preston. 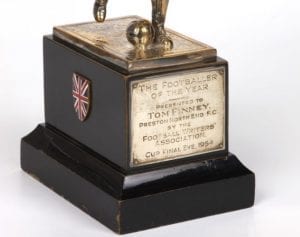 How great a player was he?

Nicknamed ‘The Preston Plumber’ he was widely regarded to have been one of the sport’s greatest-ever players, a topic which created nationwide debate at the time, as some people credited this to Blackpool’s Stanley Matthews.

A versatile attacker, Finney could play in any forward position, and his speed, movement and ability to leave defenders baffled. Not only was he an excellent goal scorer, he also excelled at creating goals for others. 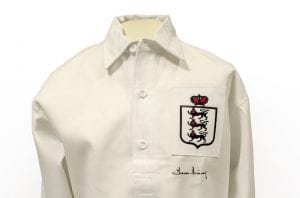 What did Finney do after his football career?

After retiring in 1960 due to a persistent groin injury, Finney dedicated his life to helping the people of Preston, working for local hospitals and charities. Awarded OBE, CBE and a Knighthood, he was also inducted into the National Football Museum Hall of Fame in 2002 (one of its inaugural inductees).   Finney died aged 91 in 2014.

Can visitors see Finney’s Player of the Year award?

Yes – it is on display at the museum. Visitors can see this object when we re-open from Thursday 27 May 2021.