This week’s Object of the Week is a portrait of Hope Powell by Manchester artist Stanley Chow. Tilly Johnson explores the career of one of English football’s most important figures. 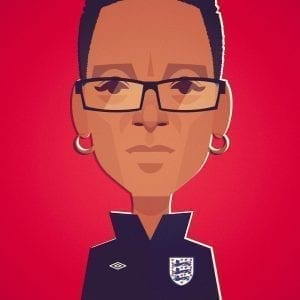 It’s more an artwork than an object.

The museum commissioned this portrait of Hope Powell to display alongside other England managers such as Sir Alf Ramsey, Sir Bobby Robson & Sir Walter Winterbottom in the museum’s England on the World Stage section.

Tell us about Hope Powell’s career

Hope Powell had a glittering domestic and international career. She also became the first female and youngest England Women’s manager.

She began playing for Millwall aged just 11, after she was banned from playing for her school’s boys’ football team. She is record goalscorer for Millwall Lionesses, where she played for nine years.

In her club career, Powell played in four FA Cup Finals and captained Croydon to a league and cup double in 1996.

What about her international career?

She was the first female and youngest coach of the England Women’s Team in June 1998. She started her coaching qualifications aged just 19 and became the first woman to receive a full UEFA Pro Licence in 2003.

Ahead of accepting the position as England manager, Powell came out as gay. This decision gave her the freedom to truly express her identity before such a poignant moment in her career.

What was her wider impact on the women’s game?

Powell took charge of her country for 15 years, at a time of huge change for the women’s game.

Over 15 years in charge of the England side, she led them to two World Cup tournaments and four European Championships, including a run to the final in 2009.

Her final tournament in charge was to be the 2013 European Championships, when a group-stage elimination after a strong qualification campaign fell below the standards Powell herself had set.

Under her stewardship, women’s football in England had taken giant leaps in profile, professionalism and scrutiny.

Hope was awarded an OBE in 2002 and a CBE in recognition to her contribution. She was inducted into the National Football Museum Hall of Fame in 2003.

In 2016 The Football Association awarded Powell the Outstanding Contribution to Women’s Football award.

What does Hope Powell do now?

She is manager of Brighton Women’s Team and continues to support LGBTQ+ football initiatives.