Object of the Week: Saint & Greavsie board game Calendar

After his sad passing at the age of 81, we remember the life and career of Chelsea, Tottenham Hotspur and England’s prolific forward, Jimmy Greaves. 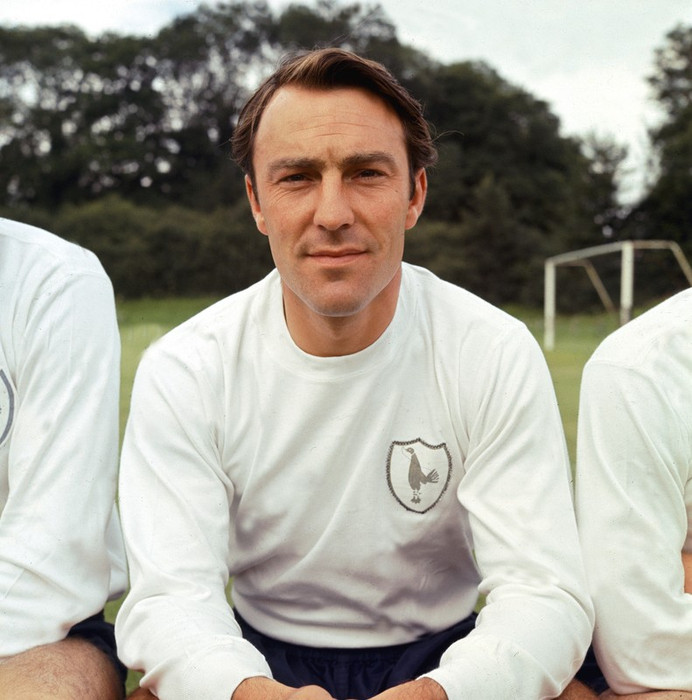 Who was Jimmy Greaves?

James ‘Jimmy’ Greaves was born in East London in 1940, and would grow up to become one of the most prolific forwards ever to grace the English game. Spotted at a young age by Chelsea, he rifled in well over 100 goals for their youth team in 1956-57, and continued in a similar vein when he turned professional at the end of the season.

Jimmy’s remarkable strike rate for the Blues saw him rack up 132 goals in just four seasons. In need of funds, Chelsea sold their star striker to AC Milan in 1961, but Greaves returned to London before the year was out, joining Spurs for £99,999.

He went on to become a legend at White Hart Lane, firing the side to FA Cup glory in 1962 (scoring the first in a 3-1 win over Burnley) and starting the 1967 win over former side Chelsea. He helped himself to a brace in a 5-1 drubbing of Atletico Madrid in the 1963 European Cup Winners’ Cup Final, helping Spurs become the first British team to lift European silverware. 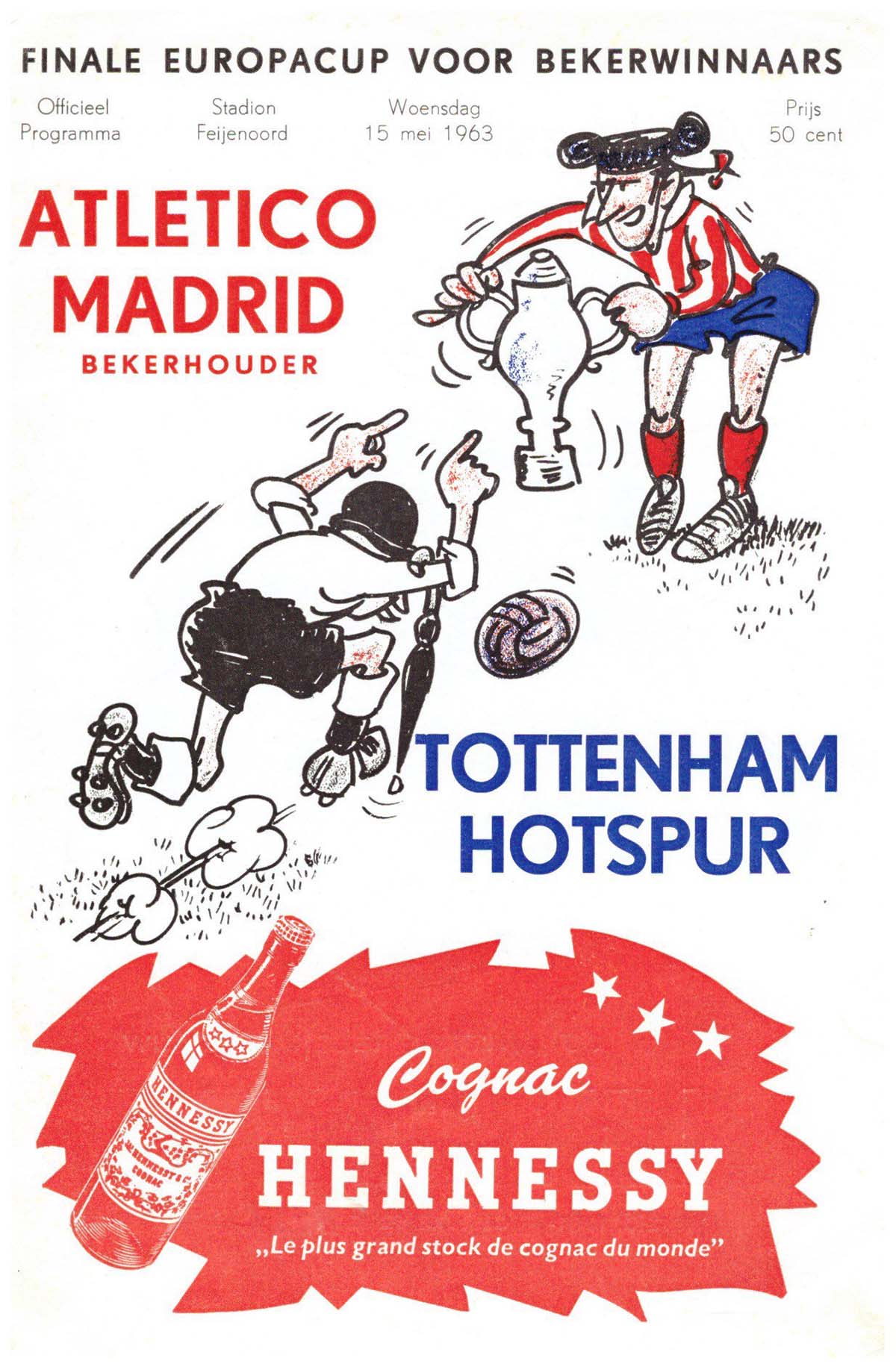 What kind of player was he?

Greaves was the epitome of a fox in the box: a clinical and decisive finisher with a devastating turn of pace. A fine dribbler, Greaves was capable of running at defences and goalkeepers alike, and his positional sense accounted for many of his 268 goals in Tottenham colours. During his heyday, nobody moved quite like Greaves, ghosting into open spaces between defenders.

Starting his career during the days of the powerful, aerially imposing centre-forward, Greaves instead relied on guile, an astute reading of the game and a full repertoire of finishes, from belting volleys and instinctive shots to calm strokes and delicate chips. An instinctive forward, Greaves often said that he knew where to put the ball and how to get it there, and didn’t have to overthink it.

Though occasionally criticised for his lack of work rate – with some former teammates going as far as to brand him lazy off the ball – Greaves came alive with the ball at his feet or in his general vicinity. The fact that he remains the highest goalscorer in English top flight history with 357 strikes to his name, fifty years since his retirement as a player, is testament to his exceptional natural talent. 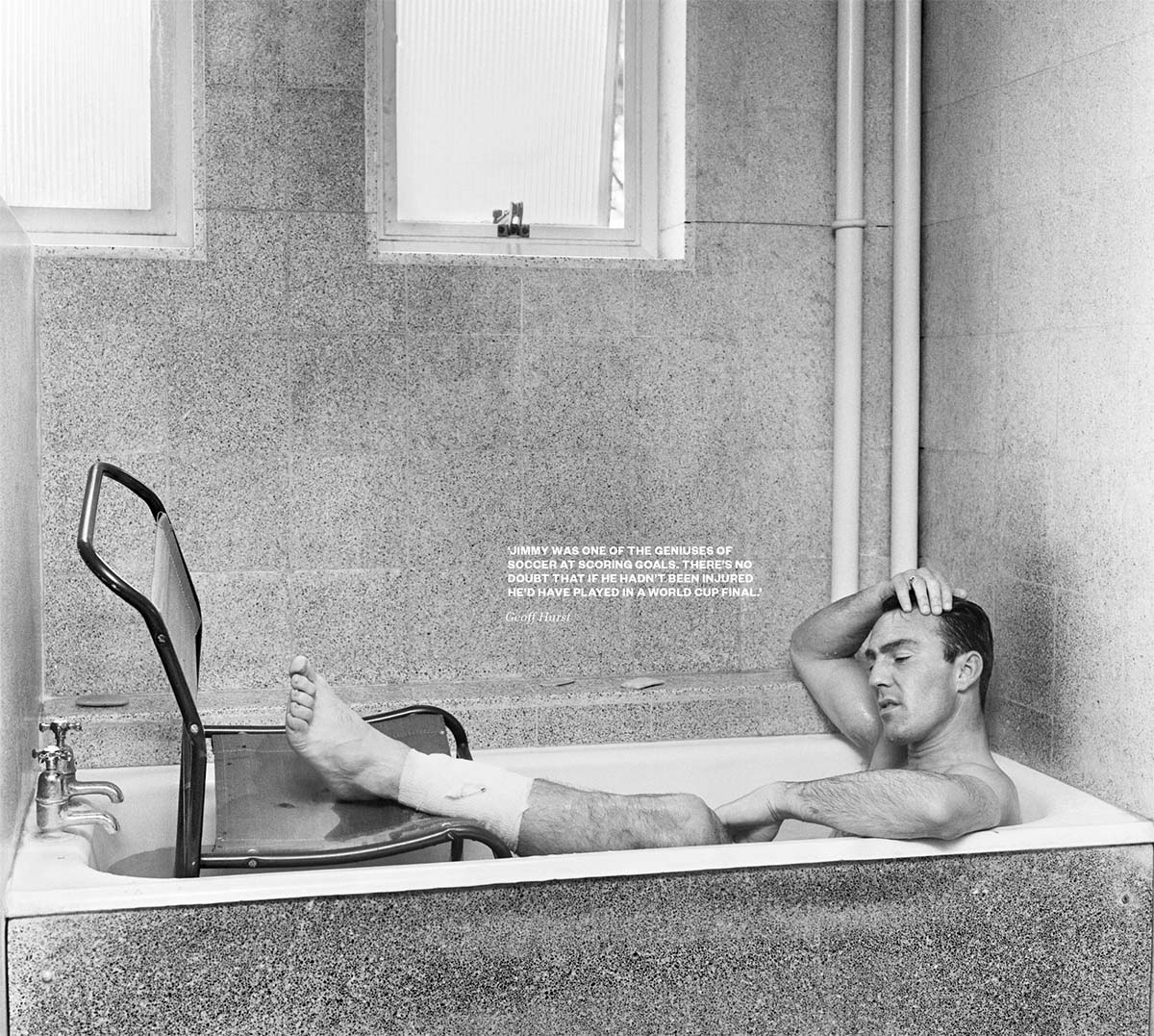 A panel featuring an injured Jimmy Greaves, part of our 1966 World Cup exhibition from 2016.

How did he fare for England?

A 19-year-old Greaves earned his first caps during the unsuccessful 1959 tour of South America. He soon established himself as one of the first names on the teamsheet, starting every one of England’s games in the 1962 World Cup. Prior to the 1966 tournament, Greaves had found the net 43 times and was the Three Lions’ record goalscorer.

At the tournament itself, Greaves featured three times without scoring. In the last of those appearances, a poor challenge from a French defender caused a nasty injury to Jimmy’s shin, ruling him out of the Argentina game. Geoff Hurst deputised in his stead, scoring the winner in a close encounter, and would retain his starting spot right up to the final. Despite mounting press and public pressure, Greaves was not selected for the Wembley showpiece; his replacement scored the only hat-trick in World Cup history to date.

Greaves pulled on an England shirt three more times thereafter; his total of 44 goals was surpassed by Sir Bobby Charlton in 1968. However, he remains the only England player to have scored six hat-tricks for his country. 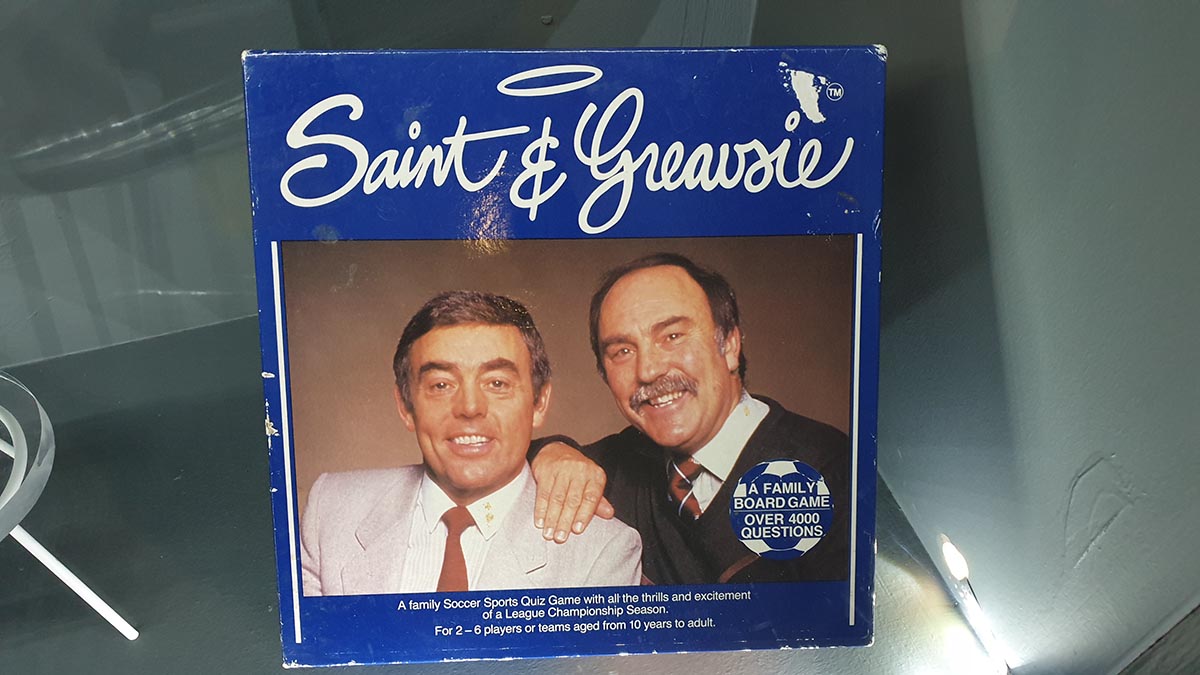 What did he do after football?

Greaves struggled for motivation after joining West Ham United in 1970. He battled alcoholism for the latter part of his journeyman career, but was sober by the time he finally hung up his boots in 1980. Working in print and television media thereafter, Greaves struck up a rapport with former Liverpool forward Ian St John whilst working together in On The Ball. ITV executives capitalised on their chemistry by commissioning a dedicated show, Saint and Greavsie, in 1985.

A hit with viewers, Saint and Greavsie entertained football fans for seven years, ending in 1992 when ITV lost the broadcast rights to Football League games.

Such was their popularity in the eighties that a branded board game was produced, fittingly titled ‘Saint & Greavsie’. Pitched as a ‘family board game’, participants would have to answer twenty-two questions apiece in order to progress around a square board.

A port of the board game was even made available on video game consoles. If you owned an Amiga, Sinclair Spectrum, Amstrad, Commodore or PC, you could play the board game without the need for a board! 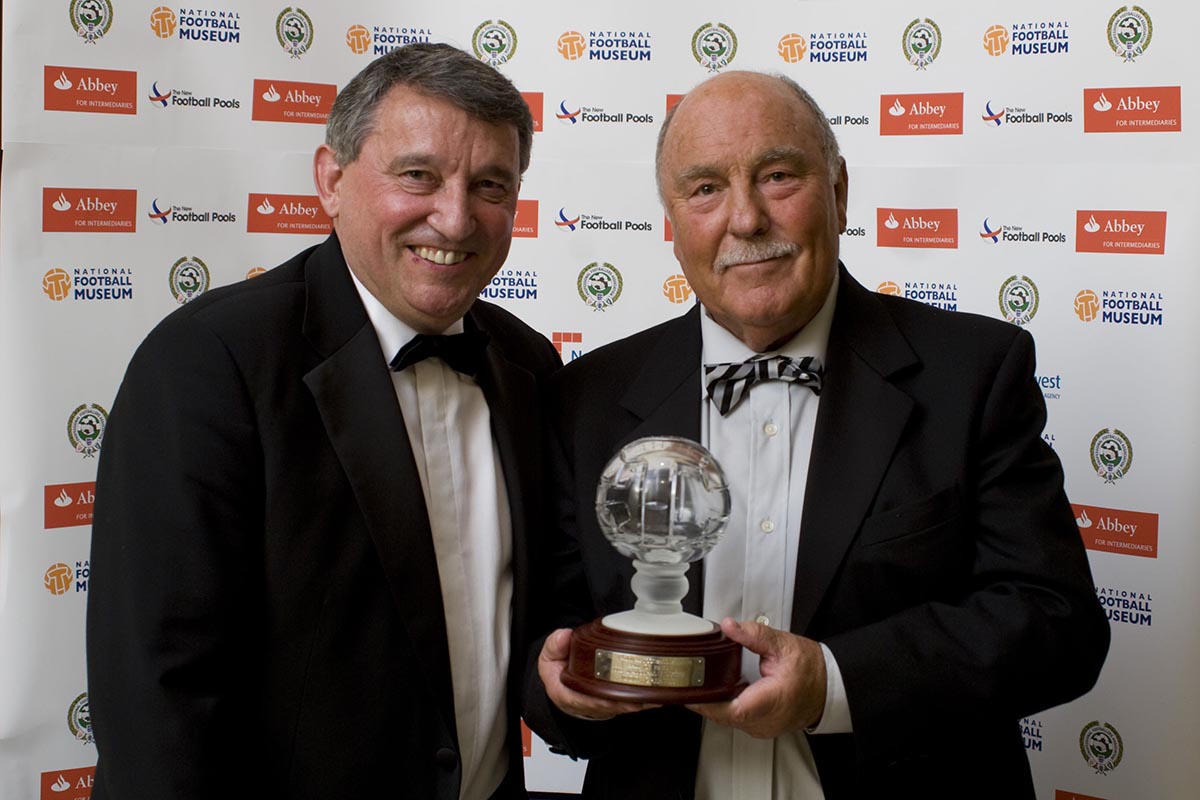 What is Jimmy Greaves’ legacy?

Jimmy Greaves will go down in history as one of the finest goalscorers this country has ever produced. A prolific finisher at the highest level for over a decade, it is expected that his record-breaking exploits in English football will stand the test of time. Off the pitch, he will be remembered as a warm, larger-than-life character; a familiar figure in the homes of millions on a Saturday lunchtime.

We were proud to include Jimmy as one of our inaugural Hall of Fame inductees in 2002; he collected his award in person in 2008. The centre-forward is one of the fifty players represented in our dedicated Hall of Fame exhibition, on display in the Score Gallery until 2022. 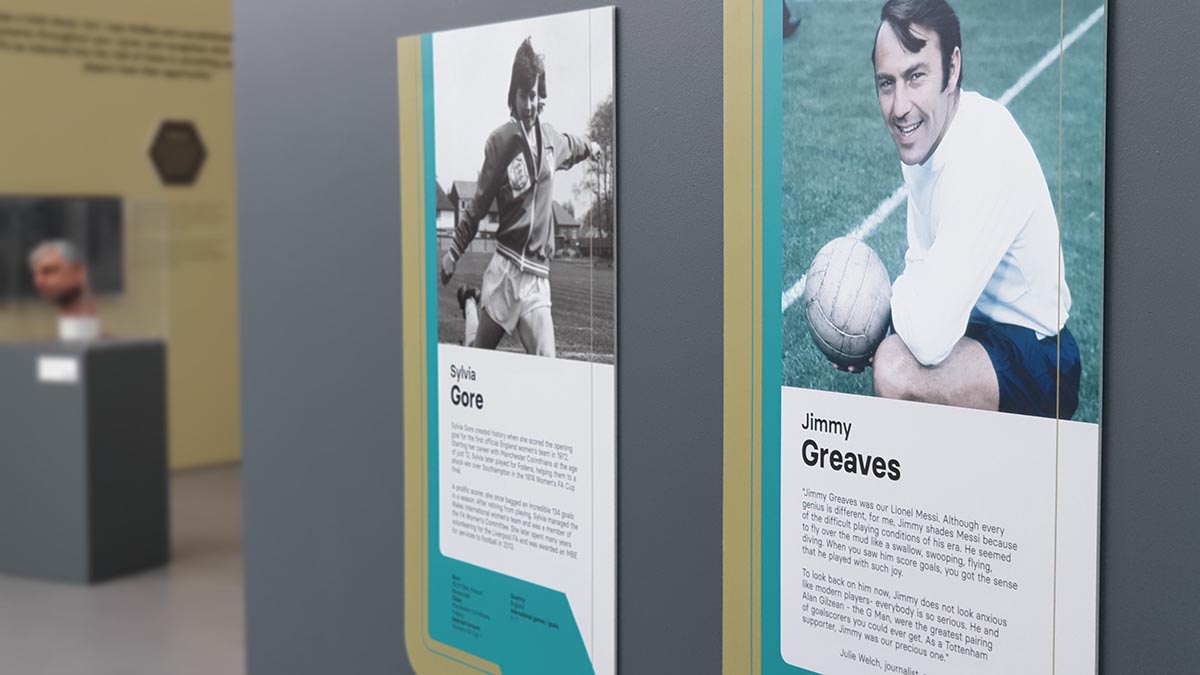