As the Women’s Super League (WSL) celebrates its 10th anniversary on 12 April 2021, Alexandra Heaton looks at a shirt worn by a legend of the game.

This is a Manchester City shirt worn by goalkeeper Karen Bardsley in a title decider against Chelsea in September 2016. City beat Chelsea 2-0 which resulted in them lifting their very first WSL title. City had a stunning season and went unbeaten in the campaign. 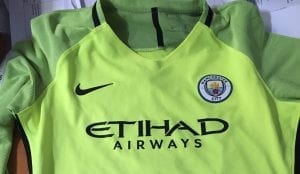 Tell us about Karen Bardsley

Karen Bardsley is an American-born English footballer who has had a glittering career in the domestic and international game.

She began playing football aged five starring for her school team. Her professional career began at Ajax America Women, before she moved to Pali Blues in 2008. She went on to play for Sky Blue FC, Swedish club Linköpings FC, and Lincoln Ladies.

In 2013 she moved to Manchester City where she has won every domestic honour in the game. Bardsley made her 100th City appearance in a Continental Cup match against Liverpool in November 2020. Now 36, she is currently on loan at OL Reign, an American team based in Washington.

What about her international career?

Karen Bardsley was born in the United States as a dual citizen, as her parents are English.

The shot-stopper has been a regular between the sticks on the international stage. She made her England debut in 2005 and has been part of three World Cup squads in 2011, 2015 and 2019.

The keeper helped the Lionesses to a runners-up spot at Euro 2009 and put in two player-of-the-match performances – being named in FIFA’s post-tournament All-Star team – as England won bronze in Canada in 2015. Bardsley also picked up five caps for Team GB at the 2012 London Olympics.

Karen Bardsley and Gemma Bonner at the museum in March 2020 donating items from their careers.

What other key WSL objects does the museum have?

We have a Chelsea v Arsenal programme from the opening weekend of the WSL in April 2011, shirts from key players and ‘Manchester Bee’ boots worn by Gemma Bonner in the Manchester derby in 2019 which was played in front of  a bumper crowd of 31213.

Is the museum going to collect more objects from the women’s game?

Yes. We are currently in the process of trying to gather more items about the 10th anniversary of the WSL for the collection. This summer (end of July 2021) we will open a new gallery to legend of the game Lily Parr and will have a wider women’s football exhibition in 2022. We have a pledge to increase representation of women’s football throughout the museum to 50%.