Curator of Women’s Football Belinda Scarlett takes a closer look at the statue of the late, great Lily Parr…

Is this really the first statue to a woman footballer?

Yes! There are statues of male players scattered throughout the country, many outside stadiums and celebrate legends that have had an impact on their club, but women’s football hasn’t yet had the same level of public recognition. The museum hopes to change that.

Why did it take so long?

There are very few statues celebrating women and women’s achievements generally. Manchester has bucked the trend in the last few years by unveiling a statue of Emmeline Pankhurst in 2018 and now the Lily Parr statue at the museum. Unfortunately, it has taken a long time and a lot of campaigning for many to realise that women’s history needs to be visible. Public commemoration is part of that. 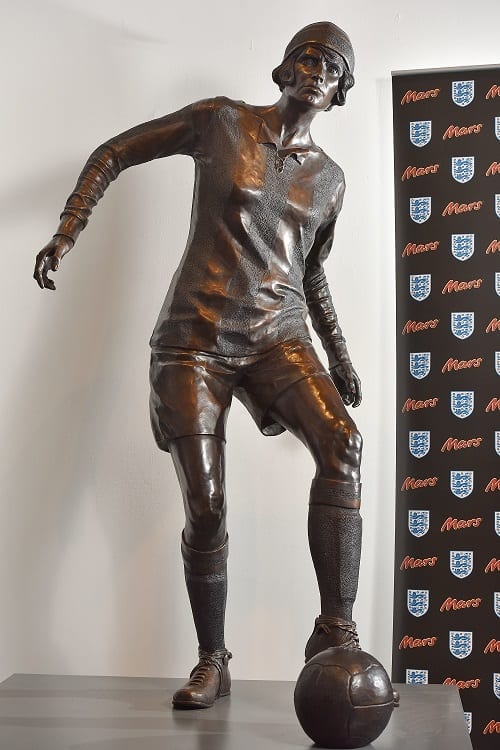 Last year was amazing for women’s football with millions watching the FIFA Women’s World Cup. The museum ran a series of fantastic activities and events throughout summer to celebrate the tournament and inform committed fans and those new to the women’s game about the long history of England’s role in international competition.

The Museum heard that Mars had been commissioned by the Football Association to produce a statue of Lily Parr to commemorate her achievements and were looking for a permanent home for the statue. The National Football Museum is the perfect place for it. The statue was created by sculptor, Hannah Stewart.

Why did the museum do this?

Lily Parr’s story is fascinating and just one of the many stories of individual heroism in the history of the women’s game. The museum has made a pledge to increase our representation of women’s involvement in football across our galleries and having Lily’s statue on display seemed like a fantastic way to do this. Lily Parr was inducted into the our Hall of Fame in 2002 and the statue is a great way to celebrate one of our inaugural inductees.

What reaction do you get from visitors to the statue?

We have had a very positive reaction from visitors, particularly from young women and girls who play or support women’s football. Some are surprised to see the statue and don’t know who Lily Parr is, but once her story has been told they are usually hooked and appreciate why it’s important to be on display.

Yes. We are very excited to have a permanent gallery space dedicated to telling Lily Parr’s story in the museum on the Pitch Gallery. The new gallery has been made possible thanks to a £55,440 grant from the Association of Independent Museums (AIM) Biffa Award, which gives grants to museums and heritage organisations to help tell the stories of lesser-known historical figures through its History Makers Scheme.

The new interpretation explores Parr’s career and influence and opened early in 2021 to coincide with the Football Association ban on women’s football exactly a century ago. Parr and many other women, defied authority and continued to play, helping the women’s game to survive.

Lily also features in our First 11 series as one of the eleven pioneers of the game. Check it out below, and watch the full line-up of videos on YouTube: