On 6 February 1958 Manchester United met with disaster when their plane crashed at Munich.

Museum Futures trainee Tilly Johnson looks at this poignant object relating to the tragedy of the Busby Babes. 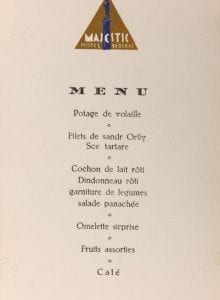 This is a dinner menu card from the Hotel Majestic in Belgrade. It is signed on the reverse by the Manchester United team who were in the city to play Red Star Belgrade.

Eight of the players who signed this card lost their lives after their plane crashed at Munich the following day. This was the darkest day in the history of the club.

It is signed by the famous Busby Babes including Duncan Edwards – an England international and one of the finest players of his generation.

It is both poignant and heartbreaking because the following day this team would be decimated in the  plane crash. This menu marks one of the final times the team were together. 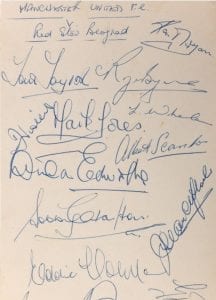 The Manchester United team were staying at Hotel Majestic for the quarter-final of the European Cup against Red Star Belgrade. They drew the game 3-3 which was enough to take them through to the semi-finals of the competition.

On their return journey their plane refuelled in Munich, Germany. The BEA (British European Airways) plane had to take-off from Munich in wintery conditions. The third attempt proved fatal. The plane failed to gain height and crashed into the fence surrounding the airport and a house.

Who were among the casualties? 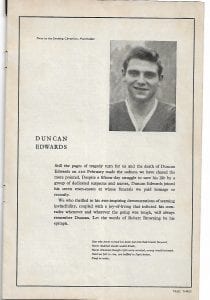 How is the disaster remembered in the museum?

The museum has a display which tells the story of the Busby Babes and the disaster. You can see the menu along with other items including a brass tray found on the runway in the debris. The tray was part of a coffee set given to every United player by Red Star. It is engraved with ‘FK CREVENA VEZDA BEOGRAD 5.II.1958’.

How did United ever recover from Munich?

The Munich Air Disaster is an indelible part of United’s history.

Amazingly, the club made it to the 1958 FA Cup final – just three months after the disaster. Crash survivor and hero of Munich Harry Gregg played in goal at Wembley alongside three other players who escaped the carnage. 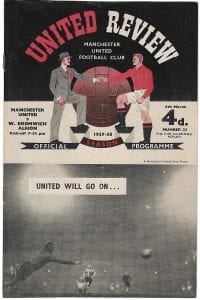