In the late 1950s the Reds were a second tier team with a crumbling Kop. Shankly put Sir Roger at the centre of his Reds’ rebuild. A team which would enjoy domestic success and join the cream of Europe.

Roger was inducted into our Hall of Fame in 2006. This week everyone was saddened to learn that the Liverpool and England hotshot had died at the age of 83. 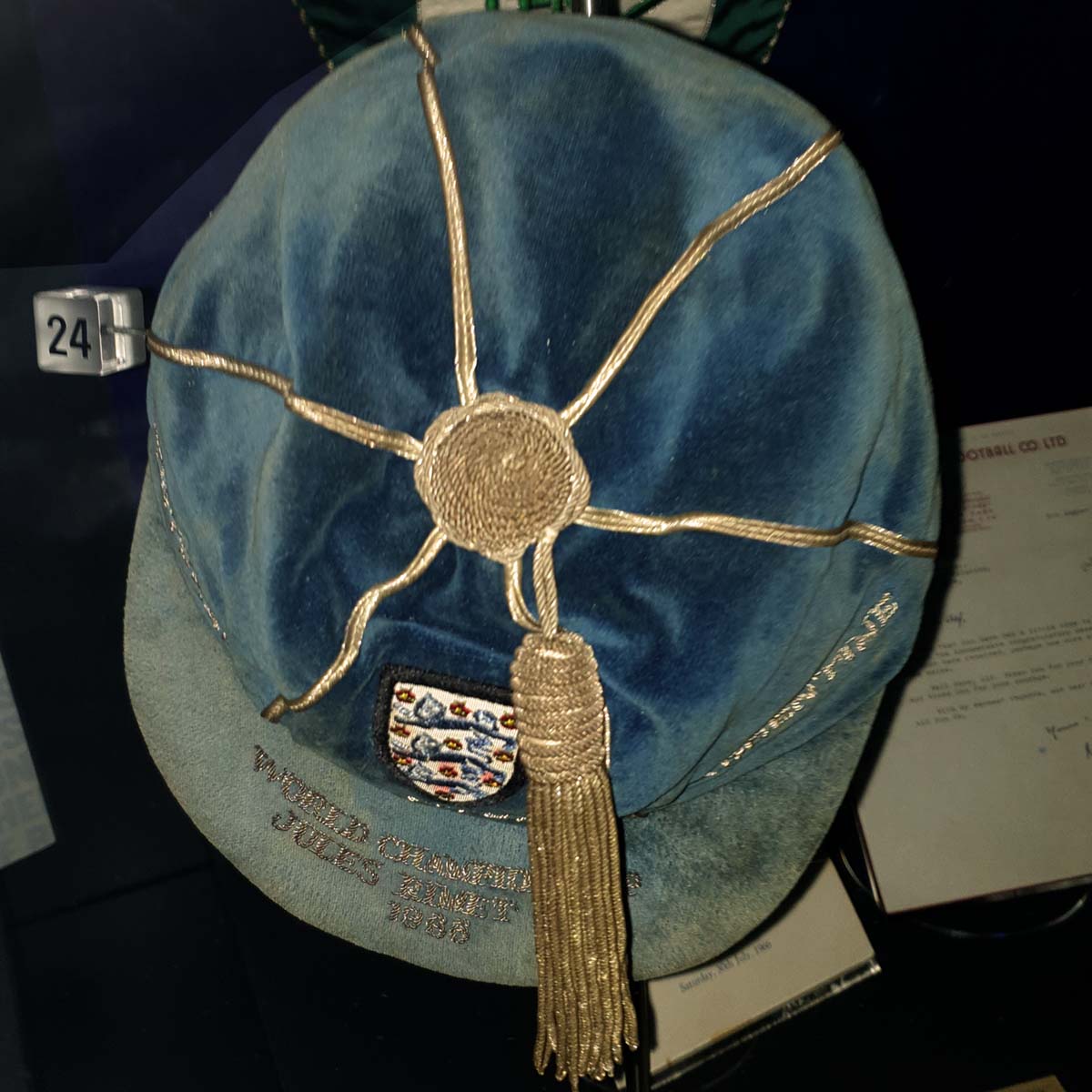 This is the England cap given to Roger Hunt for his appearances for his country in the 1966 World Cup. Roger played in every single match in the tournament and scored three goals to help the Three Lions reach the final.

He played a key role in the finest hour for England as they became champions of the world.

This cap was loaned to the museum by Roger and is currently on display in our England on the World Stage gallery.

Having been given an England debut in 1962 by Walter Winterbottom, it was Hunt’s willingness to work for the team under Alf Ramsey that converted him from goal-grabbing squad member (he was part of the 1962 World Cup squad, but didn’t play) to guaranteed starter in time for the World Cup in 1966.

Alf Ramsey’s insistence on a high work rate from his forwards had made Hunt an indispensable member of the team; highly valued by his colleagues as, in the words of Martin Peters, “we all knew Roger would run his socks off for the team”.

For Liverpool, Shankly used Hunt as an out-and-out striker. His outstanding work-rate and the variety of goals he was capable of scoring earned him the nickname ‘Sir’ Roger from the Kop.

At Anfield he became a legend. He was central to the birth of the 1960s Liverpool. He played for the Reds 492 times and scored a record 245 league goals. His total haul for the club has only been bettered by Ian Rush.

More than 56,000 showed up for Hunt’s Anfield testimonial in 1972 – with 5000 fans locked out. That day a team of England’s World Cup winners played Liverpool’s 1965 Cup winners. Both teams owed much of their success to Hunt.

Even in 2021 Hunt remains Liverpool FC’s leading league goalscorer. On the Kop today a huge flag pays tribute to the man loved by his people.

Why is he called ‘Sir Roger’?

Roger Hunt was never bestowed a knighthood but was honoured by the fans who adored him.

The fans at Anfield called him ‘Sir Roger’ which may also have been because he was the perfect gentleman on and off the field. 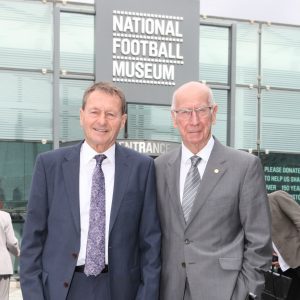 Sir Roger with Sir Bobby at the museum

What relationship did he have with the museum?

Roger Hunt was inducted to the National Football Museum Hall Of Fame in 2006.

Among his many career achievements he scored the first goal on BBC’s Match Of The Day, in the first game of the 1964-65 season, against Arsenal.

Fifty years on Roger kindly loaned his 1964 League winners’ medal and 1965 FA Cup medal to the museum for display.

A modest, unassuming man, he visited the museum by train, and spoke to staff about his memories of the game and era over a cup of tea in the cafe.

The handful of visitors who recognised one of England’s great strikers that day were all greeted cheerfully.