Object of the Week: Ball from the 1966 World Cup Final Calendar

Geoff Hurst struck it three times into Germany’s net as England won their first and only World Cup in 1966.

Head of Collections Wiebke Cullen tells the story of this iconic object. 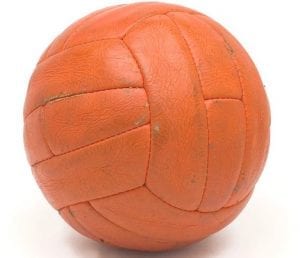 Tell us about this ball

This was used in the World Cup Final between England and West Germany at Wembley Stadium on 30 July 1966. It has been loaned to the museum courtesy of Mirror Group, Eurostar and Virgin and is one of our most popular objects.

Why is that match so important?

It was the first and only time that England have won the World Cup. The 1966 finals were played in England with matches held at grounds including Old Trafford, Goodison, Villa Park, Hillsborough, Roker Park, Ayresome Park and White City. The final was held at Wembley and the country stopped to watch Bobby Moore lead his Lions to glory. The images of the England team in all-red shirts with the Jules Rimet trophy are iconic.

What was the score?

The score was 2-2 at full time. England eventually went on to win 4-2 after extra-time. Geoff Hurst scored three and Martin Peters got the other. 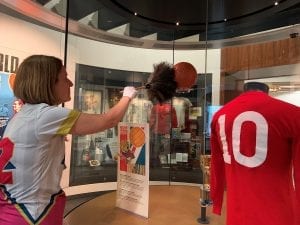 Why is this ball so significant?

There was only one ball used in the match.

There were a couple of spares in case the match ball got damaged, but those were not used. So we know that this is the ball at the heart of that huge game that day.

This was England’s first (and still only) World Cup title, and this makes the ball unique. The final was watched by more than 95,000 spectators in the stadium as well as more than 30 million TV viewers in Britain.

Many of our visitors instantly recognise the iconic orange ball and reminisce about the tournament and final. It’s a very special object to so many people.

What happened to the ball after the game and how did it the museum acquire it?

The ball was taken by German forward Helmut Haller.  He claimed it was German tradition for the first goal scorer of the match to keep the match ball.

He carried it under his arm when he went up to receive his runners-up medal. He then took it back to Germany and there it remained at his house for three decades.

The Daily Mirror ran a campaign to return the ball to England in 1996 ahead of the Euros. 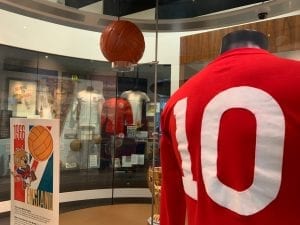 How do we look after it?

The ball is very fragile. It’s keeping its shape really well, so we try and handle it as little as possible.

Due to its orange colour it is light-sensitive, and it would start to fade in bright light. We frequently monitor the light levels on our galleries and keep the lights low for sensitive material such as artworks and textiles.

The temperature and relative humidity are also controlled inside the case so that the ball is always in as ideal an environment as possible to prolong its life for the enjoyment of future generations.

What is the signature on the ball?

The ball was supposedly signed by all the players during the celebratory dinner after the tournament, however, all those signatures have over time rubbed off and are not visible.

When the ball returned to England during Euro 96, illusionist Uri Geller signed it. He said it was his  bid to ‘energise’ it and help the England team to success in the tournament (they lost in the semi-final).

Some visitors lament the fact that the ball is not exactly how it was on the day of the final in 1966. We believe though that the signature is now part of the ball’s story.

What are the other objects on display relating to the 1966 World Cup?

The story of 1966 is told in our England on the World Stage exhibition in the permanent galleries.

We also tell stories about the tournament venues, ‘World Cup Willie’ merchandise, and the theft of the Jules Rimet trophy and recovery by Pickles the dog.

The Slazenger ball features in our First 11 series on the history of footballs. Check it out below, and watch the full line-up of videos on YouTube: