Blackpool fan Jon Sutton looks at a scarf which symbolises the struggle between supporters and club’s owners.

A Blackpool protest scarf which refers to the club’s then owners – The Oyston family.

Blackpool fans staged a five year boycott of the club. They were unhappy at a lack of investment in the club and team despite the luxuries of promotion to the Premier League in 2010.

If the wrong people are in charge, the Premier League can be the worst thing that ever happens to a football club…

Why is this scarf so significant?

From 2014 until March 2019, Blackpool fans boycotted home games in protest at the owners. The Not a Penny More campaign aimed to impact on the Oystons by reducing income through vastly reduced attendances and avoiding club merchandise.

The Blackpool Supporters Trust fought tirelessly for change during this time and orchestrated some incredible protests with games played in a near-empty Bloomfield Road.

How did the museum acquire the scarf?

I’m a Blackpool fan and purchased it ahead of the team’s trip to Huddersfield Town in October 2014. The protest was fully underway by that point as Blackpool were rock bottom of the Championship and had a cobbled together team of freebies and bargain buys who other teams clearly didn’t want.

The Seasiders could just about field a team and were 3-0 down after 15 minutes.  The atmosphere was toxic. It was the opposite of how watching football is supposed to make you feel. Blackpool were relegated to League Two in 2016, just five years after they had been unluckily relegated from the Premier League.

Is the scarf on display?

Not currently, but it was displayed in our Football is Art exhibition last year above Gary Armer’s painting Not A Penny More which he created as a response to the dire situation at Blackpool. 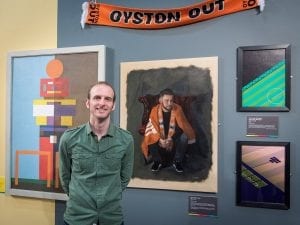 It will be displayed again in the future alongside other objects linked to fan protest. The need to protest is happening more and more, in the last 12 months alone we’ve had the tragic situation at Bury play out and the bizarre administration of Wigan Athletic.

More needs to be done to protect football clubs as community assets and there needs to be increased scrutiny of owners from the authorities.

Football fans campaigning against club owners, is this a relatively new phenomenon?

Not at all, there have been many over the years.

One of the highest profile campaigns was against Malcolm Glazer after he acquired a majority stake of Manchester United in 2005. FC United of Manchester was born during this period as an alternative club for those boycotting.

Another high-profile campaign against club owners happened when Wimbledon fans fought to save their club after a takeover which saw them move to Milton Keynes. While the club’s owners insisted the move was the only way to survive, it was opposed by Wimbledon fans.

Within weeks, fans founded a new team. AFC Wimbledon were born to once again give the town a community asset to be proud of.

Was there a happy ending to the Blackpool protest?

On 9 March 2019 Blackpool played Southend United in what was their first home fixture since the departure of Owen Oyston.

It marked the end of the longest fan boycott in the history of English football.

I still get goosebumps thinking about how special it felt to enter Bloomfield Road that day after years of boycotting. My Oyston Out scarf was no longer needed and belonged in a museum.

The club now have a wonderful new owner in Simon Sadler who owns Stanley Matthews’ 1953 FA Cup winner’s medal that we have on display. He is dedicated to making Blackpool FC an important part of the local community again and is looking at measured growth after years of neglect.

The fans chant: “He’s one of our own” and to be honest, how many supporters sing that about their owners?