Designed by Stella McCartney and worn at Wembley in front of 72000 fans. Curator of Women’s Football Belinda Scarlett looks at a shirt worn by England legend Casey Stoney. 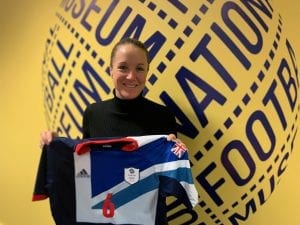 This is one of my favourites from the collection, a Great Britain Olympic 2012 shirt, worn by defender Casey Stoney, MBE.

It was worn when Casey captained Team GB in the tournament against Brazil at Wembley – a match played in front of 72000 fans.

It has everything a great object should have, it’s a fantastic design, from a great player and it commemorates a significant event.

Team GB beat Brazil 1-0 thanks to a Steph Houghton goal in the second minute. The result propelled the side to top of Group 3.

Why is the shirt important?

Fashion designer Stella McCartney was appointed creative director of Adidas’ 2012 Olympic collection for both the Olympic and Paralympic games held in London.

She created this bold take on the Union Jack for the women’s and men’s football teams.

2012 was the first time a GB women’s team had played in the Olympics and under coach Hope Powell they reached the quarter-finals, losing to Canada.

We were delighted when Casey visited the museum in February 2020 as part of our Children’s Football Writing festival. She came to talk about her new children’s book and inspired a big group of young people with an insight into her route into football and her career.

She brought the shirt along with her and presented to the museum as a gift. 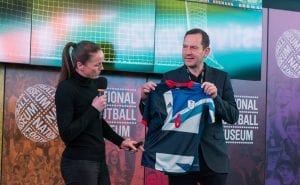 Tell us about Casey Stoney’s career

Casey Stoney has had an impressive player career and is now a manager.

Many will know her now as the boss of Manchester United Women. Before this she had a successful club career with Arsenal, Charlton Athletic and Chelsea. She achieved 130 appearances for England, making her one of the nation’s most capped players.

As an openly gay woman, Casey Stoney is also an inspiration to the LGBT+ community and is a dedicated campaigner for the women’s game.

Is the shirt on display?

At the moment the shirt isn’t on display. Next year (2021) is going to be a big year for women’s football at the National Football Museum with a variety of new displays planned. I hope that the shirt will go on display as part of this.