With the return of the Women’s Super League (WSL) this weekend, curator Belinda Scarlett looks back at the history of one of the most dominant teams of the 1990s and 2000s – Arsenal 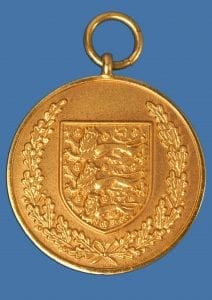 This medal is significant as the 1994-1995 season was the first time the FA had taken on the administration of the women’s national league, making it the FA Women’s Premier League (FAWPL). Between 1991 and 1994 the Women’s National League had been organised by the Women’s Football Association who had revolutionised the organisation of the women’s game since the late 1960s. 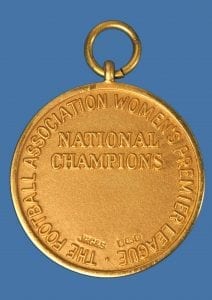 Which player was it awarded to?

Unfortunately we don’t know which player this medal was awarded to, but the 94-95 team included England goalkeeper Pauline Cope and attacking midfielder Marieanne Spacey who both represented England in the Women’s World Cup in the summer of 1995.

How dominant were Arsenal at this time?

Arsenal Women were founded in 1987 by Vic Akers whose influential leadership helped them become one of the most dominant women’s teams of all time. After their first Premier League win in the 94/95 season they went on to win 11 more League titles, they have also won 10 FA Cups and 10 League Cups. They are still the only English team to win the UEFA Women’s Cup in 2007 a tournament which was later re-branded as the Women’s Champions League.

Is the medal on show?

The medal is in storage at our archive at the moment, but as we work towards increasing our representation of the women’s game on our galleries, we hope to display it soon.