It looks like a prop from Phantom of the Opera – but is in fact a symbol of the resilience of one of England’s top female players.

Faye White is one of the most decorated players in the game, having amassed an incredible 31 trophies during her long playing career with Arsenal Ladies.

She also gained 90 caps for England, most of them as captain. This face mask was worn by White to protect a fractured cheekbone in the latter stages of England’s Euro 2009 campaign. Curator of Women’s Football Belinda Scarlett takes a closer look… 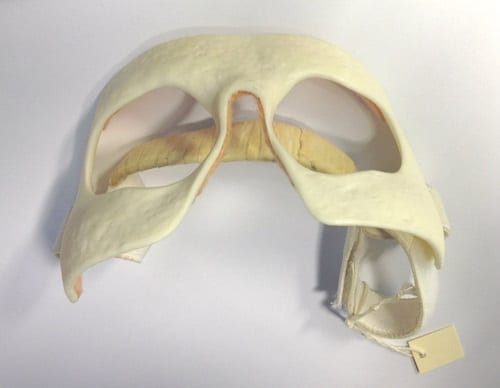 This specially designed protective face mask was made for England captain Faye White to wear during the UEFA Women’s European Championship when England met Germany in the final. Faye had dislocated and fractured her cheekbone during the quarter-final against Finland, but she was determined to captain the team to their second UEFA European final.

The mask was donated to the museum by White following her induction into the museum’s Hall of Fame in 2015. She captained the England women’s team from 2002 until her retirement from international football in 2012.

What does the mask symbolise?

For me, the mask symbolises the resilience of England’s female players and their determination to keep playing despite the difficulties they experience both physically and more generally within society. An equivalent for the men’s game would be the famous neck brace worn by Bert Trautmann after he injured his neck during the 1956 FA Cup final. 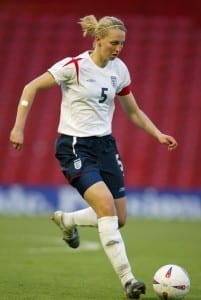 Faye White playing for England. Photo courtesy of The FA

This item is a one-off and tells such an inspiring story from one England’s greatest players. At the time Faye White was quoted as saying “You don’t get this far and wimp out”, when asked why she chose to wear the mask and keep playing. These are the types of hidden stories within the women’s game that we want to tell at the National Football Museum.

The mask is currently on display as part of our dedicated Hall of Fame exhibition, honouring the players who have made a difference on and off the pitch. Faye is one of the fifty players featured – unsurprisingly, she is in the Courageous section of the exhibition!