The clickety click of a turnstile is one of the most familiar sounds in football. At the museum we have an original turnstile from the home of football – Wembley Stadium. Head of Collections Wiebke Cullen takes a closer look at one of the heaviest objects in our collection. 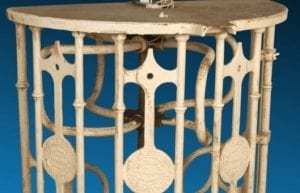 This is one of the original 100 turnstiles that were installed at the Empire Stadium, Wembley, in 1923.

It is a great example of an original ‘rush preventive turnstile’ patented by W T Ellison in Salford at the end of the 19th century.

These turnstiles were installed at all major sporting grounds in the UK for managing crowds entering stadiums.

Before, football clubs relied on gatemen to collect the ticket money and let spectators enter the ground. Once turnstiles were installed, clubs could largely prevent anyone from going in without paying.

Every football fan is used to entering the ground through a turnstile. Nowadays turnstiles are full-height, functional industrial units, that are much less ornamental and decorative, and modern technology connects them to counting software and ticketing systems.

How long was it in use at Wembley?

It was installed at the original Wembley Stadium in 1923 and remained there for almost a century. We believe it was removed when the old Wembley Stadium was demolished in 2002/3.

It’s conceivable that several million sports and music fans have passed through this turnstile during its lifetime. Quite mind-boggling really. 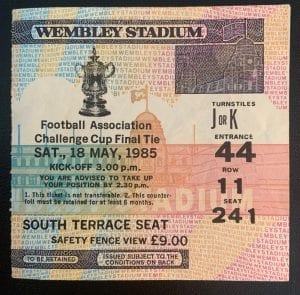 It must have been in use for many famous matches?

Wembley is the venue for many famous football matches, other sports and music events.

This turnstile would have been in situ for the biggest sporting fixtures not just in English football history but in global sporting moments.

As well as annual fixtures such as the FA Cup, League Cup and Rugby League Challenge Cup finals, the turnstile was in use during the 1966 World Cup, Euro 96, the 1948 Summer Olympics as well as the 1992 and 1995 Rugby League World Cup finals and the Live Aid charity concert in 1985.

When did the museum acquire it?

We took in a large amount of the Wembley collection after the original stadium closed in 2002 for a complete redevelopment. A large part went on display for a temporary exhibition, but a few items have been on permanent display since, such as this turnstile.

It must be heavy? How did you get it to the museum?

The turnstile is fairly heavy and difficult to lift.

It was stored at our Resource Centre at Preston while the new galleries at Manchester were developed and put together in 2012. We used specialist museum transport to transfer objects. The turnstile was  installed by specialist mount-makers together with our curatorial team.

It took a few people to lift and manoeuvre the turnstile into place, and we needed to secure the rotating arms so that visitors can’t move the turnstile.

How do we tell the story of stadiums at the museum?

There is a dedicated area in our permanent galleries where we tell the story of stadiums.

This covers stories such as the stadium design and the work of the famous architect Archibald Leitch as well as large objects from stadiums, for example seating, a crush barrier and the turnstile.

We also look at darker days of stadium with a section on football disasters at Bradford in 1985 and Hillsborough in 1989.

We also try and tell stories on how fans see and use the ground of their local club, from matchday experiences to special occasions such as holding a wedding ceremony on the pitch.