A dazzling winger with pace and skill to boot, Rachel Yankey was the first professional female player registered in England – and was arguably one of the most successful. Catriona Kelly looks at the career of this amazing England international. 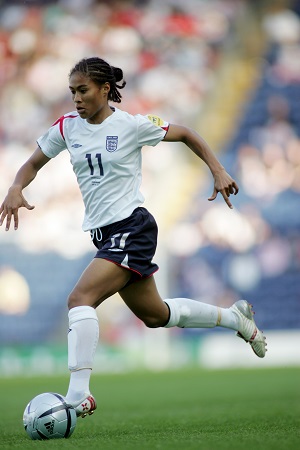 Who is Rachel Yankey?

Rachel Yankey was born in London in 1979. She was the first registered professional female footballer in England. As a quick and highly skilled winger, her playing career spanned 20 years beginning with Arsenal Ladies in 1996. She also played with Laval Dynamites, Fulham Ladies, Birmingham Ladies, New Jersey Wildcats and Notts County. She won a staggering 26 major trophies in her career.

This number 17 England shirt was worn by Yankey during the UEFA Euro qualifiers in the winter of 2000. It is likely this jersey was worn during England’s 2-1 first leg play-off victory over Ukraine in which Yankey scored one of the goals.

How successful was she with Arsenal?

She is an Arsenal Ladies legend. At the Gunners Yankey won eight league titles, nine FA Cups and a UEFA Women’s Cup before leaving at the end of her contract in December 2016.

Her England statistics are amazing too…

As well as being the second female player to make 100 international appearances (after Gillian Coultard), Yankey is credited with setting a record for international caps for England.

In 2013, she overtook Peter Shilton’s previous record of 125. Yankey was eventually capped 129 times and scored for her country 19 times. Only four players have since represented England more than Yankey.

What did she do after her playing career?

Yankey served as both First Team Coach and Head Coach of London Bees in 2018 and 2019 respectively. In addition, she played in the first Soccer Aid line-up to include female footballers in 2019 which raised over £6 million for charity.

When she isn’t playing, Yankey spends her time coaching children in schools and has experience as a football pundit and presenter of CBBC show ‘Footy Pups’.

Yankey was awarded an MBE in 2005 and received her OBE in 2013 for services to football.

She has also been involved in important conversations surrounding lack of coaching opportunities for women, the need for football to diversify and experiences of racism in the sport.

She was inducted into the National Football Museum Hall of Fame in 2017.

The museum looked at this shirt and Yankey’s story in its First 11 video series, telling the stories of trailblazing Black footballers:

Is this shirt on display in the museum?

This shirt is not on display at the moment. But we hope to be able to show it during our women’s football exhibition, which opens in spring 2021.