On what would’ve been Women’s FA Cup Final week, curator Belinda Scarlett looks at this unique Subbuteo set. This version of the famous table football game was produced in limited numbers in 2018 to mark the final between Arsenal and Chelsea which was won by the Blues.

This limited-edition Subbuteo set was made in partnership with the Football Association to celebrate the 2018 SSE Women’s FA Cup Final. It was the first and only time that a women’s team featured in Subbuteo. There was a lot of excitement when the set was announced but many were disappointed when it turned out the set was not for sale commercially. 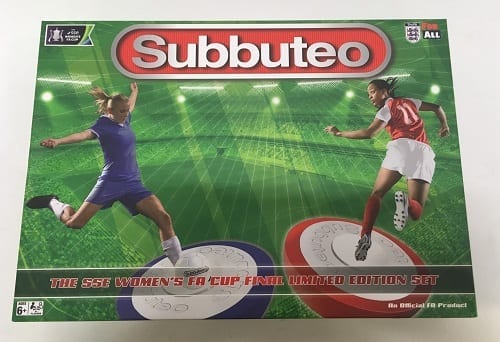 We were very happy to receive an offer from Ogilvy, the PR company behind the campaign to produce the limited-edition Subbuteo set to create awareness of the Women’s FA Cup Final in 2018. The National Football Museum is a charity and we rely on donations from organisations, players and fans to allow us to tell England’s diverse football story.

How rare is it?

The set is very rare as it is the only official Subbuteo set to be made featuring female players and wasn’t on general sale. It was a fantastic addition to the National Football Museum’s collection.

How have women footballers been portrayed in table football games historically?

Mostly, they haven’t! The world of football toys and collectables has been dominated by men’s teams and players and produced and marketed almost exclusively for boys. We do have a few examples of football toys probably made with girls in mind, including a small doll from the 1930s and Barbie dolls of the US 1999 World Cup team such as Mia Hamm. I’m sure many girls who loved football remember playing with male Subbuteo teams growing up and would have loved female players to play with.

Tell us about the museum’s collecting in relation to the women’s game.

The museum is committed to increasing the number of women’s football objects in our collection and our exhibitions. We are actively collecting objects and stories that reflect women’s and girl’s love of football. By 2022 we will aim for our collecting to be 50% about the women’s game.

Can people see this item on gallery?

Not yet, but as we re-develop our galleries in line with our 50% representation pledge, we will be putting more and more women’s football objects on display. We do have a fantastic display of toys and games, including Subbuteo, on display in our Play Gallery. Over the next few years we will be updating this gallery to look at how football gaming and technology has changed and developed. If there are female football gamers and toy collectors reading this, we would love them to get in touch and share their stories.