Objects of the Week: Football and fine art – a match made in heaven Calendar

Art has been part of the stories and conversations about football heritage for decades, and it particularly had a moment to shine in the year 1953.

This was the year of The FA’s 90th anniversary, for which they held a Football and the Fine Arts competition exhibition with cash prizes.

Many famous football artworks featured in the competition, such as L.S. Lowry’s Going to the Match.

British Surrealist Ithell Colquhoun’s painting, The Game Of The Year, was created in that year, but did not feature in the exhibition. 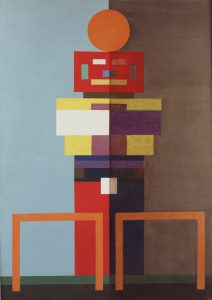 The specific inspiration for the painting is unknown. It’s thought it was either inspired by, or submitted to the competition.

British architect Trevor Dannatt remembers that Colquhoun consulted him about “a ‘Football’ painting competition she was going in for”, meaning perhaps she did submit it to the competition.

On the other hand, entries closed before the 1953 FA Cup final, which has been widely speculated as the game the title refers to.

What does this painting depict?

The painting has a symmetrical composition with two goalposts and a towering totemic figure that has inverted colours, just as the opposing teams in a football match do, heading a ball.

This equally constructed player shows how a football match can go either way, and is balanced between the two teams, much like how the player is balancing the ball on their head.

Tangerine is associated with Blackpool FC who dramatically won the final with a famous comeback. The match became known as The Matthews Final, after Sir Stanley Matthews inspired a fightback. The painting features a huge lone figure that could represent Matthews and his contribution to the final with a performance that changed the outcome of the game as his team won 4-3.

Tell us about the artist

Only recently has Ithell Colquhoun’s work been properly recognised and appreciated, whereas previously she was a more obscure figure within British Surrealism.

She and her work had more of a reputation in the occult world, particularly for the tarot cards she painted. She left the British Surrealists in 1940, most probably because she felt constrained by the group. This painting is visually similar to one of her others, Crucifixion, also from 1953, which was a design planned for the Maze Hill Congregational Church, and features a similar figure.

What does this painting tell us about sports heritage?

This painting tells us that sport can inspire art, and all kinds of art at that, with this being the work of a surrealist. It also shows us how football connected with the arts in the past, whether it was inspired by the 1953 FA Cup final or not.

Tell us about a more contemporary work

Art has also been an important part of the conversations about football heritage in more recent times, and can engage in and be used to convey important messages.

Jill Iliffe has done a lot of work around women’s football, as she wanted to highlight women that were “forgotten and not part of the history of football” that she could see in 2005/6.

She was involved in the Moving the Goalposts exhibition at the People’s History Museum that was timed to coincide with the launch of the Women’s Super League in 2011. Her painting Banned was created sometime between the years of 2007-2010.

What does the painting depict?

The painting has a green background and features two hijabi footballers wearing red. It is a close picture of the action, giving the painting a heightened sense of drama and excitement. Iliffe wanted the women to look “strong, enthusiastic and unhindered”.

What has the artist said about the painting and its message?

Banned was created out of the the idea of “looking for an arresting image that countered what most people’s immediate thoughts are when they think about football or think about Muslim women”. Her work aims to counter the assumption that woman have to be a certain way in order to participate in the beloved game.

How is the painting representative of the NSHD 2021 theme, ‘Inspire, Share and Celebrate’?

In a 2011 Olympic qualifier between Iran and Jordan’s women’s teams, Iran were not allowed to play because of their hijabs. Hijabis were ‘banned’ from playing football because of their faith, but continued to fight.

In 2016, the hijab was finally welcomed at a major FIFA tournament, the U17 Women’s World Cup, a huge moment for these previously ‘banned’ women. This painting not only highlights and celebrates the strength of real life hijabi footballers, but can also inspire young girls who may think they cannot, or are not welcome to, participate in the sport, to play.

These two paintings can help us consider what our sports heritage is, and celebrate the relationship between football and art.

National Sporting Heritage Day is an annual celebration that started in 2014 honouring sporting heritage and pioneers in order to share stories and inspire future generations.