Object(s) of the Week: When Brentford were last in the top flight Calendar

The first fixture of the new Premier League season takes place on Friday evening when new boys Brentford entertain Arsenal at their new stadium. It sees the Bees return to the top flight for the first time in 74 years. 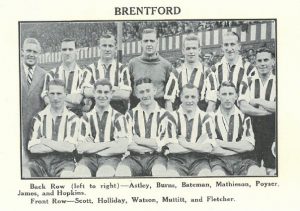 Uma Ghelani turns the clock back to look at a golden pre-war era for the West London club:

Brentford have returned to the top division for the first time since shortly after the end of the second world war.

Their previous stint in top flight football took place between 1935-1947, finishing fifth in their first campaign in the old First Division.

In that debut season they finished one point above FA Cup winners Arsenal.

Founded in 1889, the West London club have had a rollercoaster journey up and down leagues. In their early years they played at five different grounds before moving to Griffin Park in 1904 which was home for more than a century.

During their spell in the First Division, Brentford faced Arsenal 10 times. They won five, drew three and lost only twice, giving them a pretty good record against The Gunners. In modern times the teams have gone head-to-head once, in the League Cup in 2018/19 as Arsenal won 3-1.

An interesting object related to Brentford is this black and white picture card of Jack Holliday from Topical Times in 1930.

Jack Holliday of Brentford FC in 1930

Topical Times was the first weekly newspaper that featured a high volume of football related content, and would have cards featuring various players as free inserts.

Jack Holliday was one of Brentford’s all-time top strikers, and holds club records for most league goals in a season (38), most hat-tricks (nine). He scored 116 goals in 213 league appearances.

Another interesting object is this paperback supplement booklet from the Topical Times in 1934. The Star Teams Photo Album contains black and white photographs alongside histories of different football clubs. 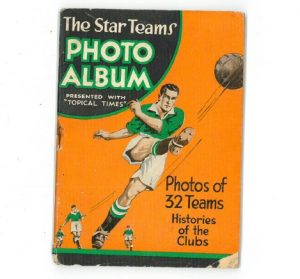 It contains pages on both Brentford and Arsenal, although funnily enough this was the year before Brentford became a First Division team.

In bold there is the most relevant or important parts of each club’s history. For Brentford’s, the booklet has their formation and being one of the best amateur clubs in London for 10 years in bold. Them being in the Third Division for 13 seasons before winning and being promoted to the Second Division is also deemed important as it is also printed in bold. 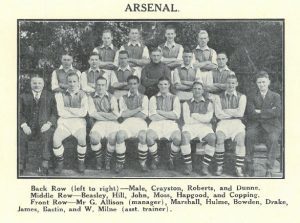 Even by looking at the two histories and pictures side-by-side it is clear that there is a difference in terms of money and trophy success. However, both are still included in this booklet of “Star Teams”, showing that a gulf in finances didn’t matter, and that football is enjoyable at all levels.

All in all, Friday’s fixture will most definitely be one to watch, and will hopefully get the season of to a thrilling start.

It also seems relevant to point out that it is on a Friday the 13th – could there be a freak result?