Out of Play Highlights Creative Technology in Football Calendar 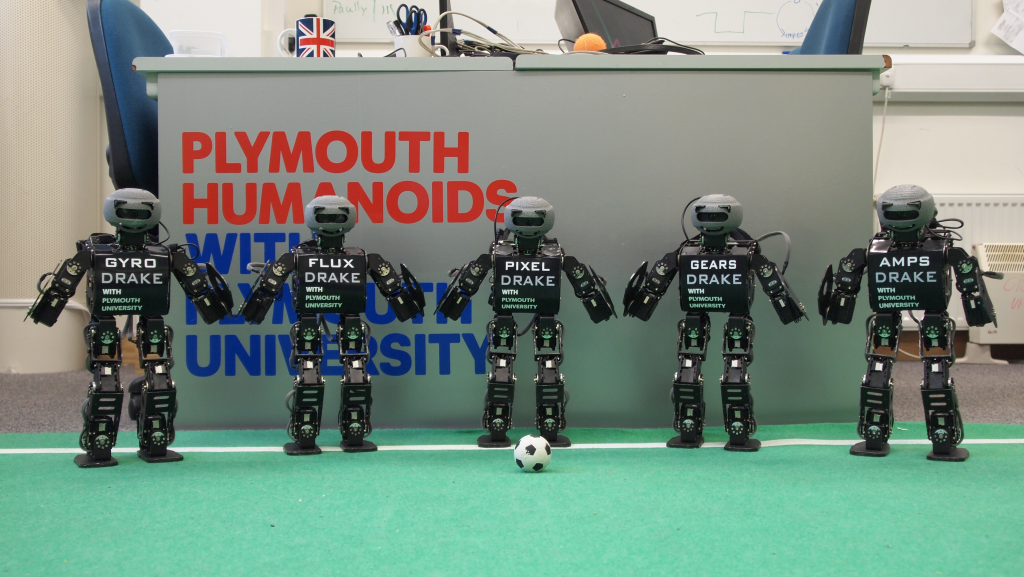 An ongoing project exploring the worlds of football, art and technology has led to a new series of displays and events at the National Football Museum.

Out Of Play is the museum’s project to explore the beautiful game’s wider relationship with technology, art, and how fans enjoy and respond to the game.

A new display in the museum’s main galleries will highlight some of the more unusual technological advances that have occurred because of the game. Amongst the displays will be a ‘SOCCKET’ ball; a football with an electricity-generating dynamo that allows people to create energy from a kickabout. The balls are already being used in refugee camps and remote villages where they can power lights, radios and phones after just a few minutes’ play.

A football-playing humanoid robot created by University of Plymouth will be in the galleries, alongside a ‘Leg Shocker’: an artist-created piece of ‘wearable tech’ that simulates the effects of tackles for football videogame players. This artefact will perhaps demonstrate where technology can sometimes go astray in the pursuit of bringing fans ‘closer’ to the game they love.

Curator of the project John O’Shea commented. “Many people associate technology in football with the latest shirt or boots. But more than the players, technology is about creating new ways for fans to interact with, learn about and experience the game.”

The gallery displays will be available from 9 May, when a workshop for World Scratch Day will also encourage young visitors to learn about coding, to create simple football-inspired computer games.

From June 19, the museum’s immersive cinema space will be used to house a world premiere of a work that captures the scale of the World Cup final as a global event, via the power of social media. Jer Thorp’s ‘The Time Of The Game’ features images of the 2014 FIFA World Cup Final as it was shared across the world via Twitter users. The spectacle of the game is shown through hundreds of uploaded images; but while the game remains the same, the surroundings reflect the wide range of global locations and situations that people experience while watching the global game.

Also on display will be ‘We Tripped El Hadj Diouf’, a curatorial project led by Jason Eppink, previously shown at the Museum of Moving Image in New York. Imaginative and playful responses posted online create a range of humorous ‘remixes’ of footballer El Hadj Diouf being fouled on the pitch.

A number of artist residencies as part of the project will also be launched. As video sharing platform Vine becomes a popular way to watch and respond to short highlights clips, the museum is running an ‘Archivathon’ online to capture the shared highlights of the 2014/15 season.

A project with artist Matthew Plummer Fernandez will use Forest Green Rovers’ innovative robot lawnmower to create art on the pitch and create an online personality for the ‘Mow-bot’.

Artists Jen Southern and Chris Speed have already started a work entitled ‘Unruly Pitch’, by GPS tagging a number of players in this year’s ‘Uppies & Downies’ game in Workington, Cumbria. This traditional mob-football game has been in existence since medieval times, but the introduction of modern technology will create surprising, creative results.

With further work and residencies to be announced, O’Shea is proud of the work being showcased at the museum: “There is a level of humour, creativity and technological expertise in these works that goes beyond people’s traditional assumptions of football’s boundaries.

“Visitors will be encouraged to think about the wider implications, both positive and negative, of new technologies and the game football.”