Objects of the Week: the formation of the Premier League Calendar

The first season of the Premier League took place in 1992/93 and featured 22 clubs. They had always planned to get that down to 20, so in the 1994/95 season, 4 clubs were relegated and only 2 were promoted. Every club plays each other twice — once home and once away, meaning with 20 clubs, there are a total of 380 games played in the league each season, with each club playing 38.

The position of each club in the Premier League table is determined by the number of points, and the relegation and promotion system still works with the Football League, keeping the competition and spirit of the game healthy.

The winners of that first ever Premier League season were Manchester United. This mug that is part of the collections is celebratory ephemera that says “Pride of Manchester. League ­Champions.” 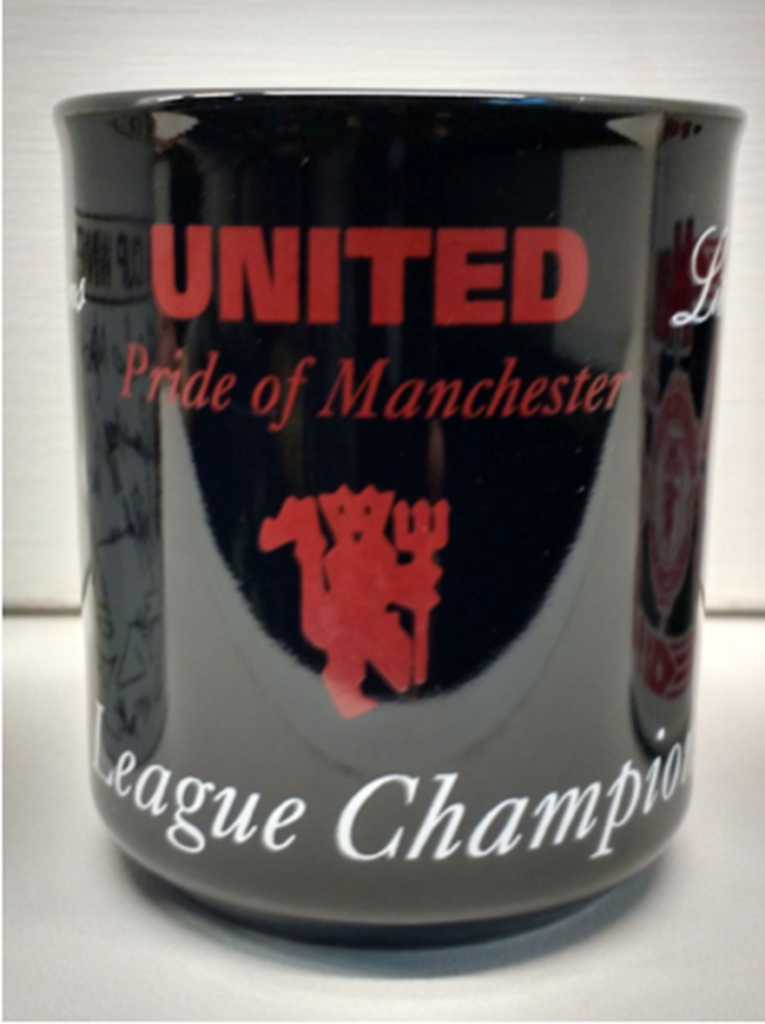 The Football League First Division had been the top league of football in England since 1888, so why did that all change with the Premier League only 30 years ago?

The main argument for the new league was that it would bring more money into the game so that English clubs could compete better with other teams in Europe. In 1992, there were only 11 non-British or Irish players in the top league. With increased revenue, English clubs could attract the best overseas players, as they would have better transfer fees and wages.

The Football League were not dealing with the growing costs efficiently, and there were concerns from the big clubs in that they could not attract quality players because of it. These concerns were made known by the clubs as early as 1988, so in a sense the Premier League was a long time coming.

Sponsorship was another important part of it, as Carling paid £12m for a four year deal with the Premier League, so the competition was known as the FA Carling Premiership, which they went on to renew for another four years. In 2001, Barclays paid £48m to become the new sponsors. In 2007, the price for their renewal was £65.8m for three seasons.

The clubs were also concerned that the potential of broadcasting matches on television was not being fully exploited. Setting up the Premier League, their intentions were to have each club appear in at least one live televised match each season to begin with. They assigned these television rights to Sky TV with a deal worth £191m, which was a bold move. The concept of charging fans to watch televised games was quite new at the time.

However, this was a risk worth taking as the idea of quality football and a place to watch more of the matches was one that succeeded. Between 2007–2010, these television rights were worth a lot more at £1.7bn.

When they were in the Football League, the top division clubs were unhappy with how it was being run and how all 90 member clubs had an equal say even though they were different scales and levels of football. There were five clubs in particular that led the way: Manchester United, Arsenal, Everton, Tottenham Hotspur, and Liverpool. 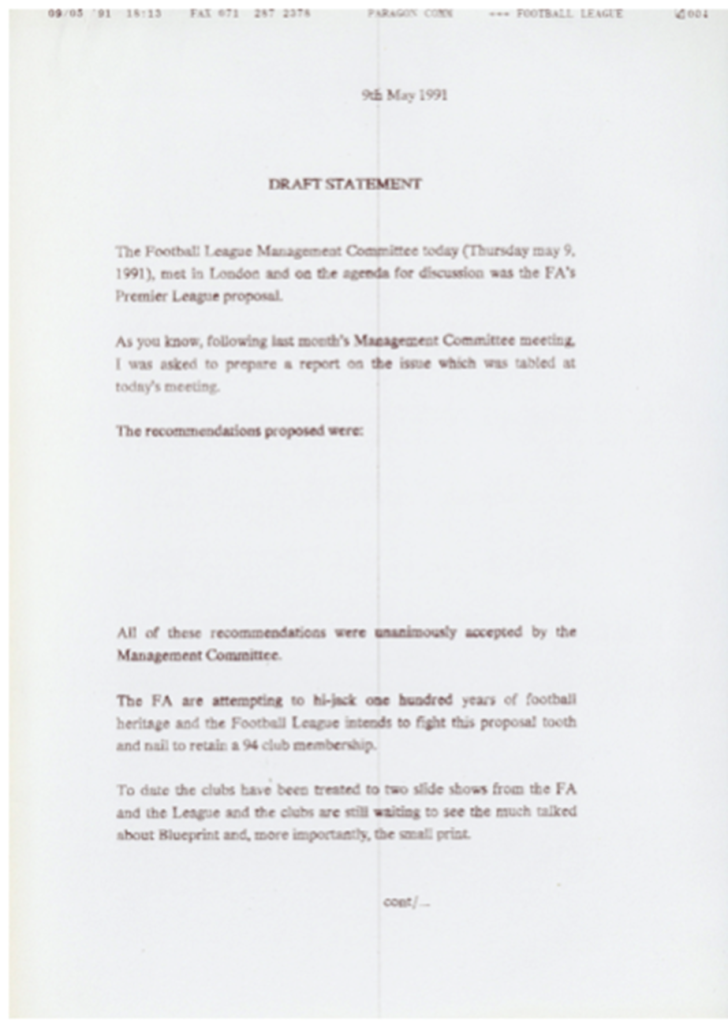 They made it very clear that they were not going to just accept the Premier League and were ready to try and make the clubs stay. It also suggests they were not convinced that the Premier League was actually going to happen at all — “the FA are living in a fool’s paradise if they think that they have the deal wrapped up”; “at the moment the FA is painting a sketchy and evasive picture.” 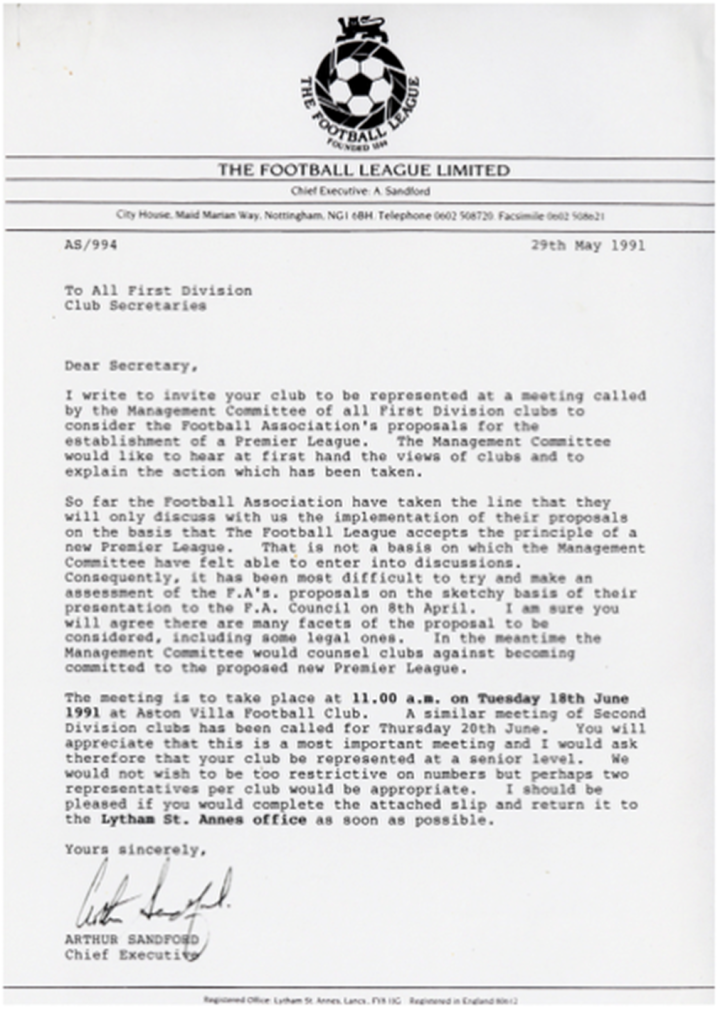 Another document is this letter dated 29th May 1991 from The Football League to all First Division club secretaries, inviting them to a meeting to discuss the proposed formation of the Premier League. Their concerns about the Premier League were very much expressed, and they had still not accepted that is was actually going to happen at all, once again calling the proposals “sketchy”.

In the statement they asked the FA to pick up the phone to set up a meeting with them, with this letter they were asking for the clubs to meet with them, suggesting they were getting nothing from the FA. Although their words suggest they didn’t think the Premier League was serious (e.g. many leagues in sports are launched and then end up folding after a few seasons), their actions suggest they were desperate at this point, and were trying to be part of the conversations that were clearly
happening without them. 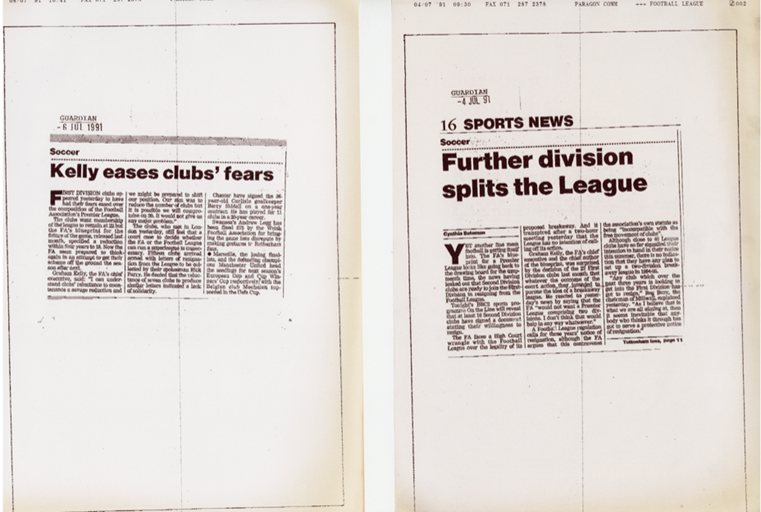 There are also newspaper cuttings of articles on the formation of the Premier League from 1985-91. These show that it wasn’t an easy and straightforward road; the negotiations were tense and tough. Headlines like “First Division clubs ready to resign now”, “FA Court date set” and “Further division splits the League” tell us that it was a tumultuous process, but that the Premier League and the FA were being taken seriously by the clubs and courts, even though the Football League wanted to seem like it was still in control of everything.

To allow English clubs to grow their reach and become more globalised, a restructuring was needed. On 17th July 1991, the Founder Members Agreement was signed by all the top club, which established the groundwork for the Premier League. This League would have independence from the Football League and the FA, and would therefore have the license to negotiate its own broadcasting and sponsorship deals.

The First Division clubs resigned from the Football League on 20th February 1992 and three months later the Premier League was born.

Would English football have continued the path of decline following hooliganism and disasters, leading to less and less interest in the sport from both fans and the best players if it weren’t for the Premier League?

It is hard to know what football would’ve been like now without the Premier League. The Premier League didn’t fold soon after its establishment as some thought it might, it actually flourished and succeeded. It allowed football to be brought into homes not only all over the country, but all over the world, which is something people really wanted.

However, the money in football has become ridiculous, and has brought another set of problems, different problems to the decline experienced in the 70s and 80s.

Either way, the Premier League has brought us a lot of entertainment, joy, sadness, and many other emotions over the past 30 years — matches, moments and memories that will never be forgotten.