When the Reds and Blues shared their matchday programme Calendar

Premiership football is back and the Merseyside derby takes top billing this weekend. Curator Belinda Scarlett looks at a bygone era when Liverpool and Everton shared more than just the same city.

Many moons ago the Reds and Blues produced a joint match programme. An unlikely printing partnership that would last for more than three decades… 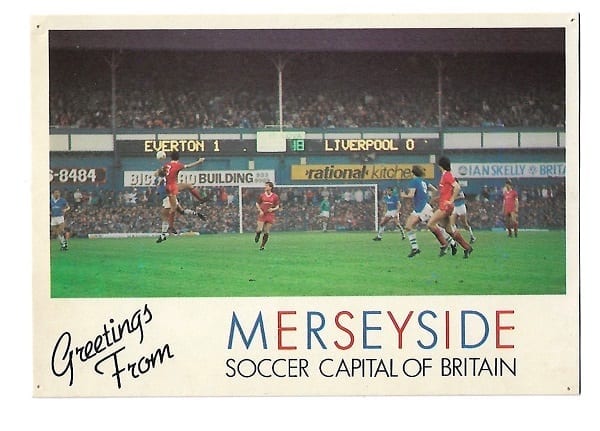 Tell us about this intriguing programme… 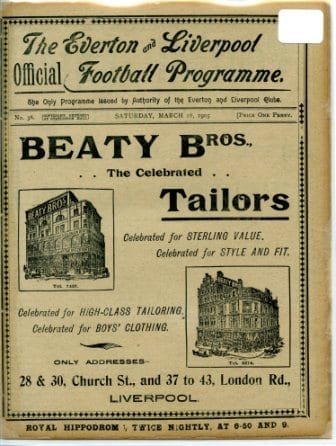 For many fans buying a programme is an important part of the match day experience. Before football was available on TV and radio, it was one of the few ways to find out information about the club and team. But this is a programme with a difference as it was jointly issued between Everton and Liverpool.

It is dated 1905 and states on the front cover ‘The only programme issued by authority of the Everton and Liverpool clubs’.

We don’t know a great deal about the development of the publication. Who wrote it? and who had editorial control? Did people from both clubs contribute equally?

It’s unique that two separate clubs would have one programme…

It seems unthinkable today that Everton and Liverpool would share a match programme. But although there is fierce rivalry between the two clubs’ fans, there is a shared history. Both contribute immensely to the very social fabric of the city and the story of British football as a whole.

Liverpool’s Anfield has been used by both teams. Everton originally played at Anfield with the first game there in 1879. In 1892 following disagreements over finances and rent, Everton FC moved to their new home at Goodison Park and a new club, Liverpool FC started to play at Anfield.

How long did the joint programme last for?

Liverpool and Everton shared this publication between 1904 and 1935 and overall, the two clubs produced 1100 issues together. We are not sure why the joint programme came to an end. It may have been to do with both teams developing stronger, individual identities. Everton were very successful in the 1930s. Could this have been something to do with it? They won the FA Cup in 1933 helped by the firepower of the great Dixie Dean.

Is the programme on show at the National Football Museum?

Yes, we have a small number of these programmes in the collection and one is on display in our Match Gallery. Programmes like this can be very hard for us to display and conserve because they are in such fragile condition.

They were not made to last, often printed on poor quality paper. Most were taken to games and  damaged as a result.

Preserving the paper ephemera of football is one of the most important things we do at the museum. We preserve paper by handling it as little as possible, and when we do we wear gloves.

We store paper in archival, acid-free folders or sleeves to keep them in as good condition as we can for as long as we can. Paper is sensitive to light so we try not to expose it to high light levels whilst on display for long periods of time. The environment in our archive store is also controlled to keep the temperature and humidity at a certain level. 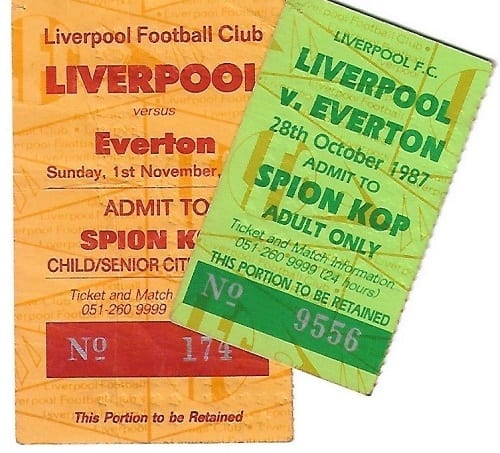 Liverpool V Everton tickets when they played each other twice in a few days in 1987.

Are we trying to get hold of a programme from the forthcoming behind closed doors Merseyside derby?

Whilst the museum has been closed we have been trying to collect objects that represent the impact of coronavirus on football and we would love to include memorabilia from games that are being played behind closed doors as a result of the pandemic. This is a truly defining moment for football and it is very important that the museum captures this challenging time for football and preserves it for the future.

If a club or fan has something of interest for the museum how can they get in touch?

We are collecting football items related to this current season as it’s such an unusual and intriguing time for the national game.  The project is led by myself and Wiebke Cullen (collections manager), you can get in touch via: collections@nationalfootballmuseum.com