Object of the Week: Transfers, Contracts and Wages Calendar

Contracts are always a key topic of discussion in football, something which is especially true when it comes to the transfer windows. As the sport’s technology, finance, reach and various other factors have become more complicated, players’ contracts have become much more extensive.

What was it like before contracts, and when were they introduced?

Before 1885, paying association football players was not legal, but that in turn benefitted a number of players who would be paid huge sums ‘under the counter’. This was not a matter of the clubs wanting to make money, but instead it was about chasing glory. It was thought that these incentive payments would help their best players succeed on the pitch. At this time then, it was the players who held the power as they could move from club to club freely with no professional contracts.

The FA decided to take action, and in 1885 professionalism in association football was legalised. This required all professional players to be registered with the FA and these players legally earned a small wage from the sport. The retain and transfer system was created, and ‘club-hopping’ was put to an end, helping clubs to either keep their players or receive compensation when they left. 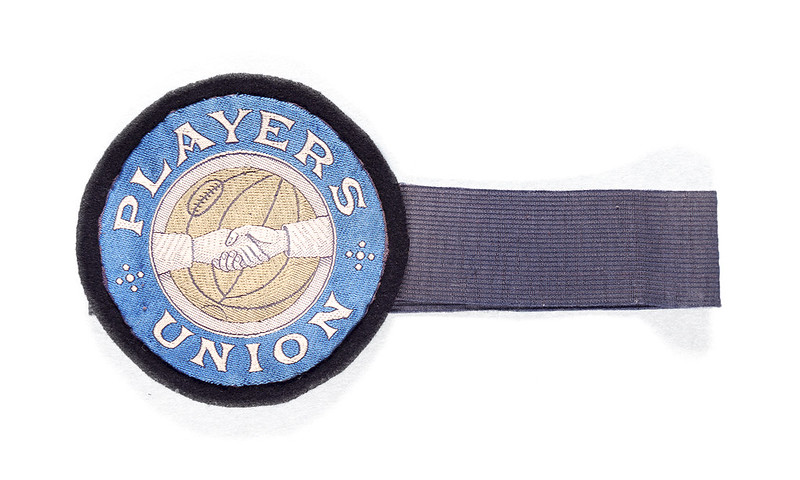 The power balance went from tipping on the side of the players, to now firmly on the side of the clubs. A maximum wage was created — a wage that was fought against for years for being too low, something which is nowadays unthinkable in relation to footballer wages. In 1891, this maximum wage was £4 a week. Because of this, a group of players formed the Association Footballers’ Union (AFU) in 1898, a body which is now known as the Professional Footballers’ Association. 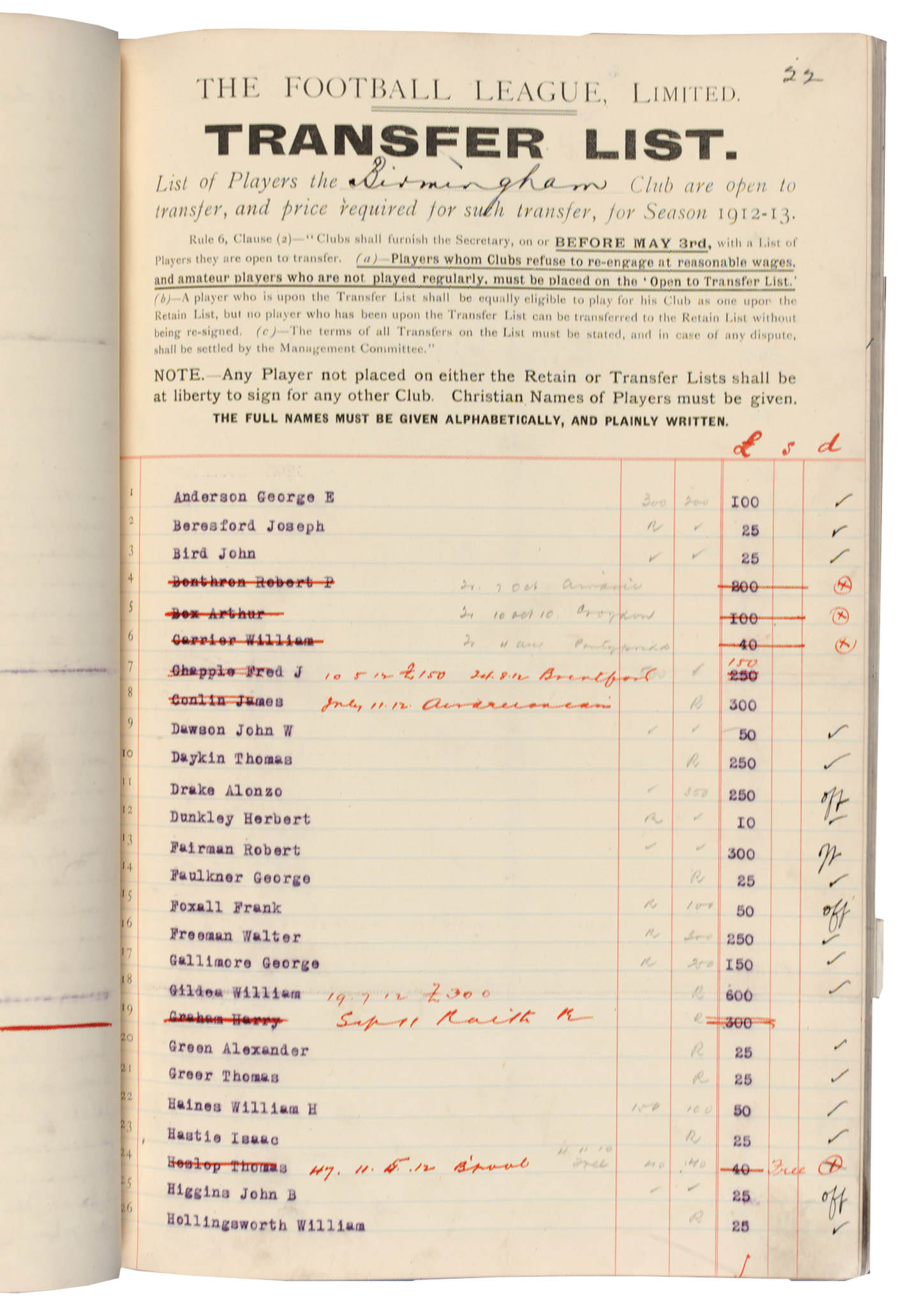 The list is a register, naming the players who are open to transfer in alphabetical order. This page shows us Birmingham’s players who are on the transfer list, and the respective asking prices from the club. At this time, it was very much the clubs that had the power over the players, as they decided the Transfer and Retain Lists, and the laws and FA rules were on the side of the clubs.

What are the main features of a footballer’s contract? 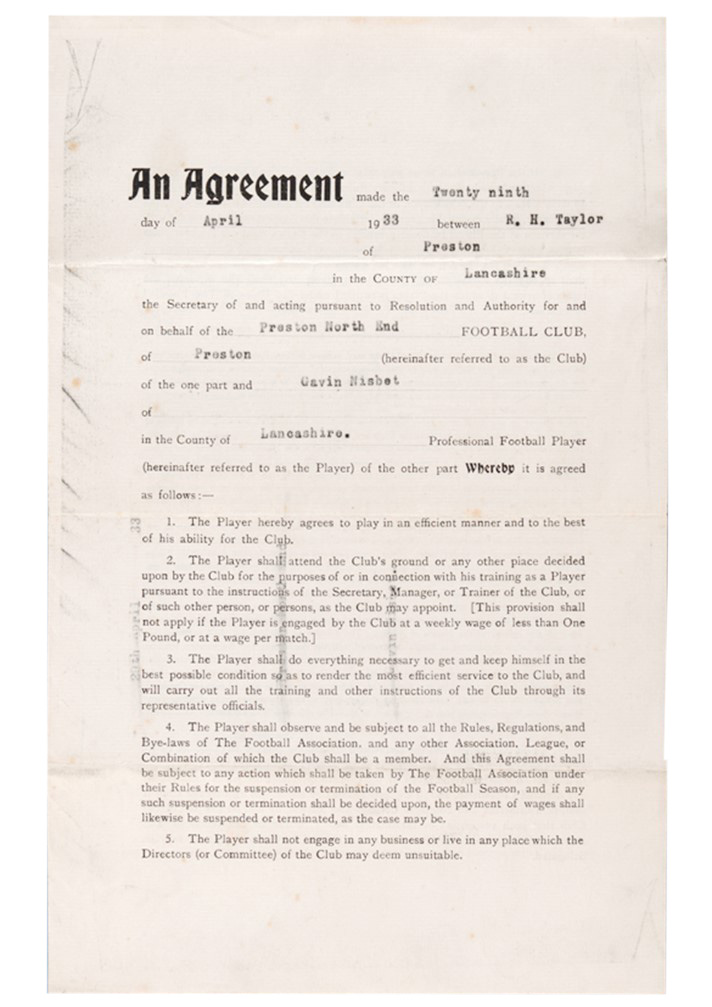 This object from the collections is a player’s contract from 1933 made between Gavin Nisbet and Preston North End. It includes details such as, the player agrees to “play in an efficient manner and to the best of his ability”, something which is still featured in contracts today under the section of “Duties and Obligations of the Player”.

The part that says the player “shall do everything necessary to get and keep himself in the best possible condition”, is worded quite differently in contracts of today — the player agrees “not to indulge in any activity sport or practice which might endanger such fitness or inhibit his mental or physical ability to play practise or train”. This is a sign of how the times have changed, and how they have had to make contracts less general and much more specific over time.

There are many other differences between the contracts from back then and now. Contracts of today will generally incorporate a salary/wages, signing-on-fees, loyalty fees, objectives based on games, image rights ownership, and any other negotiating clauses. For Premier League contracts that are longer than a year, signing-on-fees have to be paid in equal annual instalments. There are often other factors such as bonus payments based on the number of appearances, or agent fees.

Football contracts tend to be for up to five years, but are renewed every couple of years. This renewal system boots wages so that clubs can be sure that their players are happy and will remain with them.

A player is allowed to cancel their contract with their club after three years (if under 28 years old) or two years (if over 28 years old), as long as the club receives adequate compensation for them (‘Protected period’ in the FIFA Transfer Regulations).

Player contracts have evolved over the years, with the bargaining power shifting between the clubs and the players. It has shifted from side to side over that time, but now it rests with the players, something which only becomes more clear as time goes on.

How did footballer’s wages change over the years? 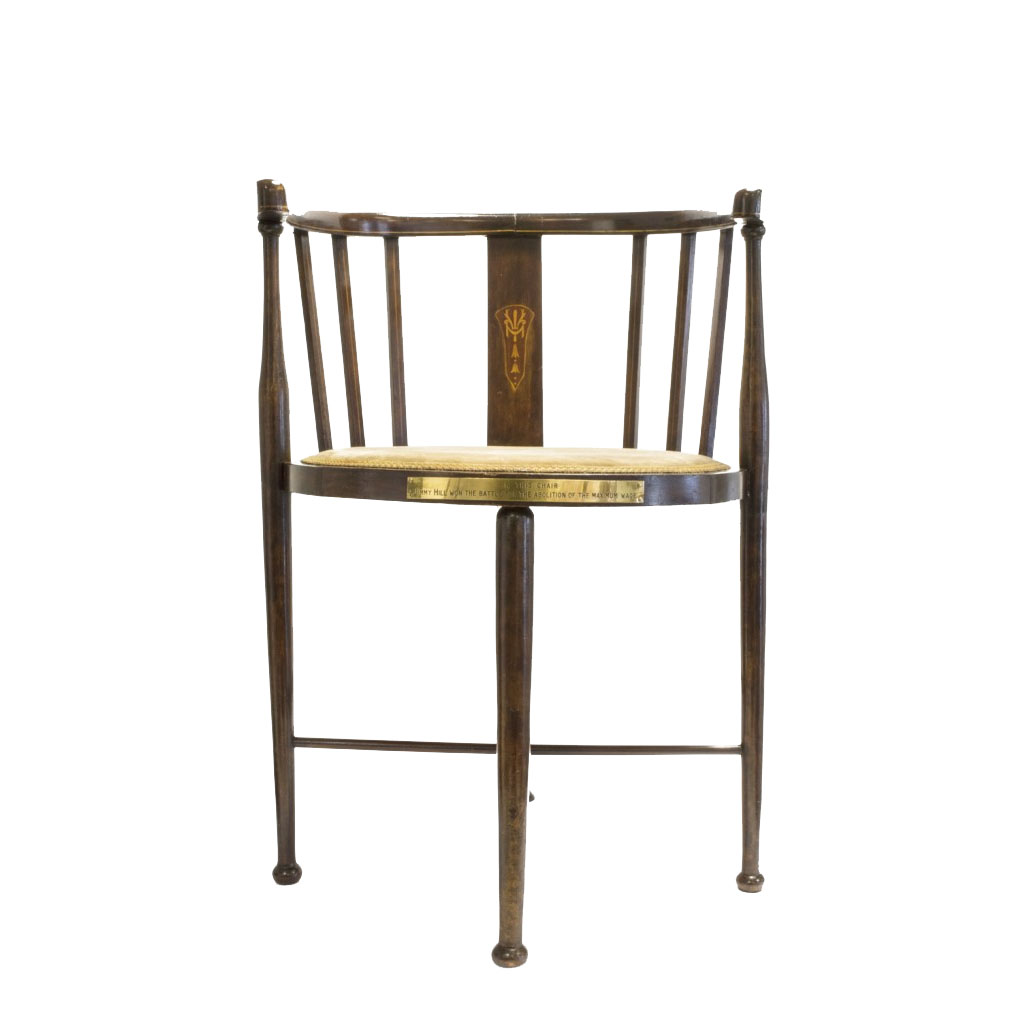 By 1947 the maximum wage had increased to £12 a week, and in 1961, £20 a week. It was at this point that the chairman of the PFA, Jimmy Hill, campaigned for the abolition of the maximum wage, and was successful; he sat in the chair above during the negotiations. This completely changed the finances in football, as well as the power that players had. After the abolition, Scottish striker, Johnny Haynes, took home £100 a week, and became the first ever professional footballer to earn a three figure weekly salary.

In 1977, ‘freedom of contract’ came into play. Players whose contracts were ending and were not being offered anything from their current club could actively pursue a transfer to another club. However, their current club would still retain them after their contract expired and therefore claimed a fee for the player.

The European Union signed a treaty in 1992 which allowed for freedom of labour movement. This created a wage inflation, as players had more bargaining power, but also increased the diversity at clubs all over Europe. It became much more standard for clubs to offer longer-term contracts as they needed some security with the balance shifting in favour of the players.

Wages leapt up to as high as £10,000 a week in 1992, with John Barnes at Liverpool. The Bosman Ruling in 1995 allowed out-of-contract players the chance to secure free transfers. Players who had completed their contracts could leave on a free transfer if their club were not offering them a new deal, and were now free to make their own deal with any club offering without their old club receiving a fee. Many believe that this ruling is one of the most significant events in creating what we now know as football in the present day.

UEFA’s Financial Fair Play regulations in 2009 encouraged clubs to place emphasis on performance-related earnings and bonuses when offering players contracts, in order to minimise their wage bills and avoid any penalties. This way the clubs could stay within their wage limits, as well as creating deals that are appealing to their potential signings.

Despite this, wages have increasingly inflated, and now both Cristiano Ronaldo and Kevin De Bruyne are on a wage of £385,000 per week.

What could this continuous inflation of players’ wages mean for the future of football?

In the early days of football, although a popular sport, it was played for pleasure with very little or no pay. Nowadays, being a footballer is a dream career of riches, like that of a Hollywood actor. Instead of reaching a middle where the players were paid fairly by the clubs and there was an equal amount of power, the script seems to have been completely flipped and we instead have a power imbalance in the other direction.

Barcelona is the key example of what is starting to happen to these clubs. They could burn out and we could arrive at a point where the player power is too much that they leave these clubs in a barren state of mega debt. We may want to look to the more sustainable footballing environment of smaller non-league and grassroots clubs for a future, as with the ‘Big Clubs’, there may not be a future for football.