As England face the USA in a record-selling Wembley friendly, Uma Ghelani looks at an object from a game between the two teams in 1997. 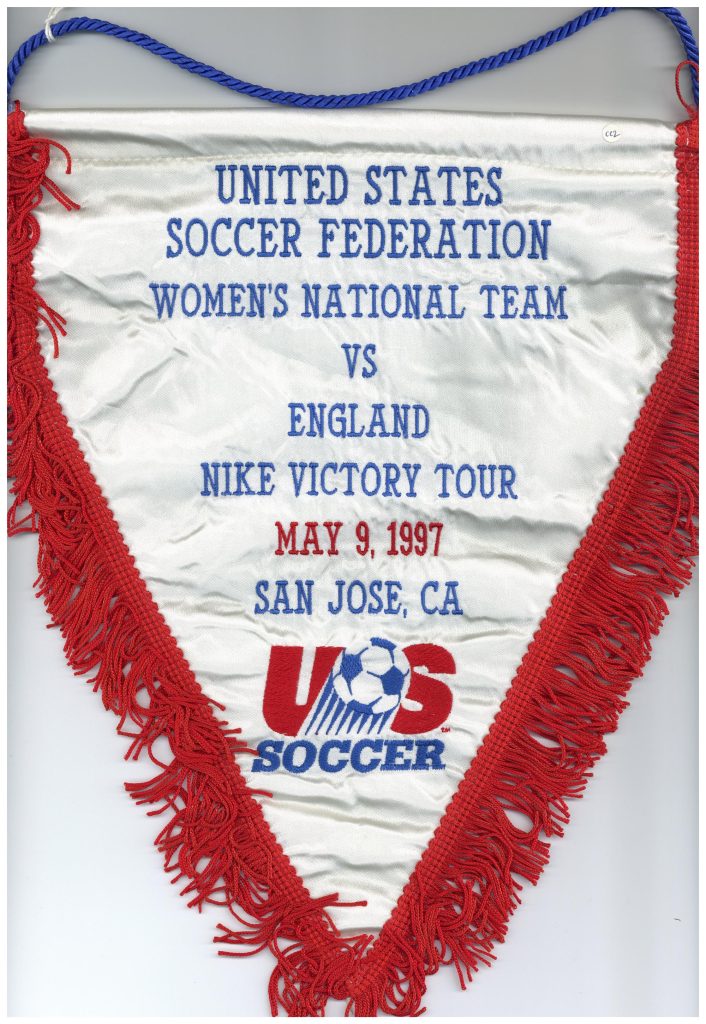 It is a white, red and blue pennant received by England from the USA during the game played on 9th May 1997 in San Jose, California. The Nike Victory Tour was a series of matches that were played to celebrate the USA Women’s football team winning an Olympic gold medal the year before. In true champion fashion, the US team completed their six-game victory tour undefeated. This game between them and the Lionesses was the first ever women’s international match played in Northern California, and attracted a crowd of 17,358.

What happened in the game?

Amazingly, the entire game is actually available to watch on the U.S. Soccer YouTube channel – you can see the full match below. As well as it being a lovely retro television production, there were some really big names playing in this game, such as Mia Hamm, Hope Powell, Kelly Smith and Mo Marley.

There was plenty of exciting action with the USA winning 5-0; Mia Hamm scored a hat-trick, and Shannon MacMillan and Julie Foudy scored the other two. All five goals are impressive, but Mia Hamm’s three goals particularly stand out. The first of Hamm’s goals came at the end of the first half and was a free-kick that she blasted into the net from around 30 yards out, the second a low hit from the edge of the box, and the third from a breakaway where she ran rings around England’s defenders before she hammered it home. As far as hat-tricks go, anyone could only dream of all three goals being as spectacular as these.

What was the legacy of this Victory Tour?

Two years later in 1999, the team continued their victory high and won the World Cup, which they also hosted. Winning this, as well as having won Olympic gold in 1997, the team became the first to simultaneously hold these two titles.

Despite this, there was still no professional women’s football league in the USA. Following the national team’s reigning success in the late 90s and the popularity of women’s football rising, the demand was clearly there. After two failed and folded leagues, the National Women’s Soccer League (NWSL) was finally created in 2012. An important question will always shadow this league: without a relegation and promotion system, can the competition really ever be serious?

Recently there has also been an investigation into the widespread abuse in the league which found that emotional and sexual misconduct has become systemic throughout the NWSL. The players truly deserve better, but with so many failed leagues, will the country ever get there, or will their success remain international?

The USA team went on a five-game Victory Tour after winning the World Cup in 2019 that was inspired by the Victory Tour of 1997. However, some feel that the Victory Tour should be a thing of the past, and that it presents and treats the team as a travelling circus. The 2019 Victory Tour’s matches were crammed into a short break in the NWSL schedule. The tour was seen as a series of ceremonial excursions beating opponents that had no chance in the first place, due to them being underfunded and outclassed. In previous years, the Victory Tour was needed, as there was no professional women’s league in the USA, and the popularity of women’s football needed to be increased in order for there to be a demand for the creation of a league.

The landscape is completely different now. Perhaps the Victory Tour is simply emblematic of how the USA treats its women’s football — just for show.

What can we expect from the upcoming game?

Even since the last time we saw the two teams play each other back in 2019, a lot has changed. In fact, that game was actually when the USA knocked England out of the World Cup (you might remember Alex Morgan’s tea drinking celebration). The popularity of women’s football in England has increased rapidly. A landmark television deal was made to show WSL games on Sky Sports and BBC, and the Women’s European Championship was hosted and won by England — the final at Wembley was attended by a massive 87,192 people, and on television peaked at 17.4 million viewers. The Lionesses became household names this summer, and Ella Toone has even been paparazzied eating a pasty.

The upcoming friendly was the fastest sellout for a women’s game since the general admission opened — 90,000 sold out in less than 15 minutes. Women’s football has been quite transformed in this country. This will be a great game to watch, even if it is only a friendly.

England have won both the Arnold Clark Cup and the Women’s European Championship, and the USA won the CONCACAF Women’s Championship and are the previous winners of the World Cup. With both teams being in a strong position, and the World Cup 2023 in all of our minds, it will surely be an interesting game — and England will be ready for it after the summer they had.