We talk to Jenny Reeves, artistic director of About Time Dance company about a unique dance performance that tells the pioneering story of the Dick Kerr Ladies football team.

It’s 100 years since The Football Association banned women’s football being played on its affiliated grounds. The move effectively banned the women’s game for half a century.

The museum tells the story of the footballers who defied the ban as it opened a new display to the famous Dick Kerr Ladies team this summer.

Now the success and struggle of 1920s football icon Lily Parr and her team is to be told in dance – by About Time Dance Company – at the museum on Thursday 21 October at 4pm. 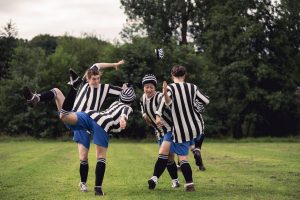 One of football’s first female superstars, Lily Parr scored nearly 1000 goals in a three-decade career. Her team-mates were among the best in the world, regularly attracting massive crowds at home and overseas.

But the men in suits didn’t like the fact the women’s game was more popular than the men’s – so they banned it.

Titled “Quite unfit for females” – a line used by the powers-that-be to crush the women’s game in 1921, the production involves a cast of five dancers, mirroring the movements of Lily and her pals from yesteryear.

On the eve of the performance, we chat to Jenny Reeves about the importance of this show.

What does this particular performance mean to you?

Quite Unfit for Females is important to me as it not only has the largest cast of any show I’ve made, it tells the story of real women, and each player is performed by a dancer and the characters of the women are portrayed in depth.

I felt really responsible to tell this story accurately and carefully and to do their story justice. I feel it’s really important that we recognise the efforts of the players during the war especially with their work in munitions factories and as nurses and also tell more widely the injustice of the ban on women’s football. 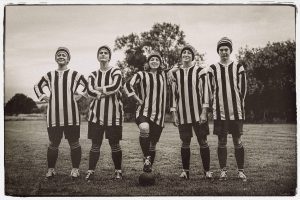 The cast. Photo by Robin Zahler

How much are the performers aware of the Dick Kerr Ladies story?

We all undertook a great deal of research around the Dick Kerr Ladies and continue to do so today to develop characters. As part of the application process I asked the dancers to research the story and to explain why they were interested in being a part of the performance.

How symbolic is it for About Time Dance to take this show on the road in 2021?

It’s brilliant that this dream is at last a reality and the show exists.

Last year was a difficult time for the arts industry but when we premiered the show in September we had some brilliant feedback, lots of which were local people who recognised the munitions factories or the Dick Kerr Ladies kit and they definitely had a sense of local pride.

Of course, it’s also close to exact 100 year anniversary of the FA ban on women’s football – so it’s poignant. 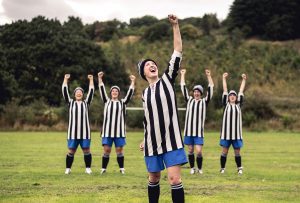 What will it feel like to perform it at the National Football Museum, just yards from a statue of Lily Parr?

We’re really excited to perform at the museum.

We came here in the early days for some research and had a look around the exhibition which we found hugely inspiring and were super excited to share it with a young audience too and get their feedback.

We’ll definitely be getting a photo in our kits with Lily.

See About Time Dance perform “Quite Unfit for Females” at the National Football Museum on Thursday 21 October at 4pm.