Exactly a century ago struggling striking miners received support from an unlikely source – women footballers. Catriona Kelly looks at these remarkable players who played for, and supported their communities. 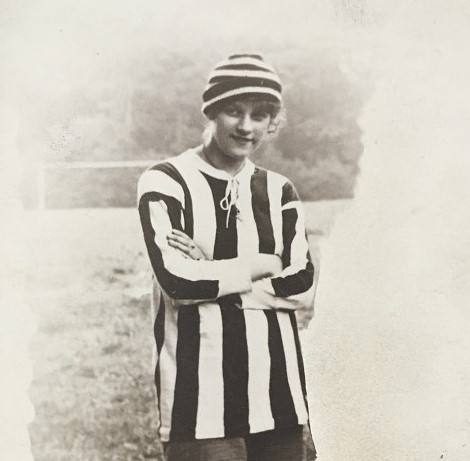 In the early twentieth century, women’s football was synonymous with charity.

During the First World War, women’s teams consisting of munitions, textiles and other factory workers sprung up across Britain to play in football matches with the money from tickets being donated to the war effort.

Considering that crowds turned up in their thousands on many occasions to watch women’s football, these games were incredibly popular and resulted in impressive sums being raised.

For example, the Dick, Kerr Ladies win of 4 – 0 against Arundel Courthard Foundry on Christmas Day 1917, which had over 10,000 spectators, accumulated a donation of £200 for a military hospital. This sum would be worth £13,966 today.

Dick, Kerr Ladies were led at that time by captain Alice Kell (pictured above).

After the war, teams such as Dick, Kerr Ladies and St Helens Ladies’ AFC (reformed from Sutton Glass Works) continued to play and, in most cases, continued to attract large crowds to their games.  In the years to follow, women’s football would again be utilised to raise funds for charity however, this aid would be on a far more local level than the war effort.

During the First World War, like munitions, the manufacture of coal was imperative, and the industry was nationalised in the early stages of the war effort.  Focus turned to maximum output resulting in wage inflation and by 1920, the coal industry was hugely struggling as demand had fallen drastically post-war.

As the government sought to return mines to private ownership, disputes between the Miners’ Federation and the Mines Association (coal owners’ representative) arose surrounding pay and a National Strike took place between 16-28 October 1920.

Agreement was reached and a scheme was to be settled and presented on 31 March 1921 – the day in which the mine industry would be reprivatised.  Coal owners made clear their intention to reduce wages and as control was handed back from the government on 1 April 1921, the miners withdrew their labour and declared themselves locked out.

Agreement was not reached until 29 June 1921, during which time living conditions in the mining communities became almost impossible as the industry attempted to starve the miners back to work.

Women’s football again became a huge source of aid with money raised from games being donated to local distress relief and soup kitchens set up to support the mining community.

There are significant reports of teams such as Silksworth in Durham, Barrington in Northumberland and Bentley Ladies in South Yorkshire participating in fundraising matches for those affected by the lockout.

The Dick, Kerr Ladies, Lancashire’s most famous team, also contributed to local causes as well as playing matches in mining areas such as Cardiff, Swansea and Kilmarnock.

The involvement in women in the Miners’ Lockout 1921 was not well received by the Football Association who were already deeply concerned with the popularity of the women’s game.

Indeed, in December that year, the FA would announce their ban on women playing football in FA grounds.

Many consider the charitable role of women’s football during a national political movement to have been the last straw for the FA.

*Author of this piece – Catriona Kelly – is a Museum Studies student at Leicester University who has been on placement with the National Football Museum.