“While women’s football is rapidly developing, it still suffers a chronic lack of infrastructure and investment” Calendar

It’s been six years since a tiny disposable camera travelled four thousand miles from Sierra Leone to Goal Click’s London base. It contained photos of the Single Leg Amputee Sports Association football team playing out their football dreams on a beach.

Goal Click sends analogue cameras to people around the globe so they can capture the game as they see it. The images of players not letting crutches and conflict stand in their way were powerful photographs that set the Goal Click story underway.

In 2019 women footballers were given disposable cameras and asked to document their journeys to the FIFA Women’s World Cup. The images went on show at the National Football Museum early 2020.

We asked Matthew Barrett, founder of Goal Click, about the photographic odyssey, the 2019 images of women’s football and what the next chapter is…. 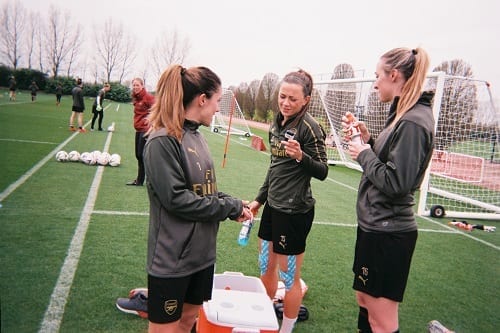 What is Goal Click and how did it start?

Goal Click is a global football storytelling project. It finds inspirational people from all over the world and asks them to tell stories about their football lives, their community and their country – all initially using disposable analogue cameras and their own words.

We give people the chance to tell their own story and show what football means to them. Rather than an “outsider” coming in to tell their stories, we focus on the “insider” view, by giving people the power, control, and freedom to create and tell the world the story of their own lives through football.

At its heart lies a mission to find the most compelling stories; from civil war amputees in Sierra Leone and local fan rivalries in Argentina, to refugees in Jordan and women’s teams in India and Pakistan, all the way up to players with the US Women’s National Team such as Sam Mewis and Kelley O’Hara.

Goal Click started in 2014, with the slightly crazy idea to find storytellers from every country in the world to do the project. We wanted to help people understand the world and each other through the common language of football. There were so many incredible people and stories from around the world that are simply not being heard.

We received our first disposable camera back from Sierra Leone in August 2014 – from Pastor Abraham Bangura, a church minister and the manager of the national amputee football association, SLASA.

After that, we found stories from people in countries like India, Iraq, Peru, Russia, Rwanda, Mexico, Australia – and soon we were collaborating with individuals and partners in over 100 countries.

What response did you get from the players involved in the World Cup?

Ahead of the 2019 Women’s World Cup, we saw a huge opportunity to tell a wider story about the state of global women’s football – all from the perspective of the players themselves. We wanted to have players from all levels of the game, but in particular we aimed to find women who would be playing at the World Cup – in the end we collaborated with 18 Women’s World Cup stars representing 14 national teams, from Sam Mewis and Kelley O’Hara of the US Women’s National Team to Beth Mead (England), Lauren Silver (Jamaica) and Miranda Nild (Thailand). 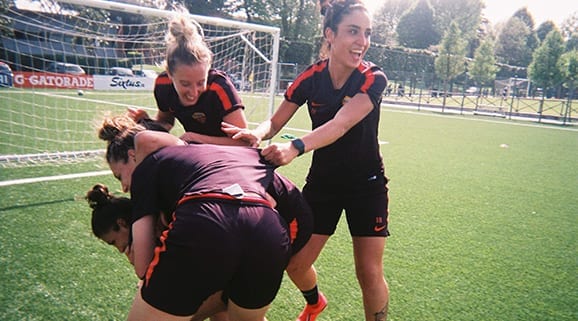 The response was amazing, and we were so pleased to be able to collaborate with some incredible and high profile women’s players – all with great personal stories. And the response was even better when they saw the results and the photos were published, with global media coverage.

Most players were keen to participate because it was credible, fun, and different. Goal Click already had a five-year history of telling stories from around the world in a trustworthy, imaginative and responsible way, so our previous work helped bring our idea to life for the players.

Using a disposable analogue camera is a really fun and slightly unusual idea, and this attracted many players. Quite a few of the players are photographers in their spare time, and many others had good memories of using these cameras when they were younger. It felt like a fresh and unique approach for telling their stories ahead of the tournament. Often the players themselves would then tell their teammates and we would get more players wanting to take part.

What is your favourite image and why?

The image that stood out immediately is the photo Sam Mewis took of her USWNT teammates Rose Lavelle and Alex Morgan, in an ice bath during the USWNT training camp in San Jose before the Women’s World Cup.

It is a wonderful and unusual image from a purely aesthetic point of view, but the meaning of the photo gives it real power. I believe it could only have been taken by a trusted teammates and friend who could get close to these global superstars, giving it a very natural and authentic feeling.

It demonstrates the true bonds that develop between players on the journey to the World Cup. As Sam herself says, “this picture captured this idea that Rose and I have developed a relationship with Alex that is more than just teammates. She’s become our friend and we share so many little moments with her, like taking ice baths and suffering through the cold. I have so much respect for the veterans on the team, like Alex, and even more respect for the way they have accepted the new players and crafted real relationships with us.”

What do the images say about the women’s game?

There were definitely some common themes from the images and stories. There is an incredible sense of friendship between players in the women’s game. Many of the players truly found their friends for life through playing football. This kind of spirit amongst teammates is not found to the same extent in the men’s game.

Sadly there were so many stories of players facing huge barriers and discrimination growing up – not being allowed to play, being told girls could not play football, or having no opportunities to join a team. The common thread for success seems to be a supportive family (both fathers and mothers). And almost every player started off by playing with boys, either locally or in their family.

While the game is rapidly developing, particularly in Europe and North America, women’s football still suffers from a chronic lack of infrastructure and investment. Many players described their lives as not being as glamorous as some may think.

There is also a clear gulf between the best women’s teams and all sides just below the very elite level in terms of resources, both at club and international level. The US Women’s National Team is probably closer in this respect to the US Men’s team than it is to the Thai or Jamaican women’s teams. So there are issues of inequality both between the men’s and women’s game, and also within the women’s game.

Despite the impact of COVID-19, this summer we have launched our new series in partnership with UNHCR, the UN Refugee Agency, based on refugee football storytelling. Over the past three years we have been collaborating with refugees and asylum seekers around the world to document their personal stories and experiences through football in refugee settlements, urban situations, and host communities.

In normal times we would always be looking for new partners. In 2019 we created original series with the likes of FIFA, UEFA, Qatar 2022, New York City FC, and the Homeless World Cup. Many of our new partnerships and potential series are understandably on hold for now. The near-total shutdown of football around the world has obviously affected our work, but we aim to be ready to tell stories around the resumption of football.

The next big evolution for Goal Click (in later 2020 and beyond) will be into the world of podcasts, short films, and storytelling events…so watch this space.

Find out more about the exhibition.