50 years on from England’s iconic World Cup, the National Football Museum have worked with The FA to bring the glorious summer of ’66 back to life.

In this online exhibition we look at the Boys of 66 who contributed so much to help England lift the Jules Rimet trophy on 30 July 1966.

The exhibition has been made possible thanks to a £302,500 Heritage Lottery Fund (HLF) grant. 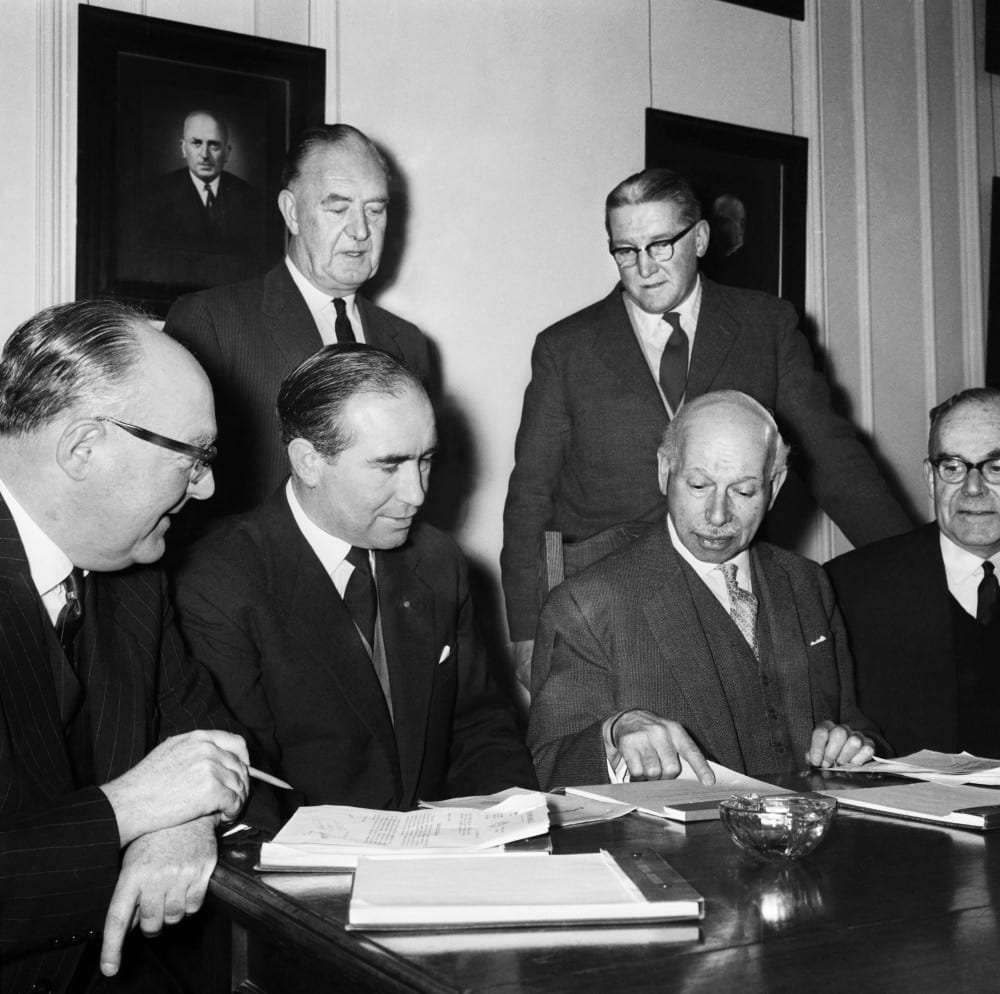 Ramsey meets with the FA’s International Selection Committee, 5 February 1963, to select the England team to face France later that month. Ramsey would take complete control of squad selection from this point on.

Alf Ramsey was viewed by many as England’s first ‘proper’ manager; taking over squad selection previously overseen by committee. Previously manager of Ipswich Town, he guided them from Third Division South obscurity to Division One champions.

“I think England will win the World Cup. We have the ability, strength, character and perhaps above all the players with the right temperament. ”

In April 1966 Ramsey’s men won 4-3 against Scotland at Hampden Park to clinch the British Home Championship and show the world why they were one of the pre-tournament favourites. 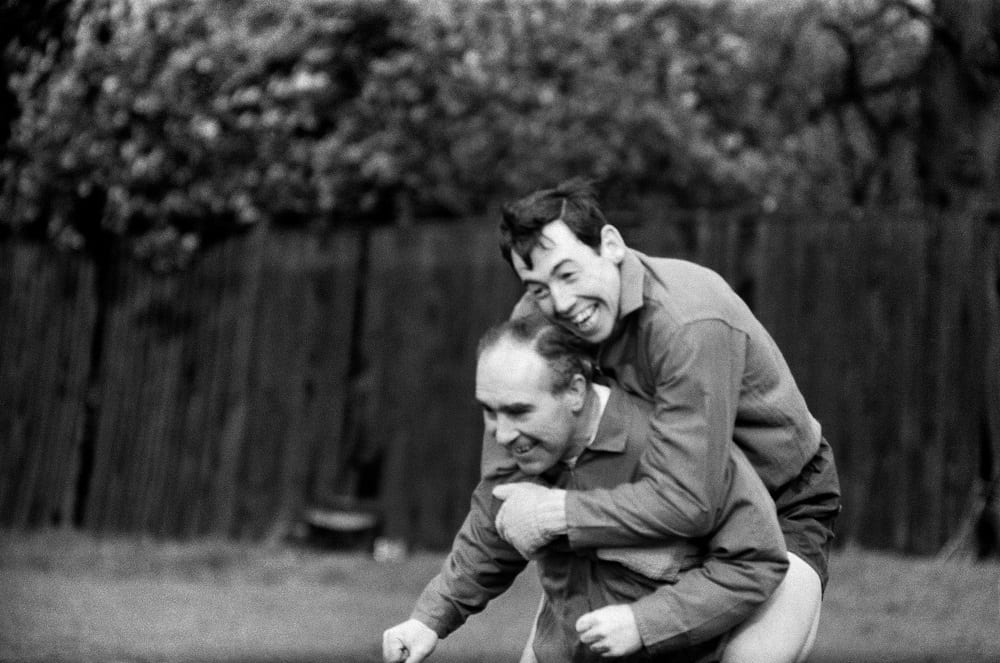 Ramsey gives a lift to Banks during a training session, July 1966.

In a glittering nine year stint as England’s number one, Gordon Banks established himself as the world’s greatest goalkeeper.  Banks didn’t concede a goal from open play enroute to the 1966 World Cup final, winning keeper of the tournament. Making almost 500 appearances for Leicester City and Stoke City, he was named FIFA’s goalkeeper of the year on six occasions.

“The best of his era and, possibly in history…no goalkeeper can ever have worked harder at his trade. ”

George Cohen (second right) celebrates with the crowds at the Royal Garden Hotel during the official World Cup Banquet, 30 July 1966.

Quick, mobile and ever willing to support in attack, George Cohen’s overlapping runs down the flank were a constant threat to opposition defences. Cohen replaced Blackpool’s Jimmy Armfield as England’s first choice right back in 1964 and through sheer determination never looked back. A one-club man, Cohen made over 450 appearances for Fulham.

“The best full back I ever played against. ” 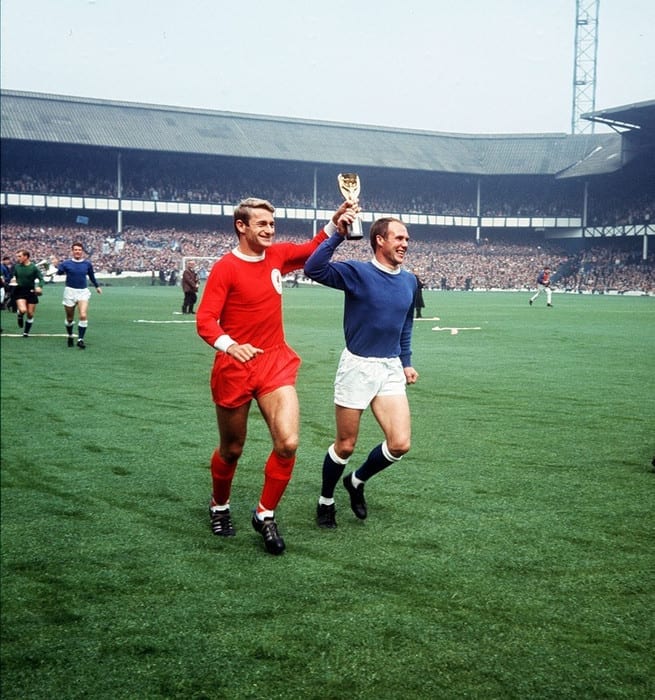 Ray Wilson was the oldest member of the World Cup team with vast international experience behind him going into the competition. A precise tackler with fantastic distribution, Wilson loved to attack and rarely made a mistake. A string of excellent performances saw him rated the best left-back in the tournament by foreign football writers.

“He was the complete full-back, a man who could attack and defend with equal competence. ” 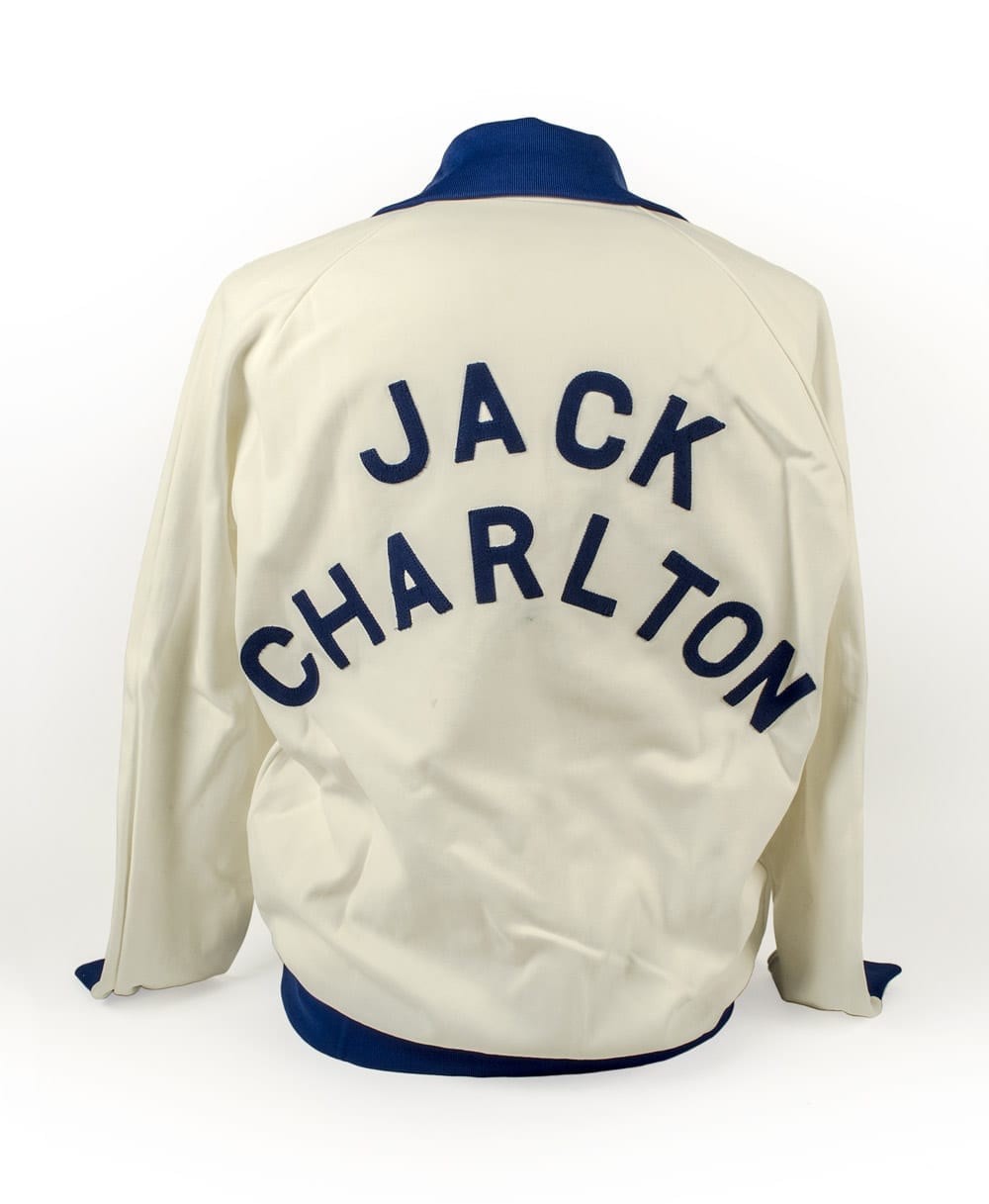 A competitive, no-nonsense central defender, Jack Charlton was a late developer who didn’t make his England debut until just before his 30th birthday. The ideal partner for the stylish Bobby Moore, Charlton put his body on the line and covered Moore whenever he ventured upfield. A one-club man, Charlton made a club record 629 league appearances for Leeds United.

“His positional sense was brilliant…he was magnificently dominant in the air, at both ends of the pitch. No one was more influential in keeping people around him completely focused. ” 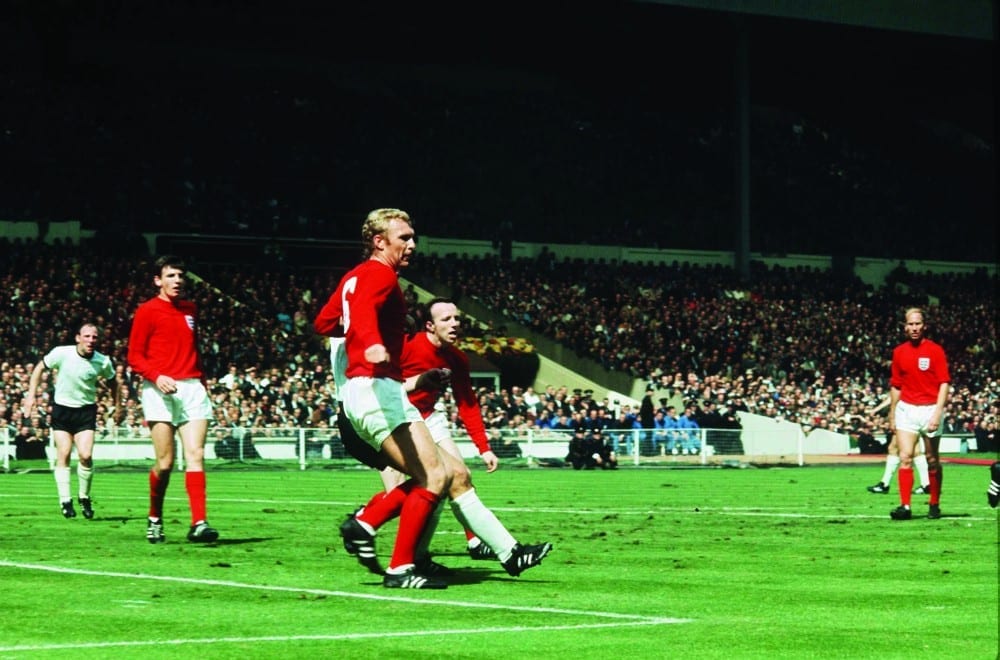 Bobby Moore was a leader on the pitch and an inspiration to others. Ramsey made him his captain at just 22 and the composed central defender went on to lead his country 90 times. Bobby made 544 appearances for West Ham United and was voted Footballer of the Year in 1964 and BBC Sport Personality of the Year in 1966.

“My captain, my leader, my right hand man. Without him England would never have won the World Cup. ” 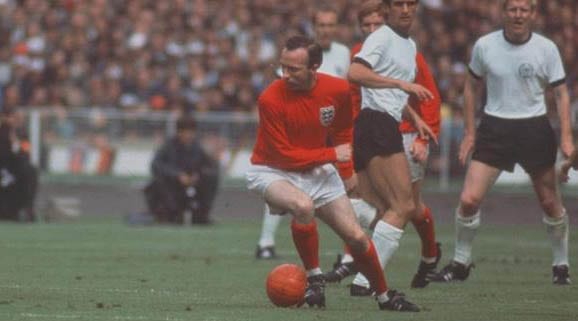 Stiles controls possession for England during the 1966 World Cup final.

Nobby Stiles was a brick wall in the England midfield, his desire to win was one of the key elements that helped lead England to victory.

His tireless running and persistent tackling alongside another young, energetic midfielder in Alan Ball, gave licence to Ramsey’s full backs to get forward and attacking talents to express themselves.

“I don’t know of any forward who can look forward to playing against Nobby Stiles. ”

Bobby Charlton was England’s primary inspiration, combining great skill and awareness with grace and elegance. After the Munich Air Disaster, Manchester United manager Matt Busby rebuilt his new team around him. From his deep-lying midfield position, Charlton was the lynchpin of the England attack. His sportsmanship and work ethic were as famous as his thunderbolt of a shot.

“There has never been a more popular footballer. He was as near perfection as man and player as it is possible to be. ” 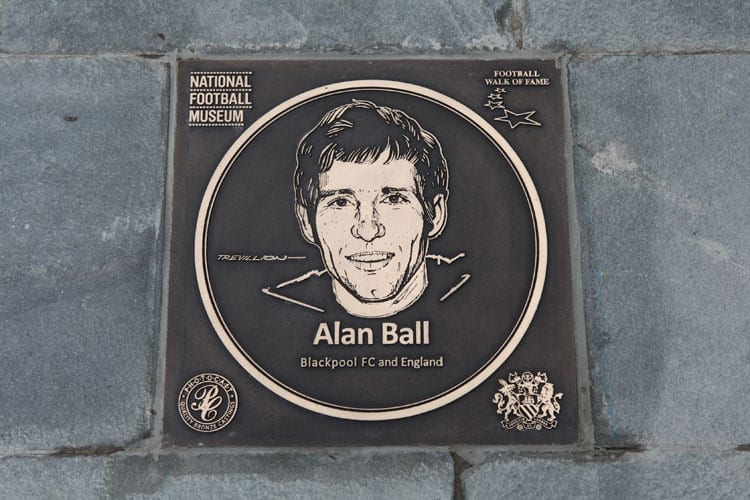 Dynamic midfielder Alan Ball was the youngest member of the 1966 side. High in energy with incredible stamina, Ball’s key responsibility was to protect right-back George Cohen and break forward in wide positions in support of the attack. A month after the World Cup he left Blackpool to join Everton for a British transfer record fee of £112,000.

“His energy observed no natural law. The more he expended, the more he appeared to have. ” 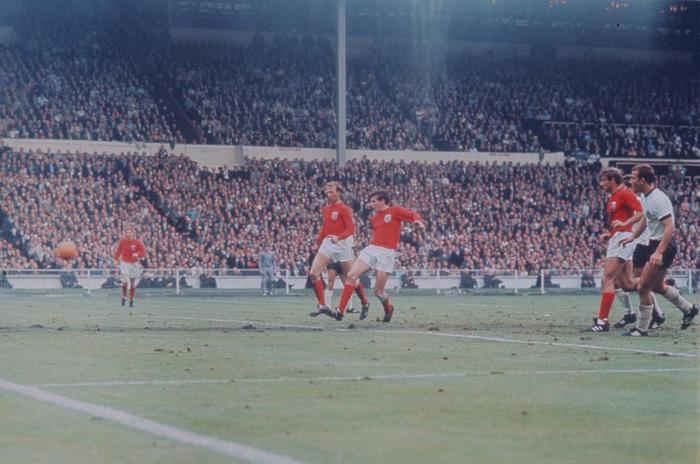 Stylish midfielder Martin Peters was described by Ramsey as ‘a player ten years ahead of this time’. Handed his debut just weeks before the tournament, Peters seized the opportunity. Renowned for his supreme versatility, off-the-ball running, and clever one-touch passing, he would often ghost into forward positions to get on the end of crosses.

“People didn’t notice him because he played so many perfect first-time balls – the kind of passes that others would deliver after taking a touch. ”

Roger Hunt appeals to the referee before England's third goal was given against West Germany.

Forward Roger Hunt worked tirelessly for his country in 1966. Hunt modified his natural out-and-out goal scoring instincts to assume the role of selfless runner, creating space for others to exploit. His intelligent running and sublime movement, combined with a refusal to shirk responsibility made him indispensable to Ramsey’s side.

“You could make huge plans around him, and he was greatly missed when he wasn't there. ” 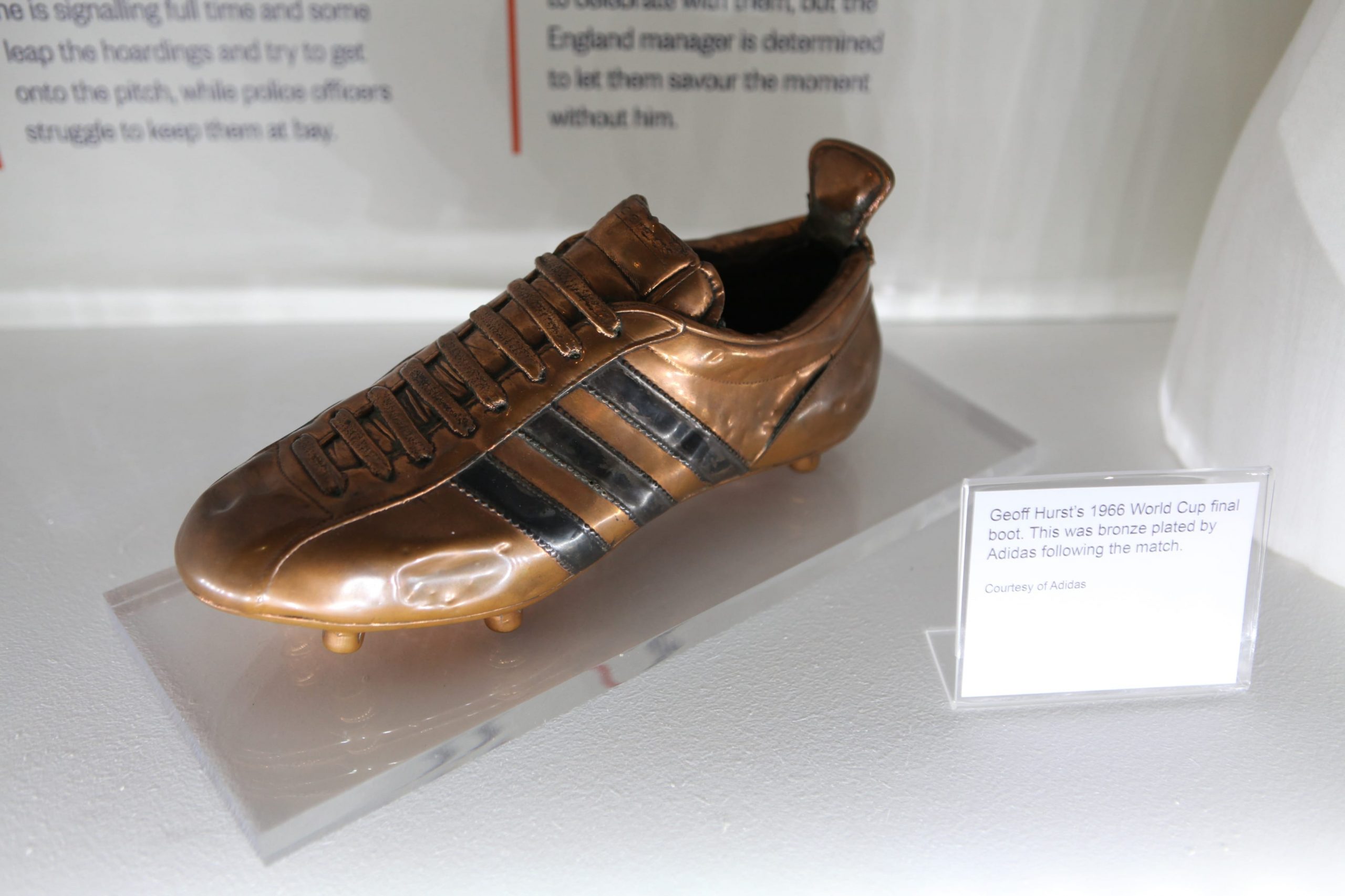 Geoff Hurst's boot from the 1966 World Cup final. After the game the boot was bronze plated by Adidas.

Iconic forward Geoff Hurst remains the only player to score a hat-trick in a World Cup final. Hurst started his career as a midfielder, until West Ham manager Ron Greenwood chose to switch him to attack in 1962.
The original target man, his movement, strength and ability to lay the ball off created space and width for others to exploit.

“Brave as they come: the strength of his running and his ability to drag defenders out of position are phenomenal. ”

Jimmy Greaves lies in a bath with his bandaged leg rested up on a chair following a bad tackle he received during the England v France group game.

A shin injury against France meant he would watch the rest of the tournament from the sidelines.  Greaves racked up 44 goals in 57 games and the six hat-tricks he scored still stand as an England record.

“Jimmy was one of the geniuses of soccer at scoring goals. There’s no doubt that if he hadn’t been injured he’d have played in a World Cup final. ” 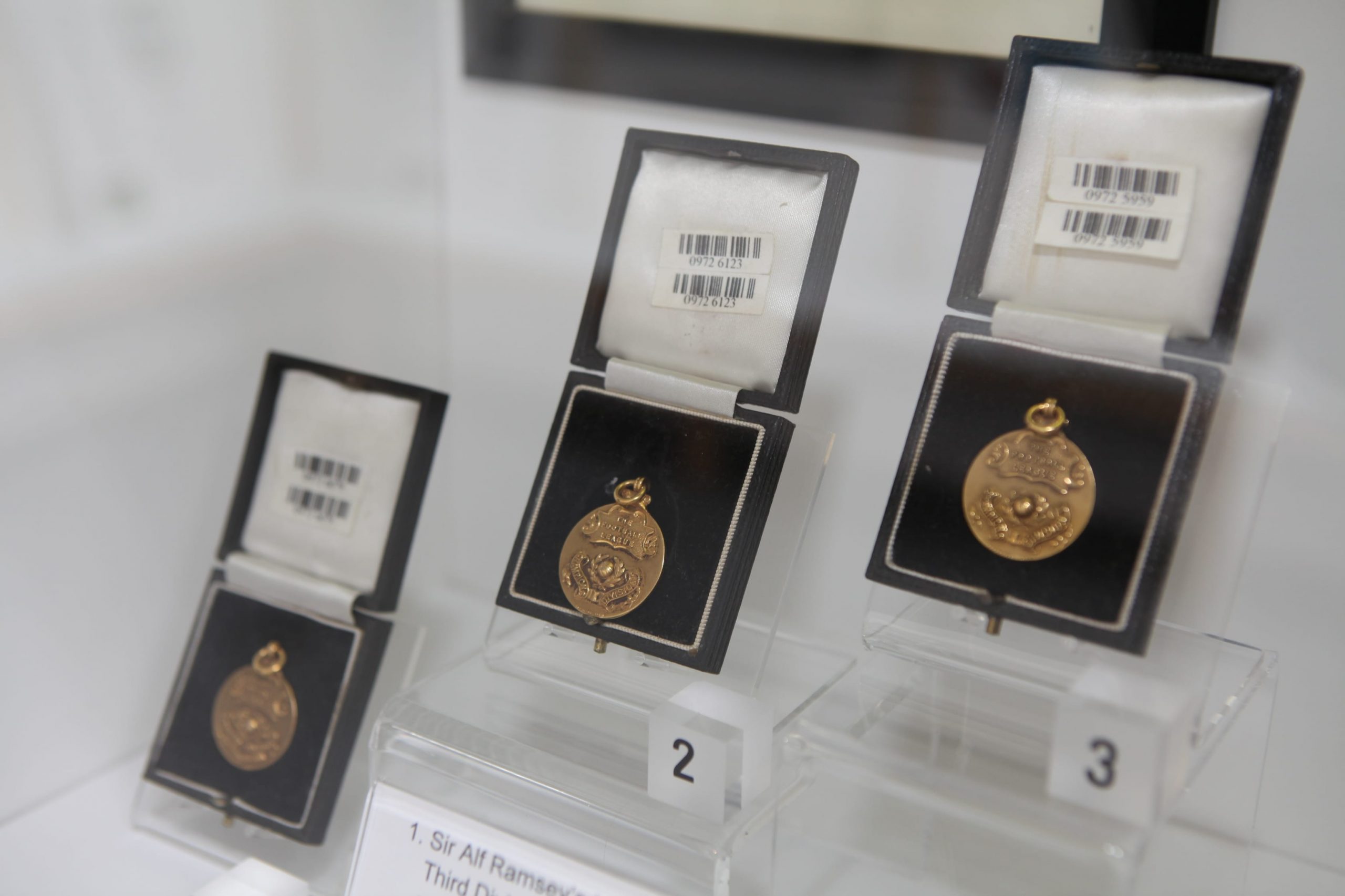 Born on 22 January 1920 in Dagenham, Ramsey was a reliable right-back for Southampton and Tottenham Hotspur, captaining England three times during his 32 international appearances.

Ramsey’s modern tactical approach was complimented by a strictness that emphasised physical fitness and demanded high standards of performance and reliability.

“The most powerful man I’ve come across in footballing business. When he said something you jumped. ”