As part of the National Football Museum’s project to unlock the hidden history of women’s football we have been cataloguing and digitising the personal photography of collector, Chris Unger. These snap shots come from two of England’s Group B matches from their debut at the second official FIFA Women’s World Cup, hosted by Sweden between 5th and 18th June 1995.

This online exhibition has been put together by Thomas Mallinson, a volunteer at National Football Museum, as part of his work placement module that forms part of his MA in Art Gallery and Museum Studies at Manchester University. 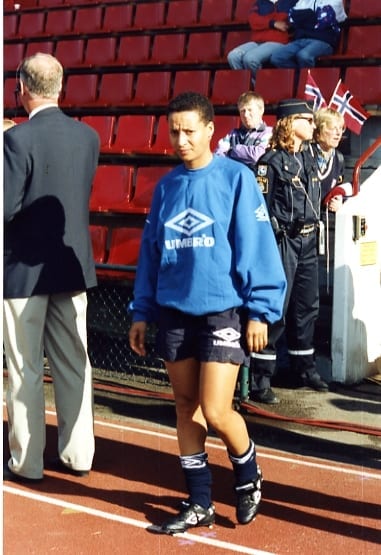 One of the most recognisable players and trailblazers of the modern English game and future national team manager. England No.2, midfielder, Hope Powell takes to the field at Tingvalla Stadium, Karlstad in the pre-match warm up in preparation for their second Group B match against Norway. 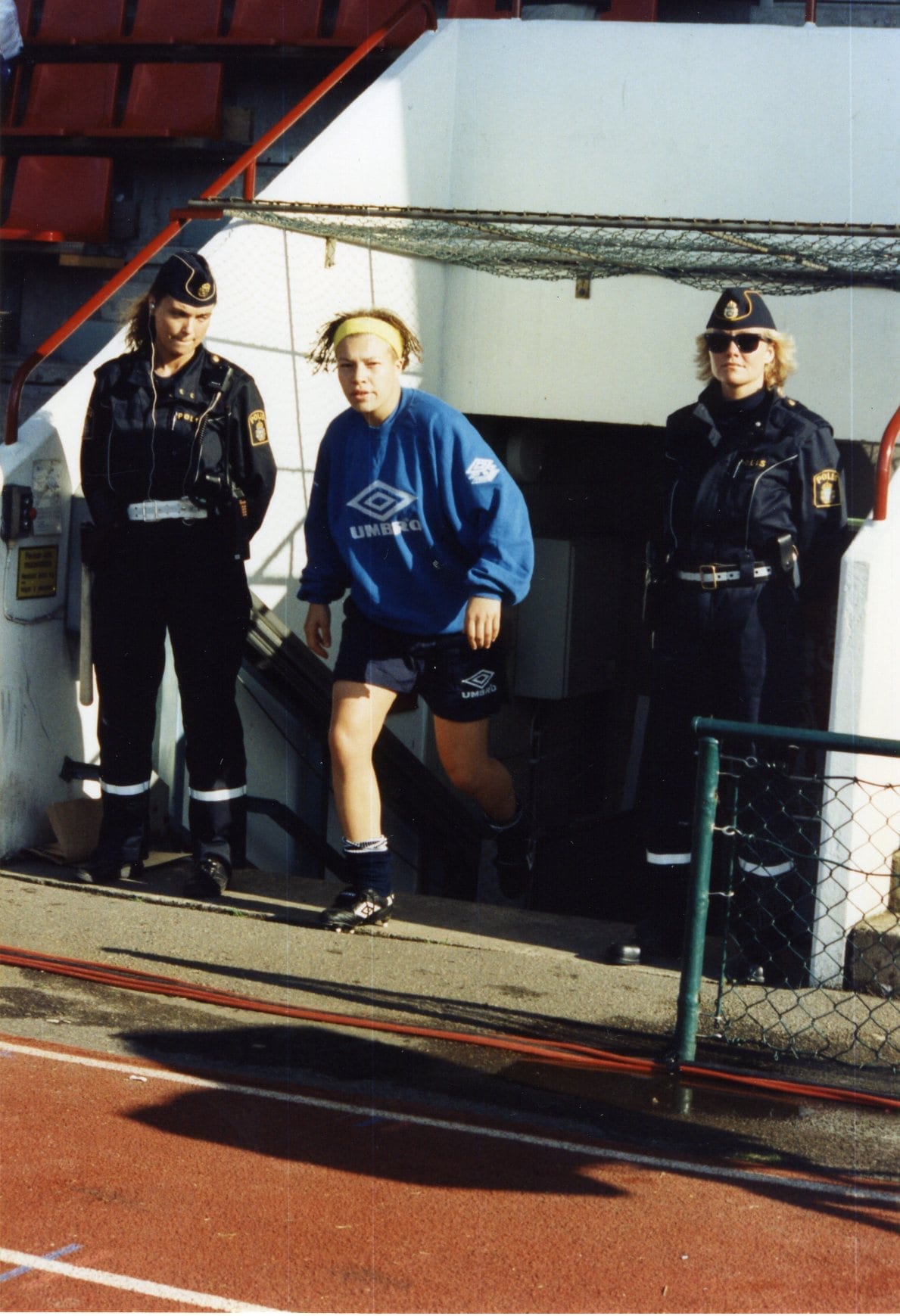 England No.4, defender, Samantha Britton joins her teammates in the pre-match warm up. Britton was a versatile player and through her football career would play in defence, midfield and as a forward. 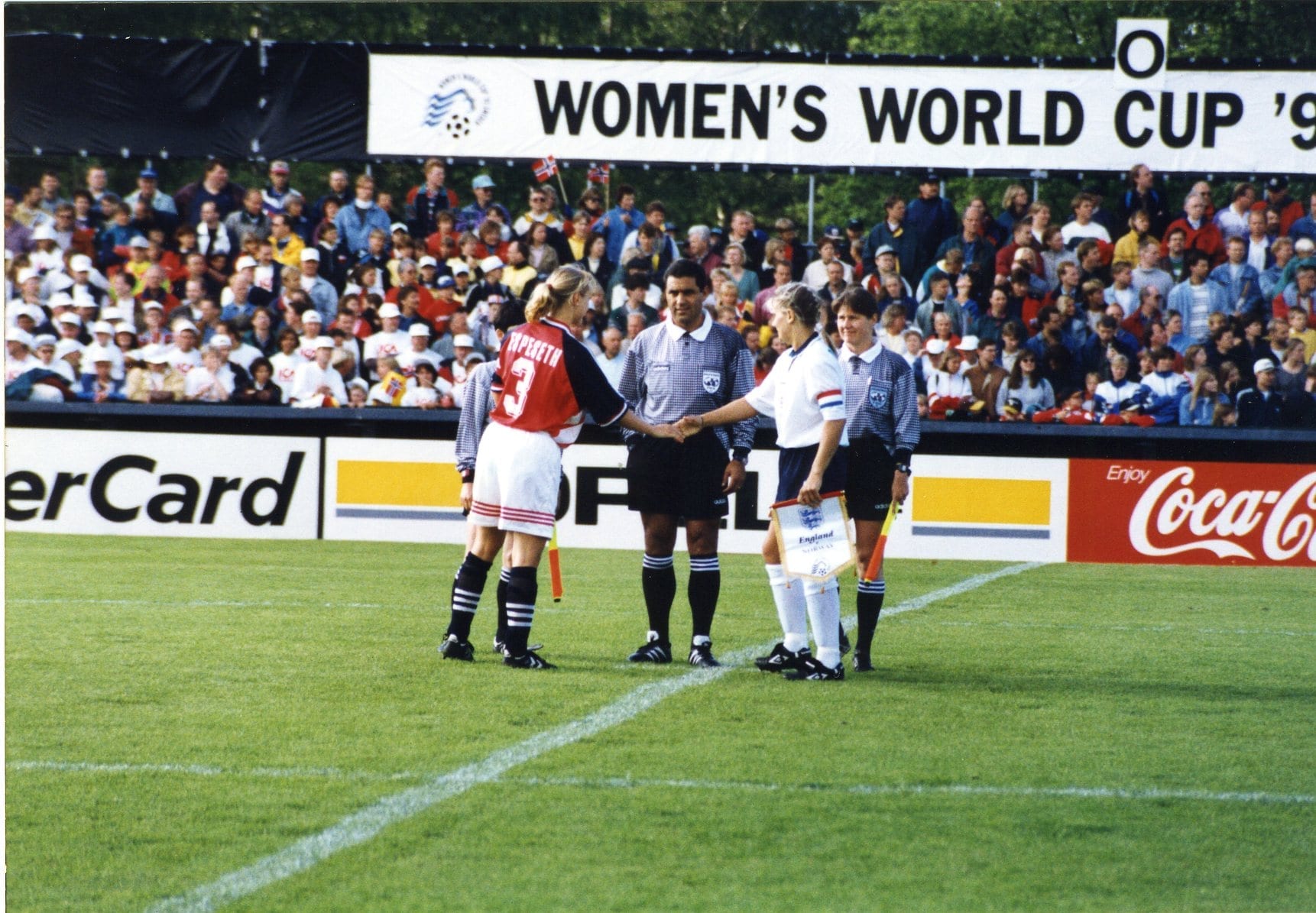 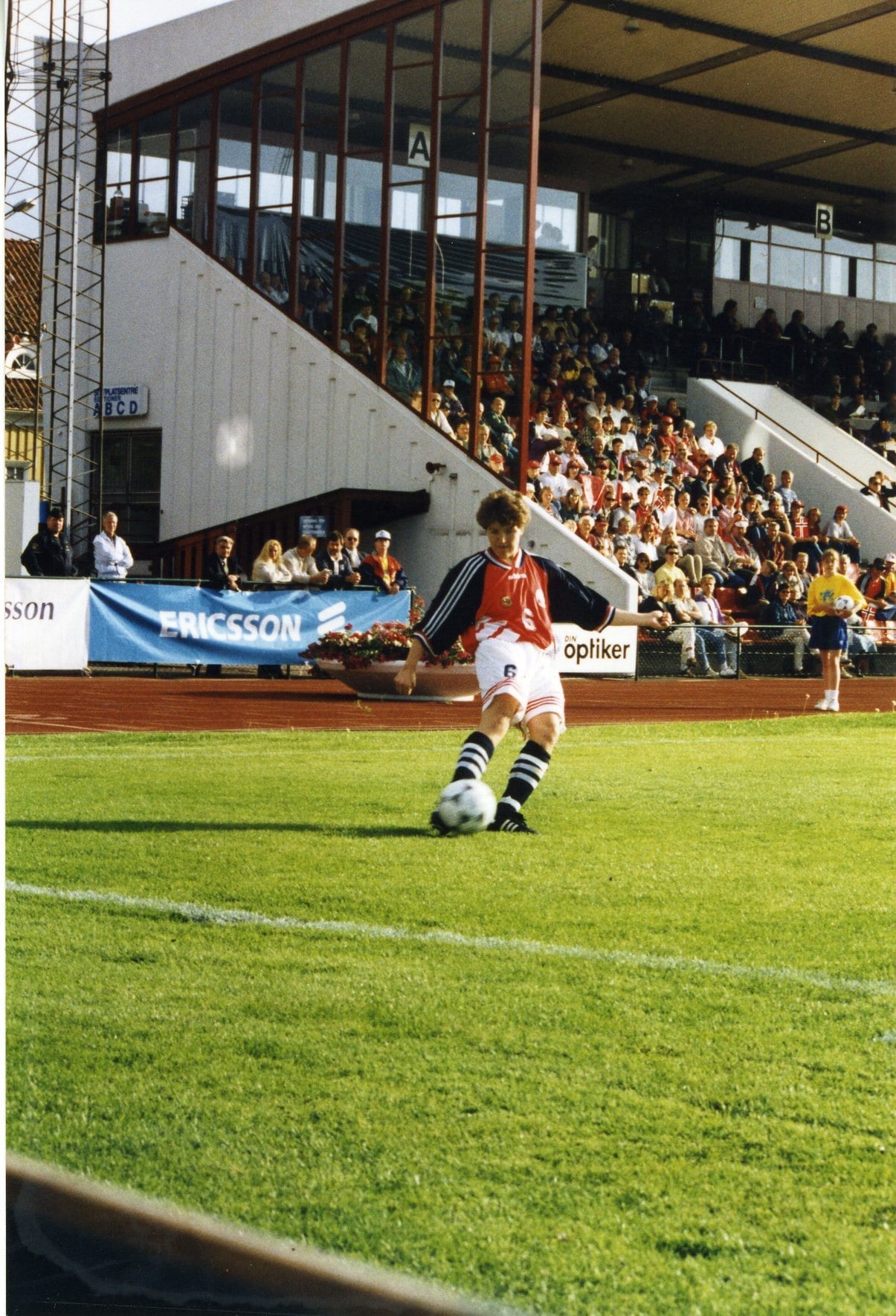 Norway No.6, midfielder, Hege Riise on the ball. Riise would strike in the 37th minute of the game to put Norway 2-0 up. By the end of the tournament Riise would be one of the top goal scorers having scored five goals throughout the competition. This would put her ahead of team mate Kristen Sandberg, who scored three, and below another teammate Ann Kristen Aarones, who would score a total of six goals. 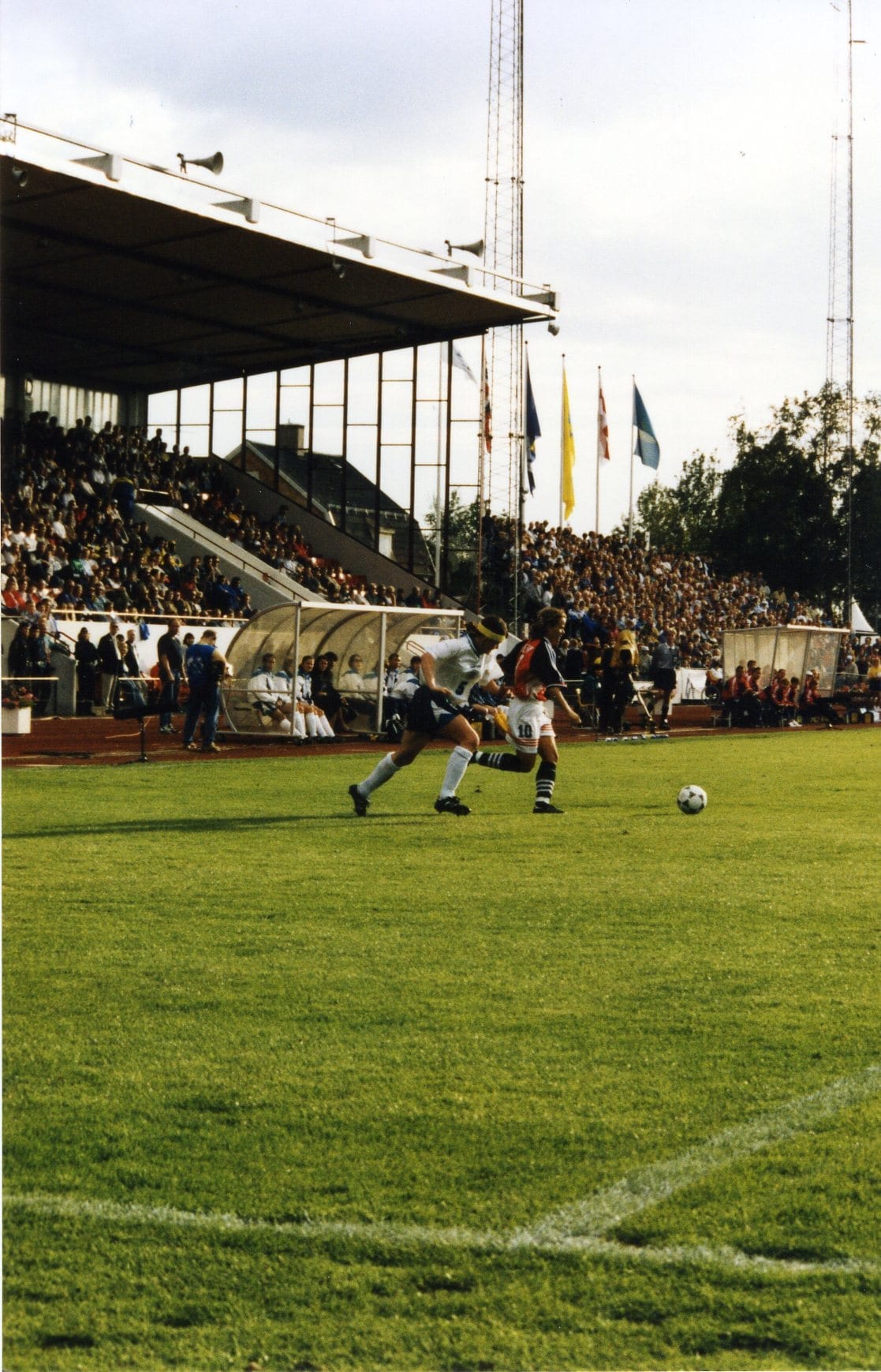 England No.5, defender, Clare Taylor closing in on Norway No.10, forward, Linda Medalen. Taylor was not only a talented footballer but also a successful cricketer. Two years before the 1995 World Cup, Taylor was part of the England cricket team that won the 1993 World Cup. 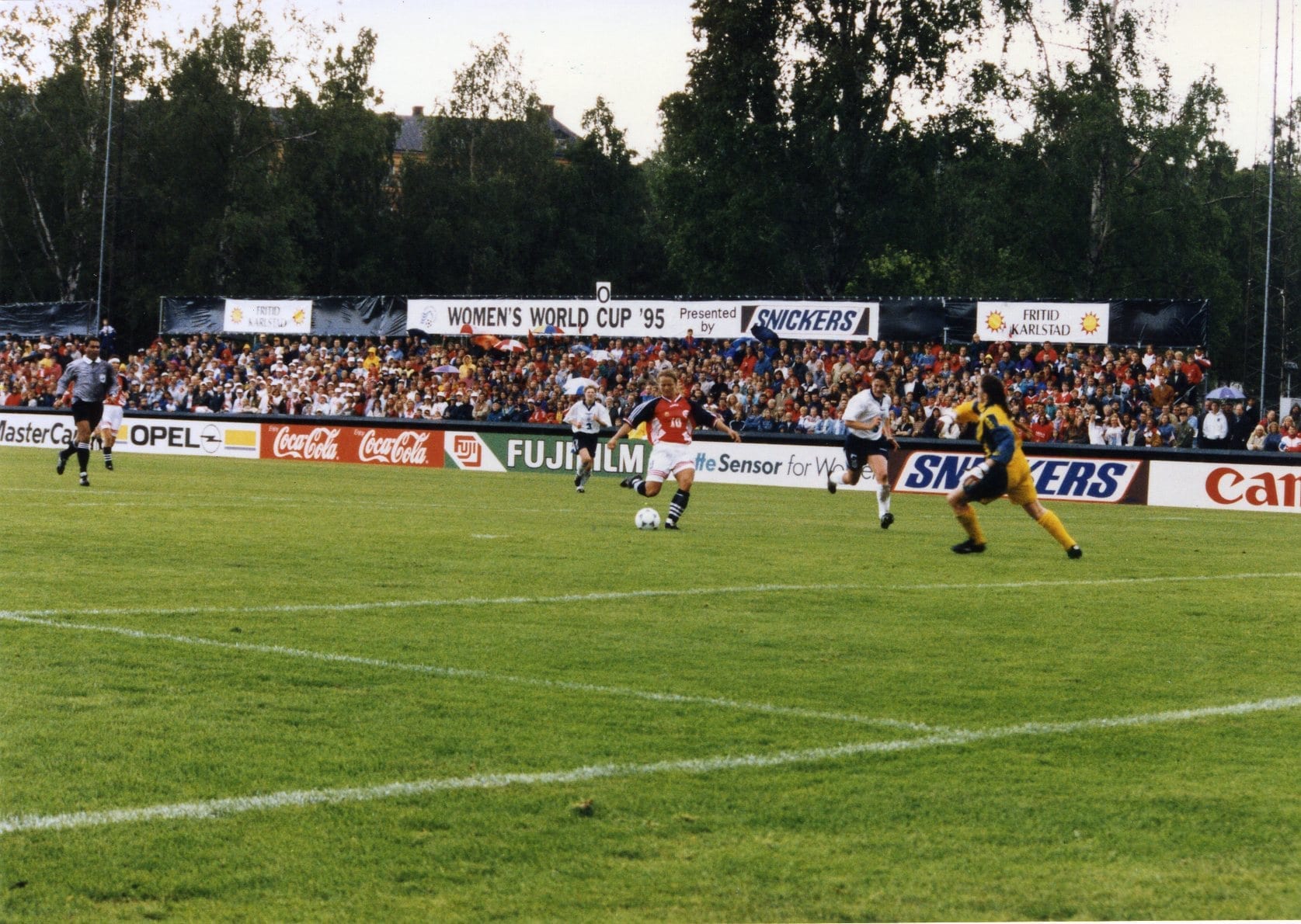 Linda Medalen preparing to shoot for goal against England goalkeeper, Pauline Cope. Fortunately for England, Medalen would not score in this group match.

In the thick of it 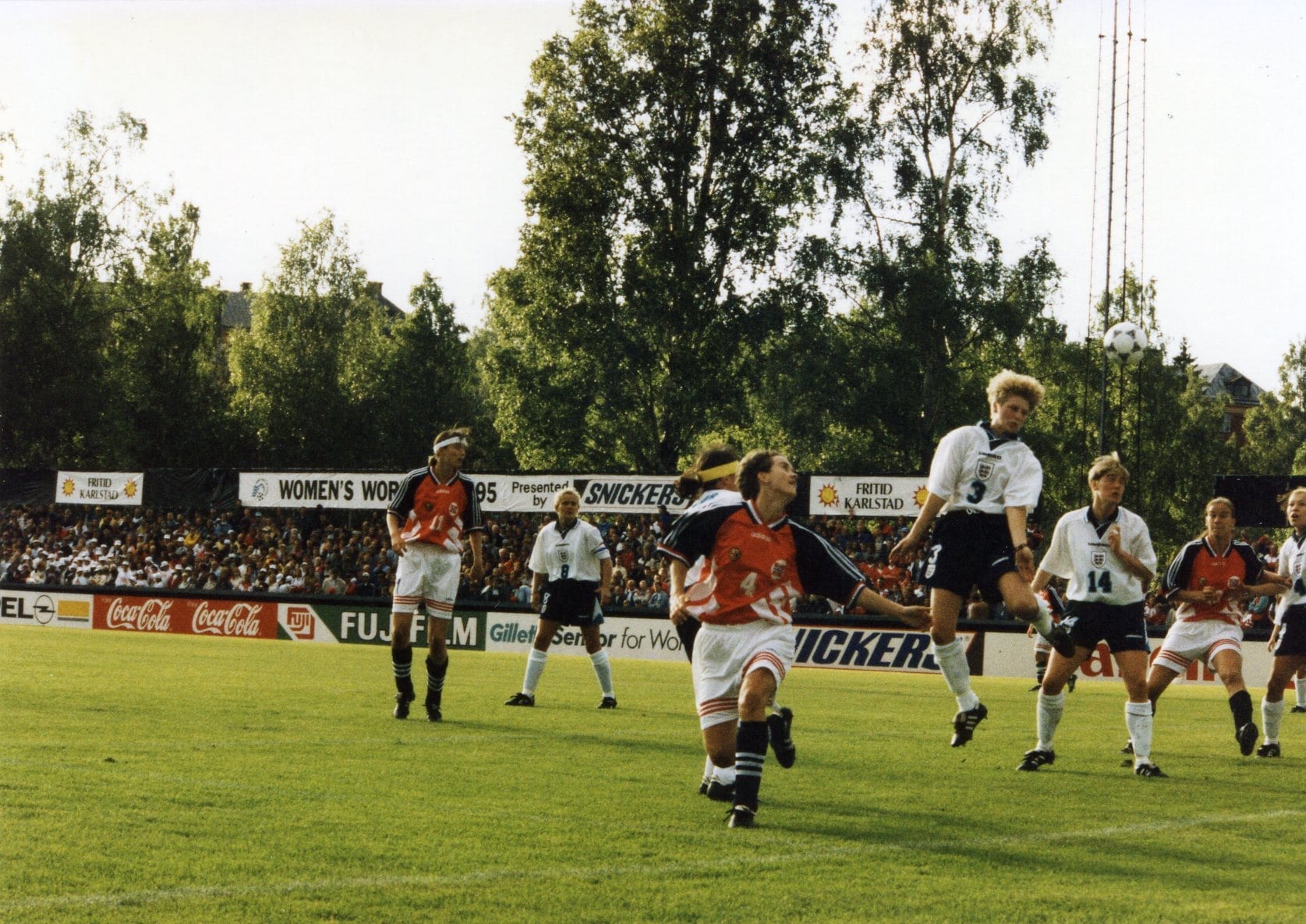 Displaying the physical side of the game, England No.3, defender, Tina Mapes gets stuck in. Despite the English FA once considering women to be physically unsuited to the rigors of football, there is certainly no evidence to prove this theory here 74 years later. 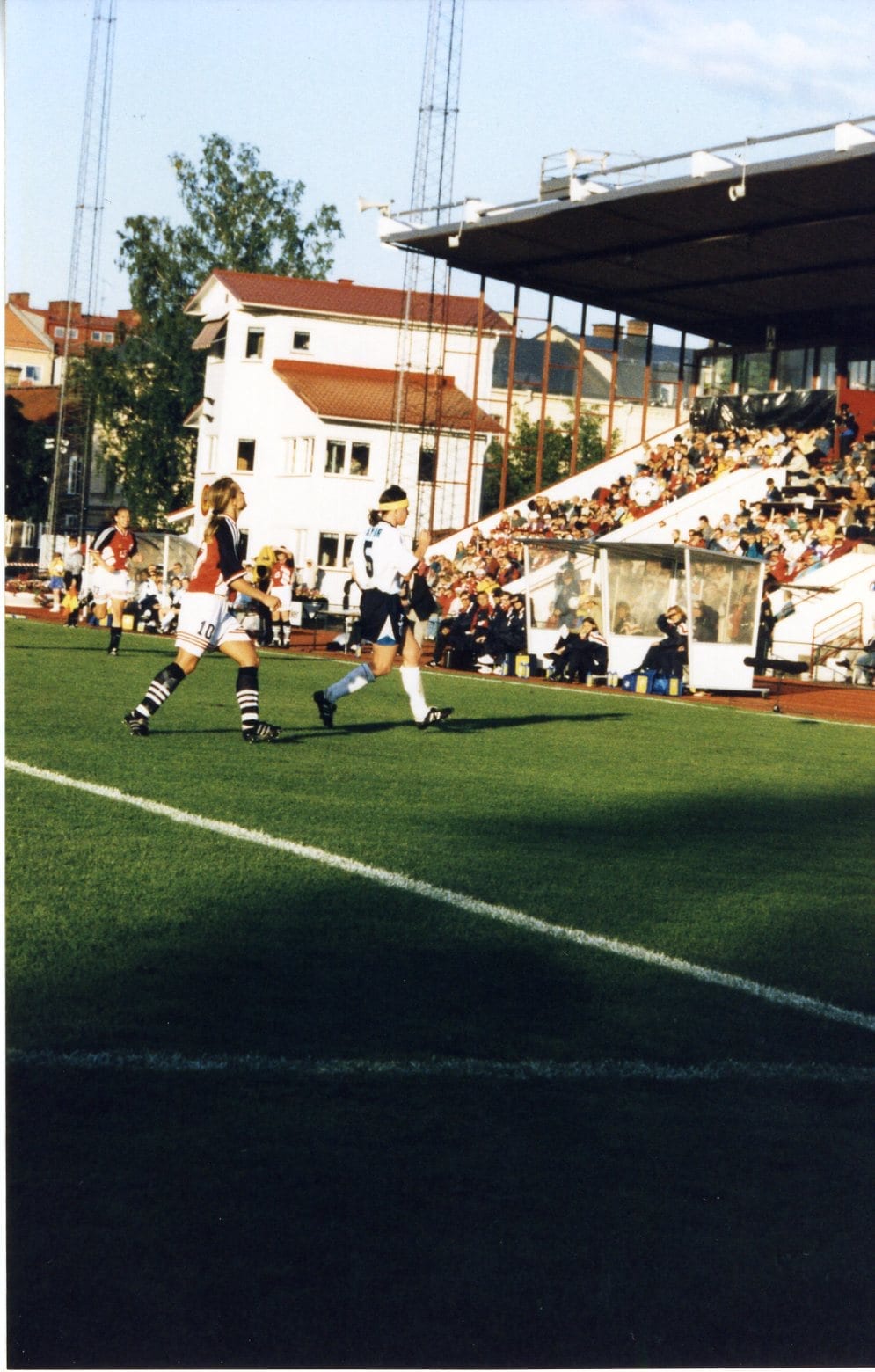 Medalen marking Taylor with Norway No.13, defender, Merete Myklebust closing in. Despite being a successful English sporting athlete, Taylor had to balance competing for the national football team with an ‘actual’ job. Reflecting on this she said ‘The amount of time I spend away on unpaid leave has got beyond a joke’. 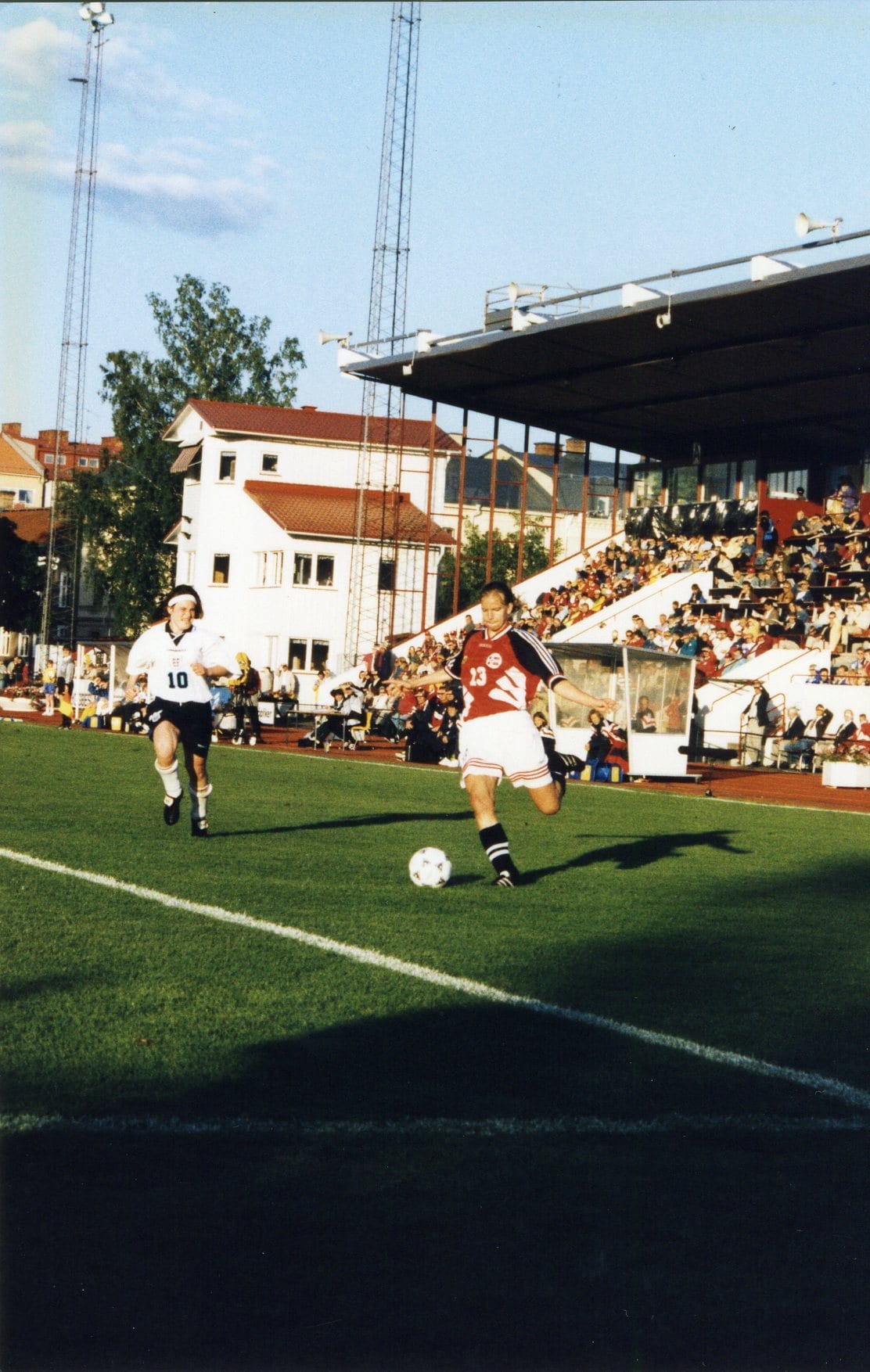 Myklebust winding up to cross the ball with England No.10, midfielder, Karen Burke closing in. Norway would start this competition as they meant to go on, going for nothing less than World Cup champions having been beaten in the 1991 final by the USA. 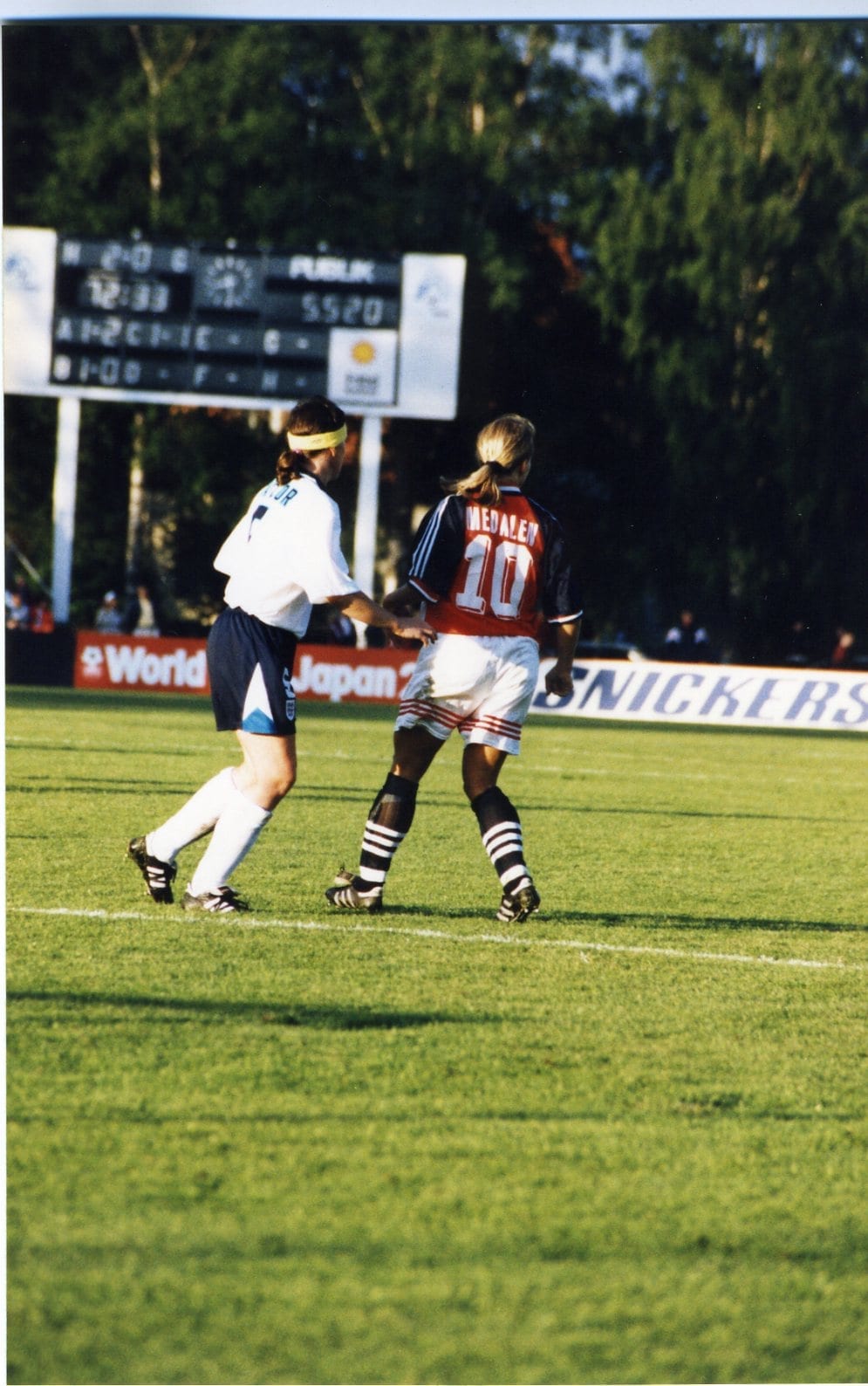 Taylor and Medalen casting long shadows on a game that had already been decided in the first half. Although slightly out of focus the scoreboard in the background reveals the score to be 2-0, which it would remain as.  Also mentioned is the crowd attendance and the match time as 72 minutes 33 seconds of the game played. 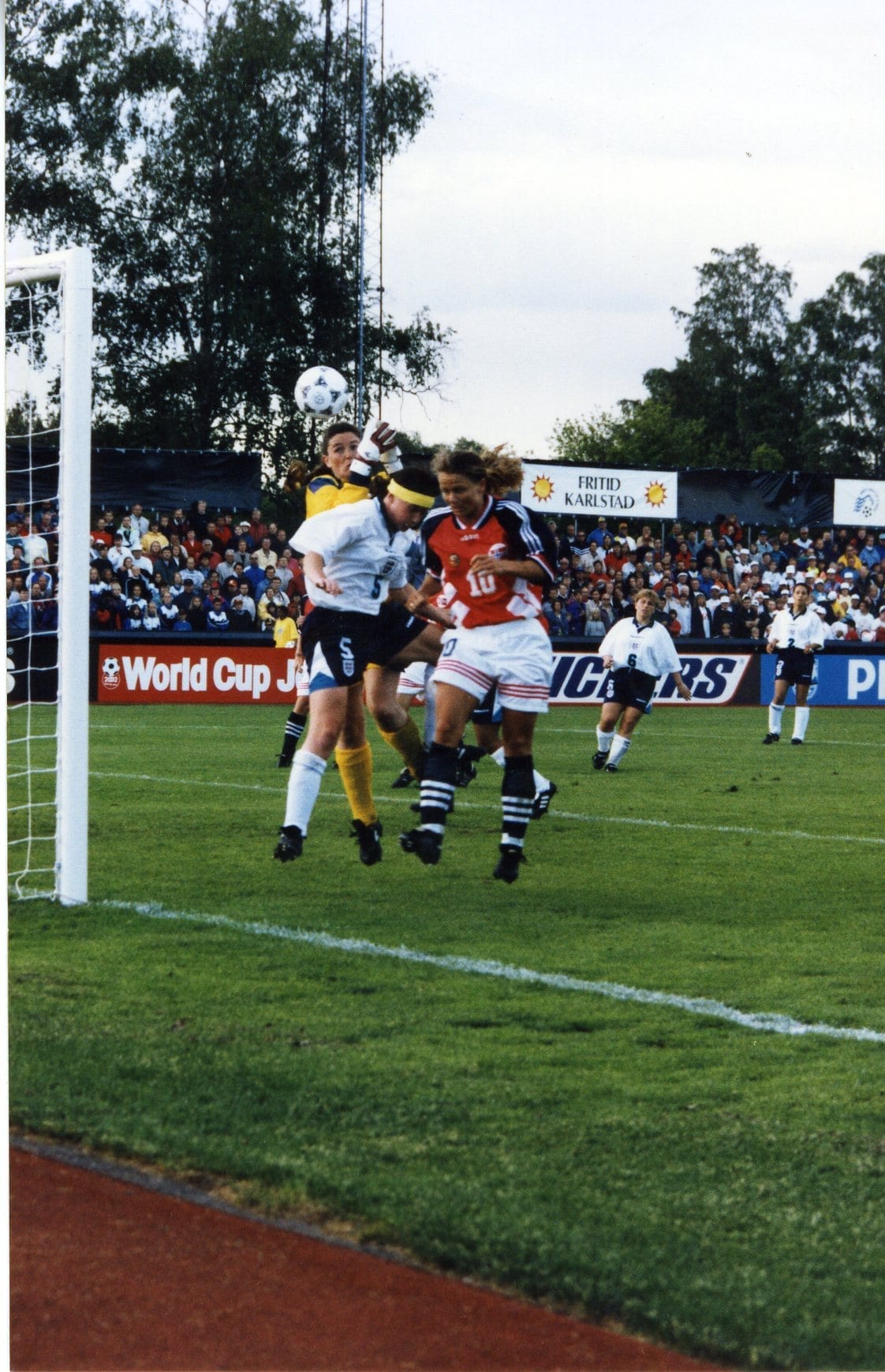 Medalen denied a goal again, with Taylor and Cope adding their weight to frustrate Norway’s attempts. This would not be the case in Norway’s quarter-final win over Denmark where Medalen would score her team’s second goal with the eventual score line ending 3-1 to Norway.

Shadow of the men's game 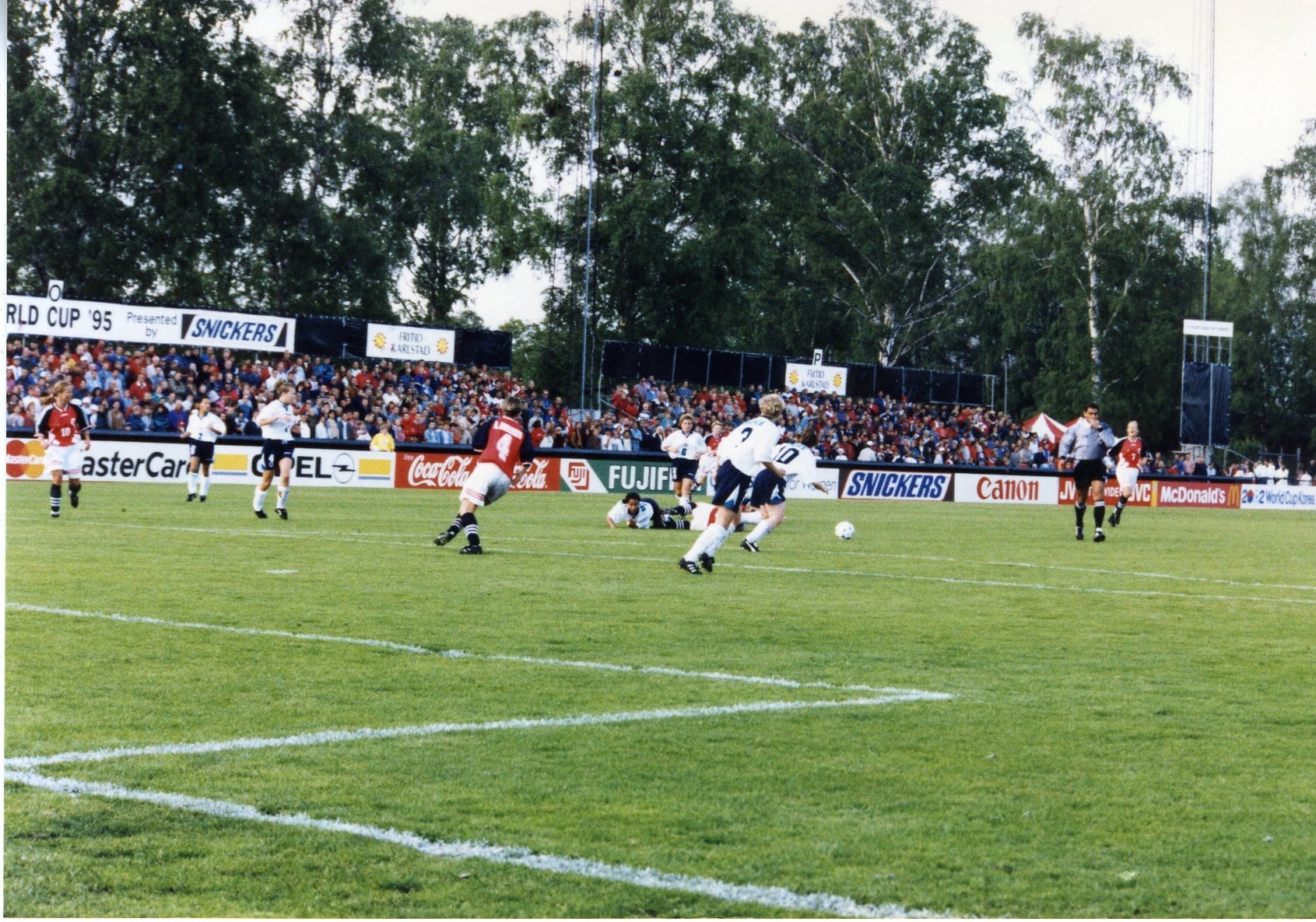 Reminders of the dominance of the men’s game make themselves known. At the bottom right hand side of the snapshot, amongst the well-known brand names, is the visible advertisement of the future 2002 World Cup and one of the host countries. 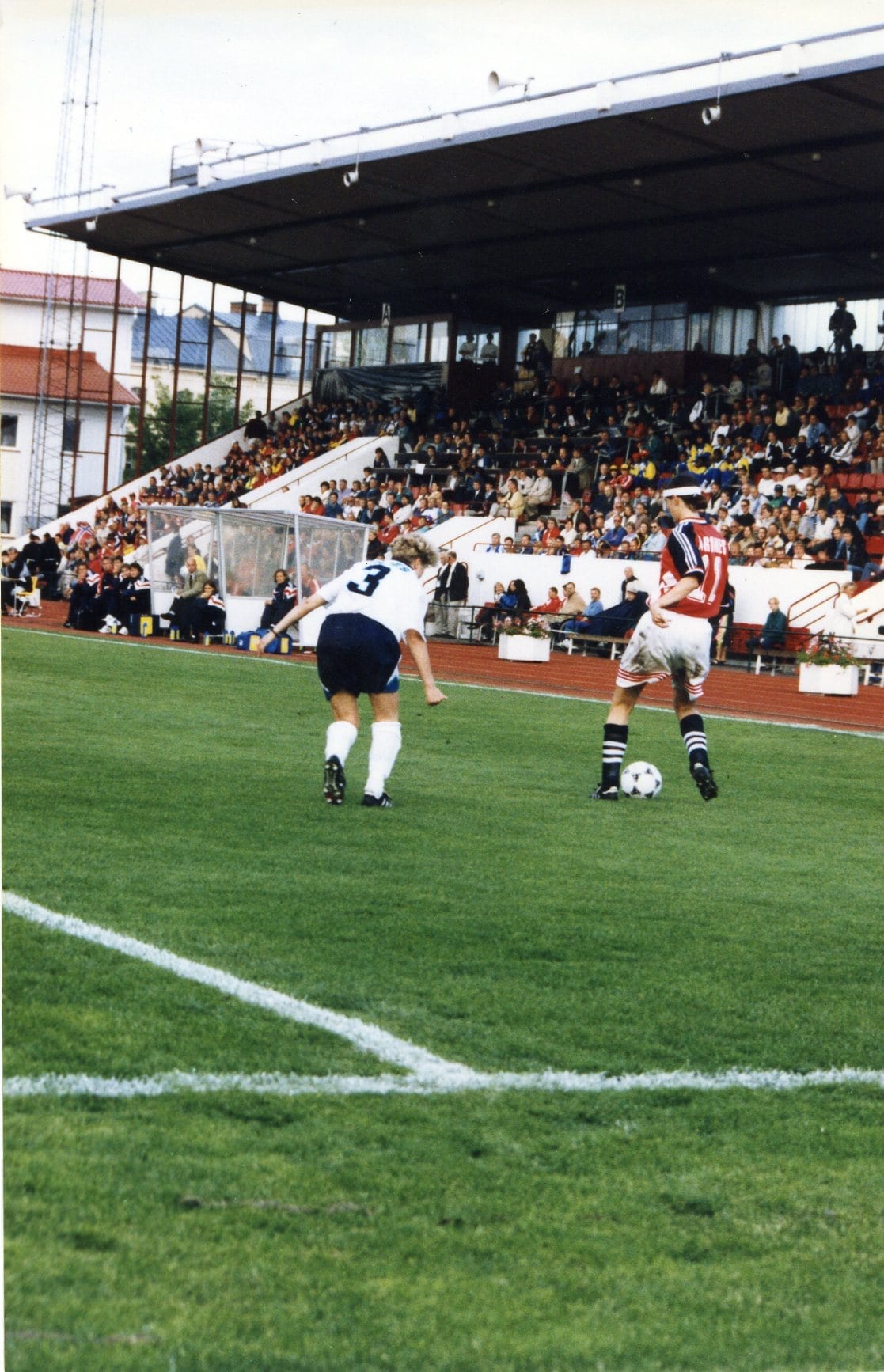 Tina Mapes covers Norway No.11, forward, Ann Kristin Aarones. Although Aarones would be denied a goal in this Group B match she would finish the tournament as the top goal scorer, and be one of three recipients of the Adidas Golden Ball Trophy and the prestigious Golden Boot. 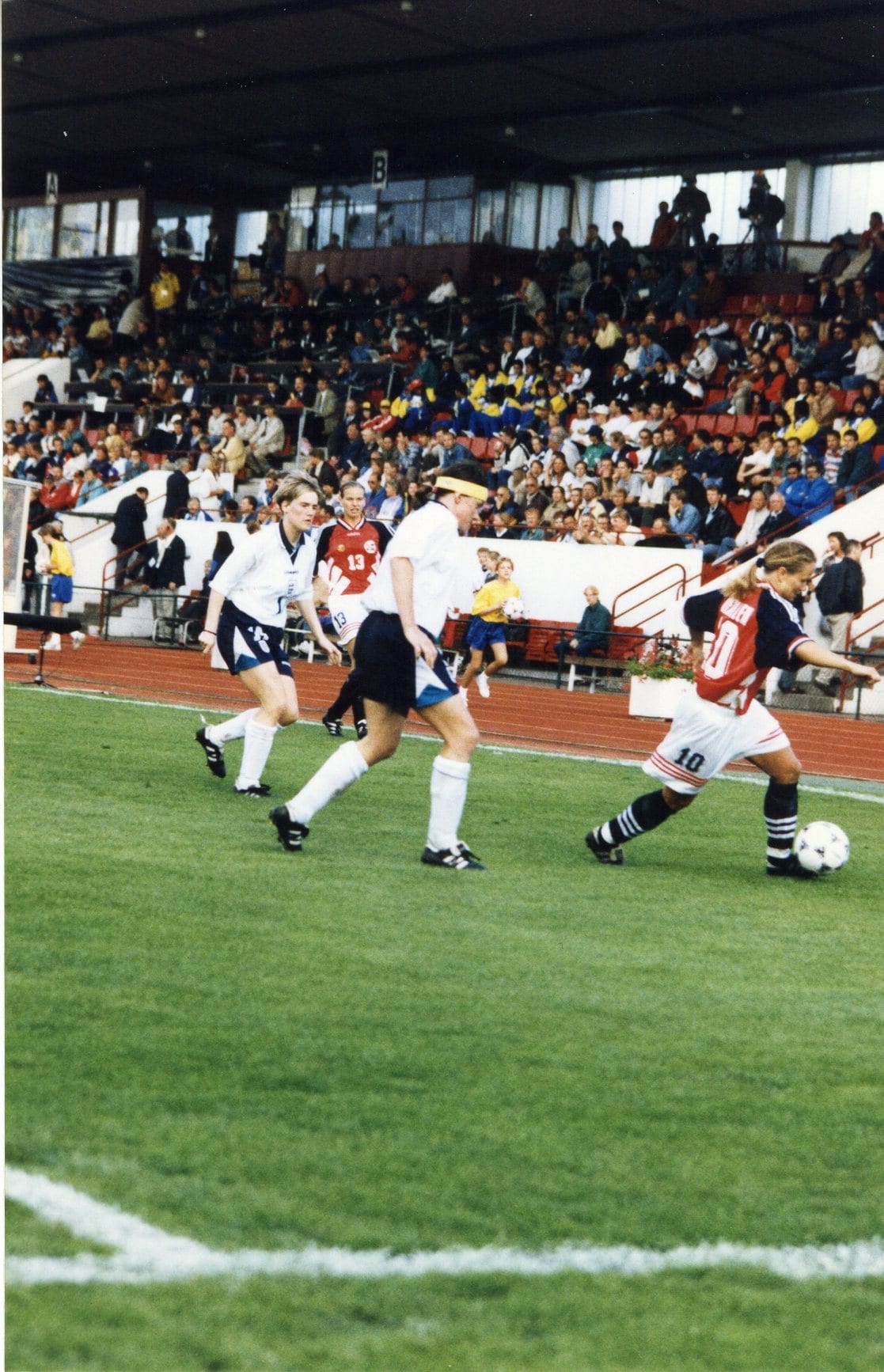 Although there was media coverage of the women’s 1995 World Cup matches, very little if any of the tournament made it on to British television screens, especially in a year when the men’s Rugby World Cup was taking place.

However, with the dawn of social media in the 21st century, footage of the women’s game would not escape public notice even in the face of still relatively little television coverage. The closing minutes of the 2011 Women’s World Cup final would break Twitter’s record at the time for the most tweets posted per second, eclipsing other notable world events including the marriage of the Duke and Duchess of Cambridge. 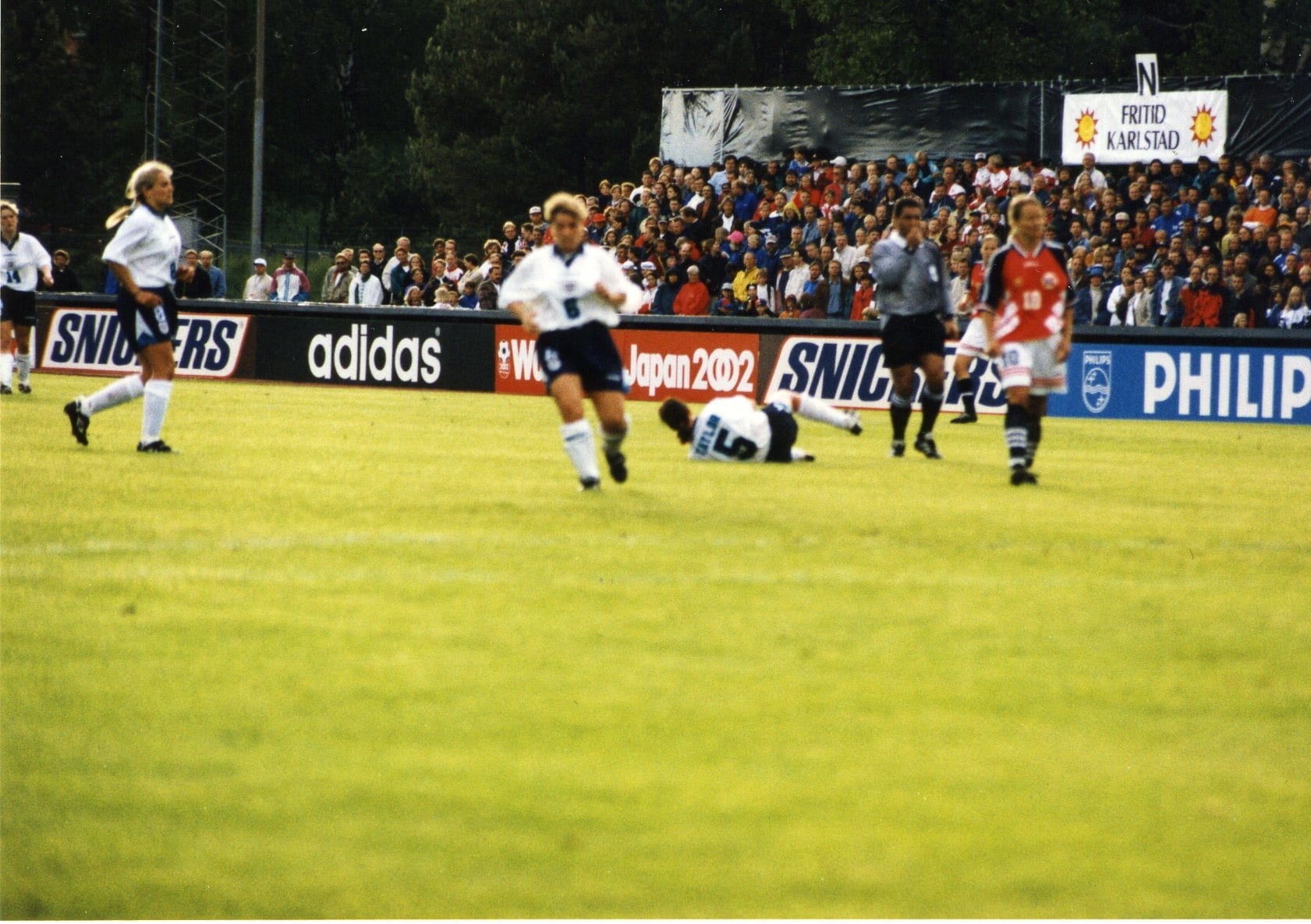 Clare Taylor and the rest of her teammates played their part in keeping Norway to a scoreline of 2-0. Norway’s dominance in the group stages is proven by the fact that they scored a total of 17 goals and conceded none. Their opening group game against Nigeria played on the 6th June ended at 8-0 and their final game against Canada, played on 10th June, ended 7-0. 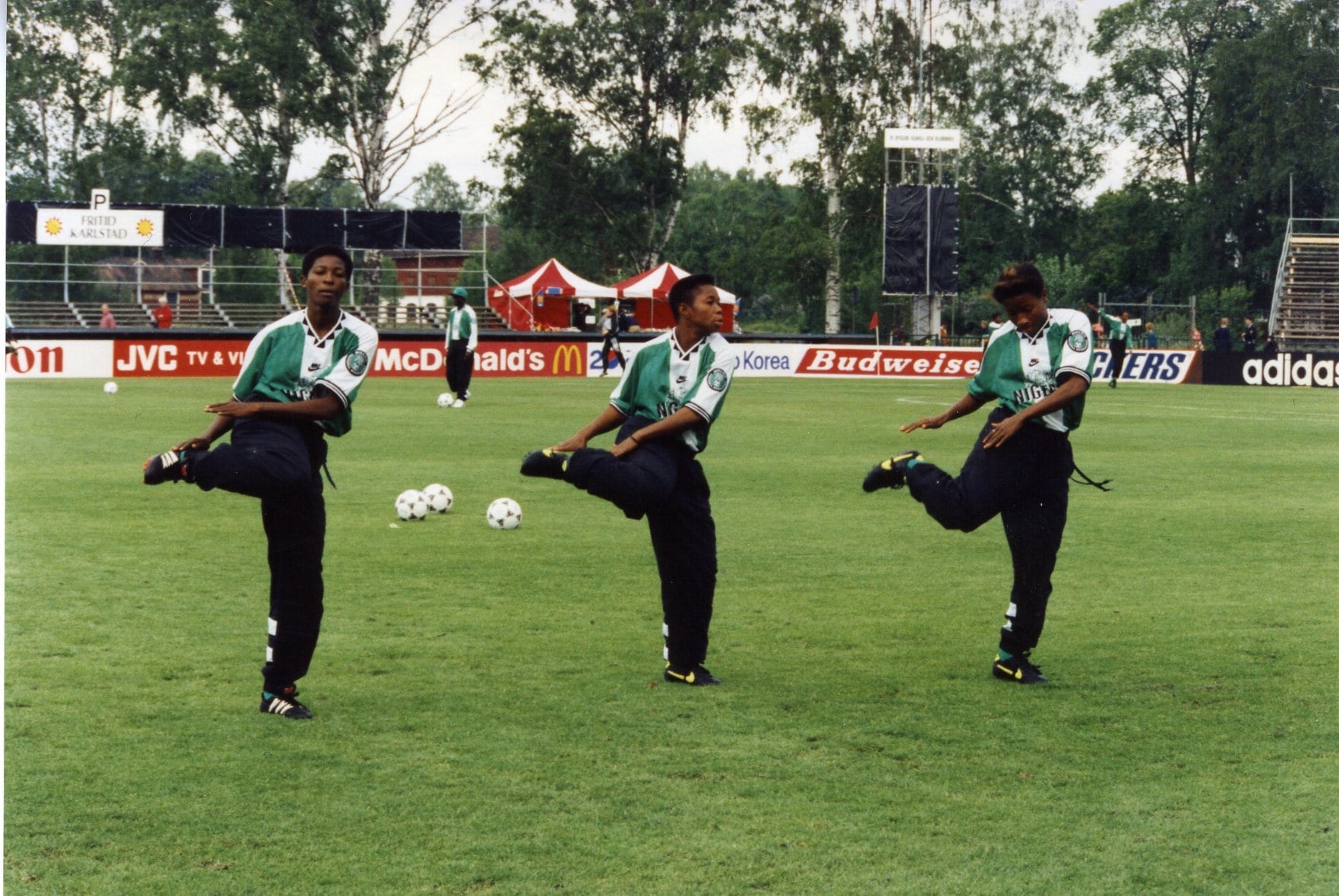 The ‘Super Falcons’, as the women’s Nigerian national team is known, in a pre-match warm up routine at Tingvalla Stadium, Karlstad. This match was the final group stage game for England and Nigeria. Both teams had suffered defeats to Norway at this stadium and nothing short of a win for both teams would do if either was to claim second place and progress to the quarter-finals. 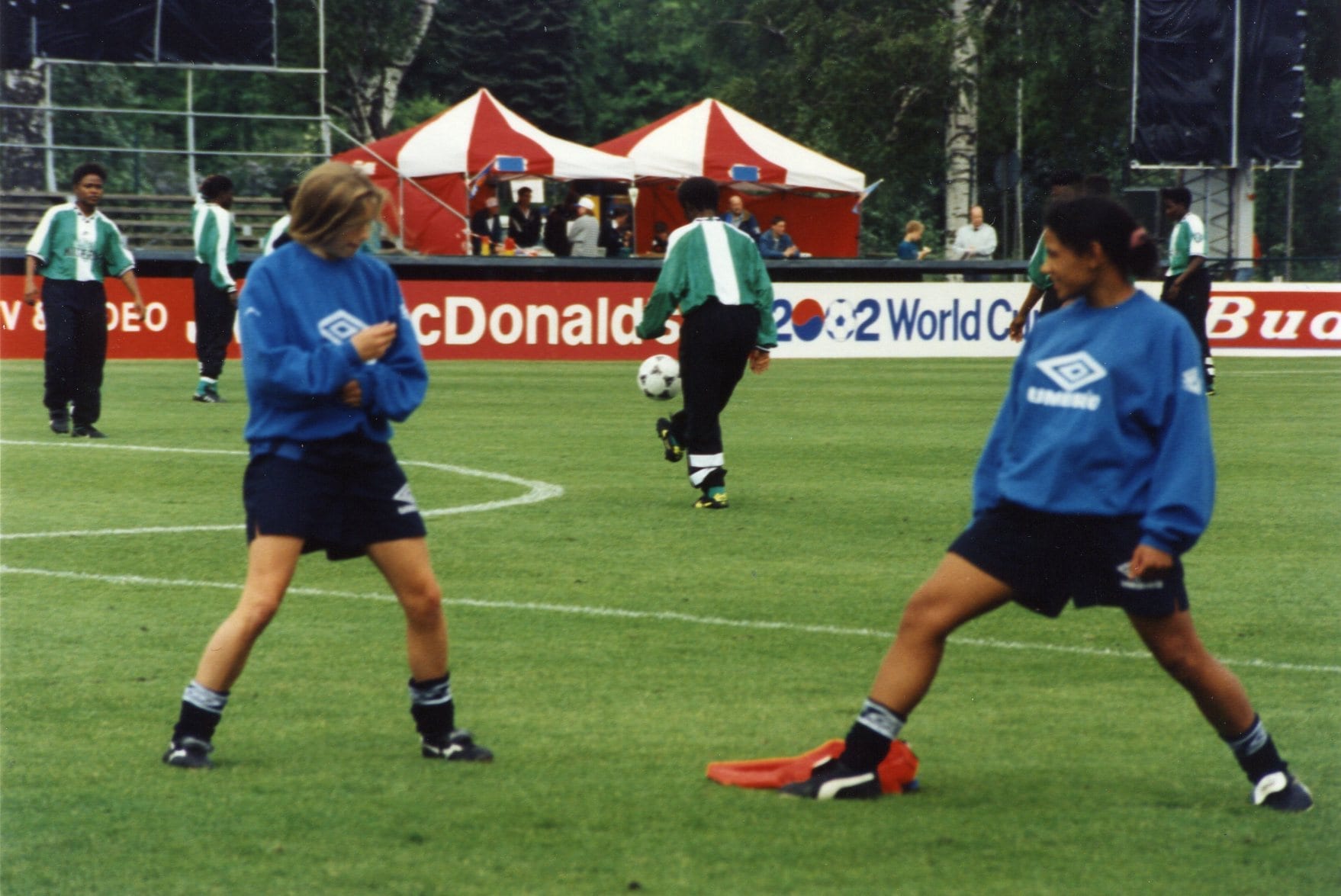 Despite it being the women’s tournament it is hard to get away from the lure of the men’s game with the unmistakeable marketing of the men’s 2002 World Cup. However, the entire sponsorship programme associated with the women’s game for the 2011 World Cup finals had sold out 18 months before the start of the tournament. 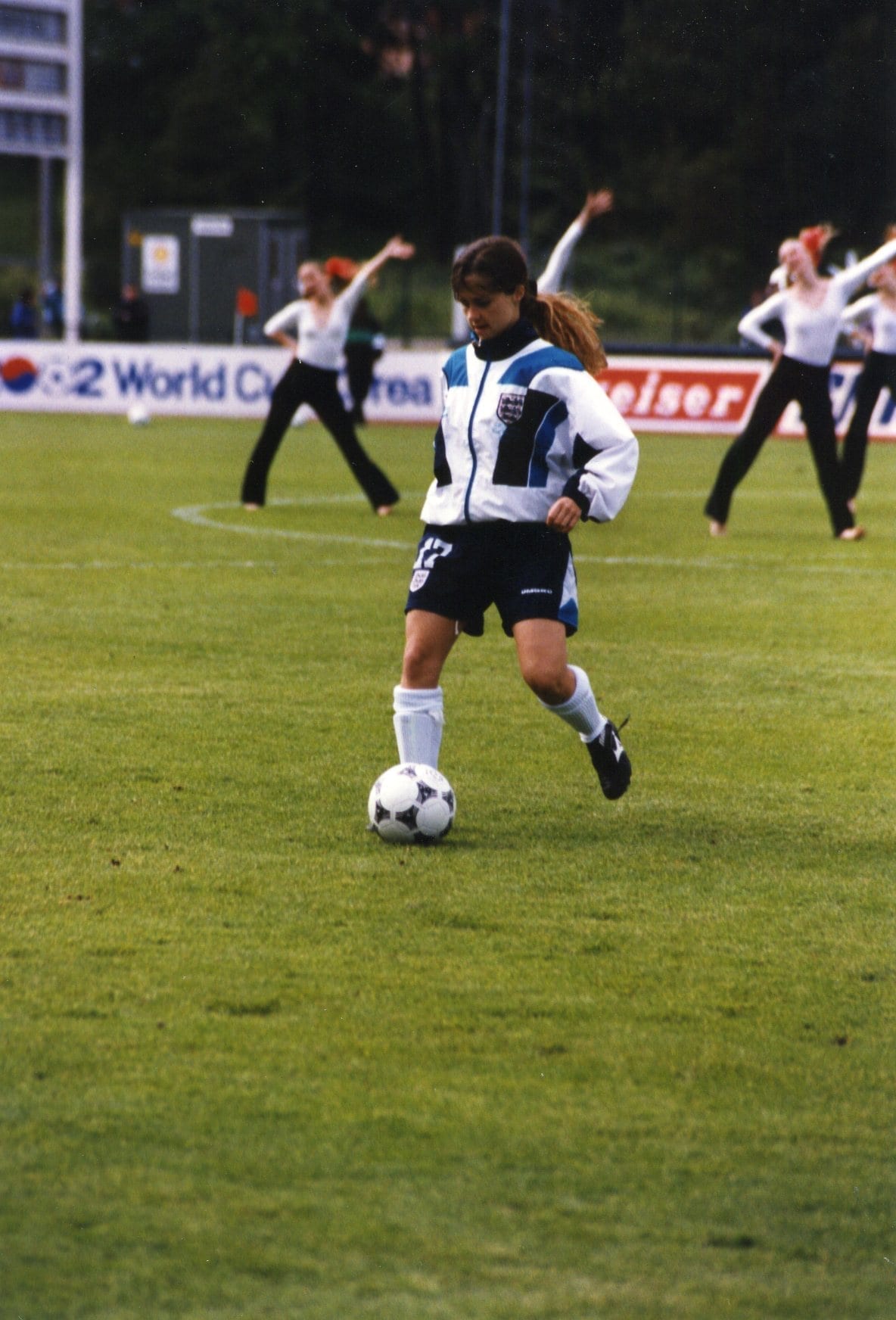 Another leading figure in the England squad, Louise Waller would enjoy a very successful career on the pitch for Millwall Lionesses. She won the 1996-97 Premier League title and the 1991 and 1997 FA Cup finals, scoring the winning goal in the latter match. Off the pitch, Waller would take on roles including coach and development officer for her club, and be heavily involved in establishing the country’s first girl’s football Centre of Excellence. 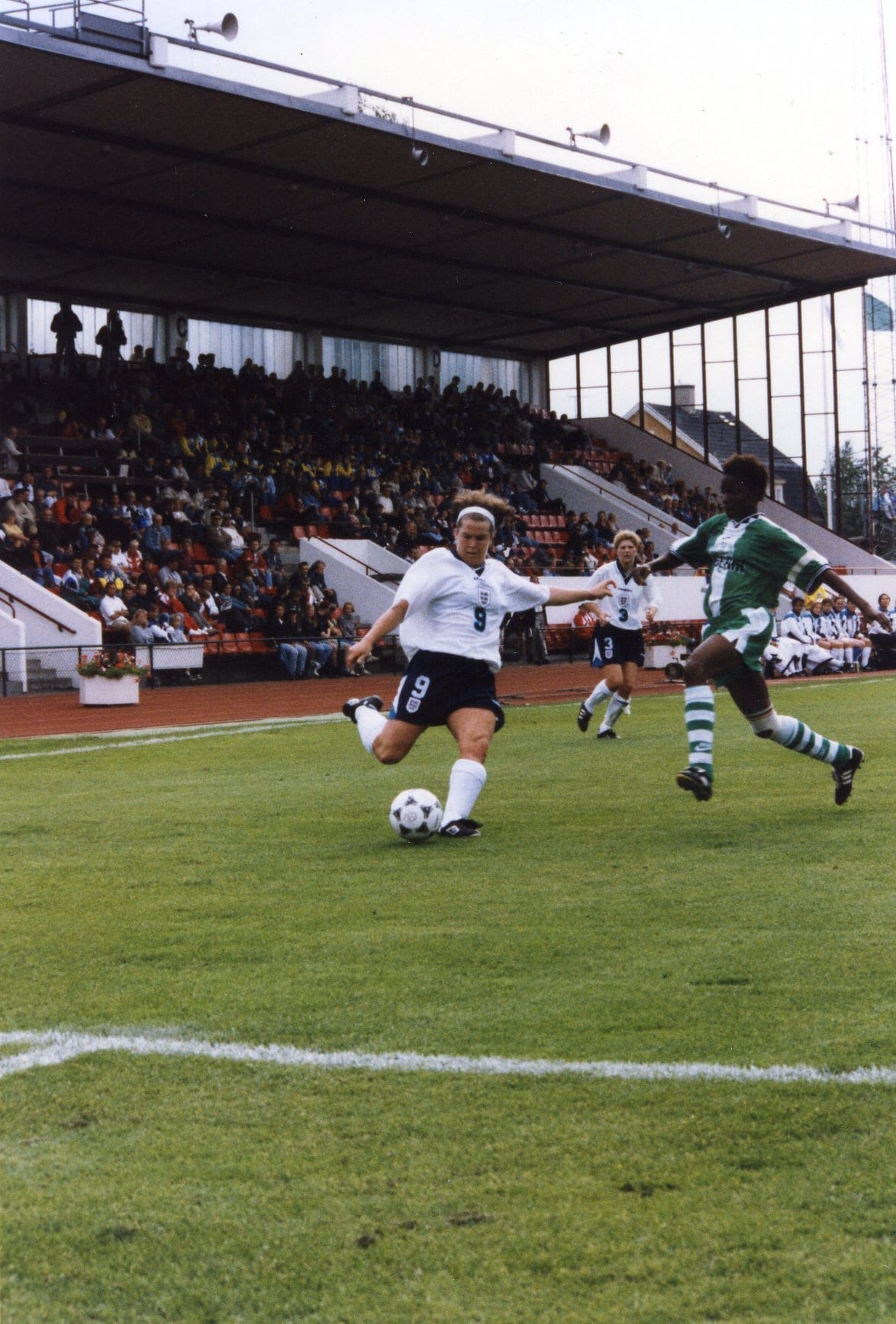 England No.9, forward, Karen Farley making her mark on the must win game for both teams. Farley would be no stranger to playing in Sweden as she would play domestic football for teams that included Hammarby IF DFF. In this match Farley scored England’s first goal in the 10th minute and a second, England’s third of the match, in the 38th minute. 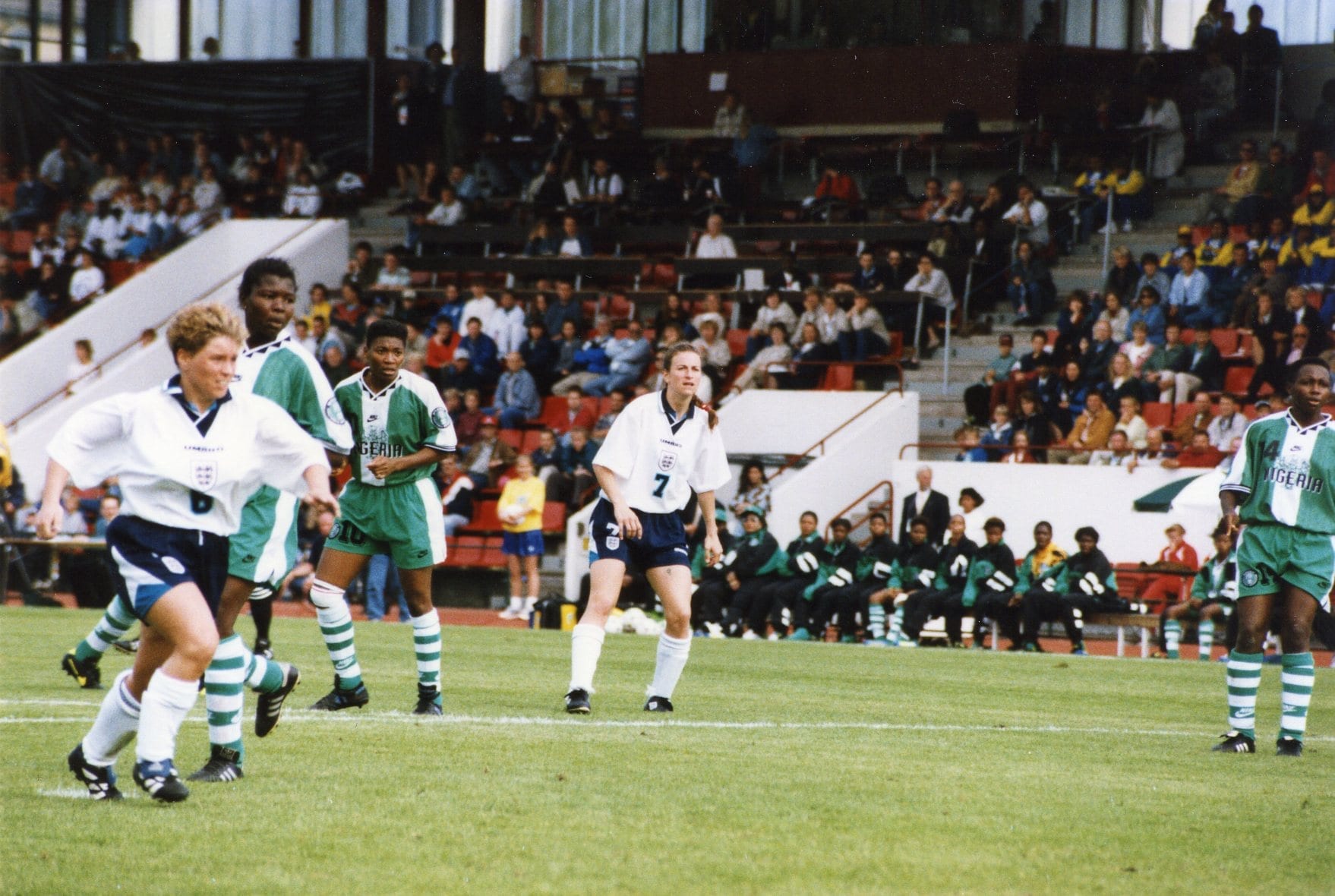 One of the greatest players of the English women’s game, Marianne Spacey enjoyed domestic success with Arsenal, winning three Premier League titles and four FA Cups and a treble winning season with Fulham. As a manager Spacey would lead the England Under-23 team to the Nordic Tournament title in 2017. 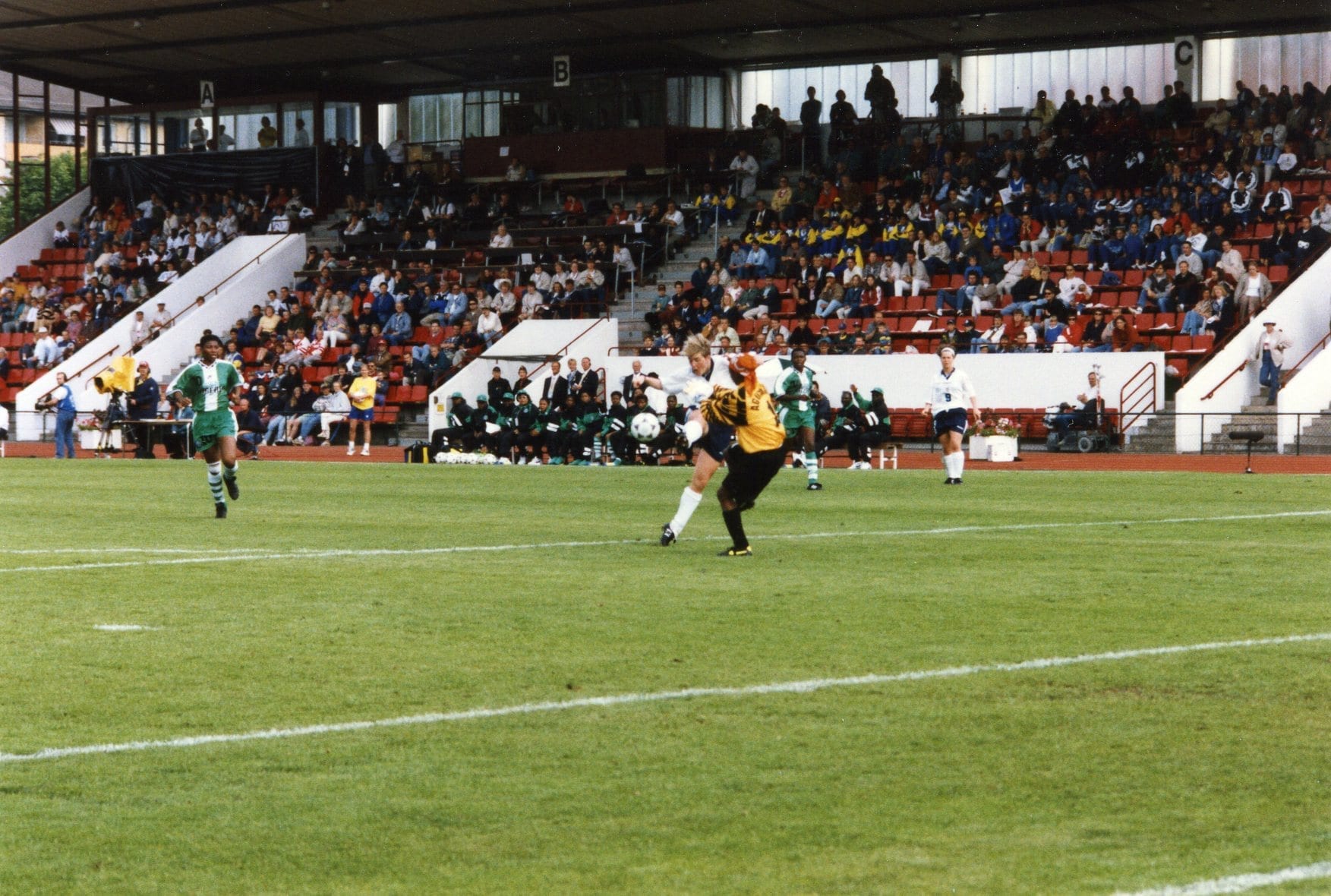 Nigeria No.1, goalkeeper, Ann Chiejine and England No.14, forward, Karen Walker go head to head. England’s second goal would be scored by Walker in the 27th minute to make the score 2-1 to the Lionesses. 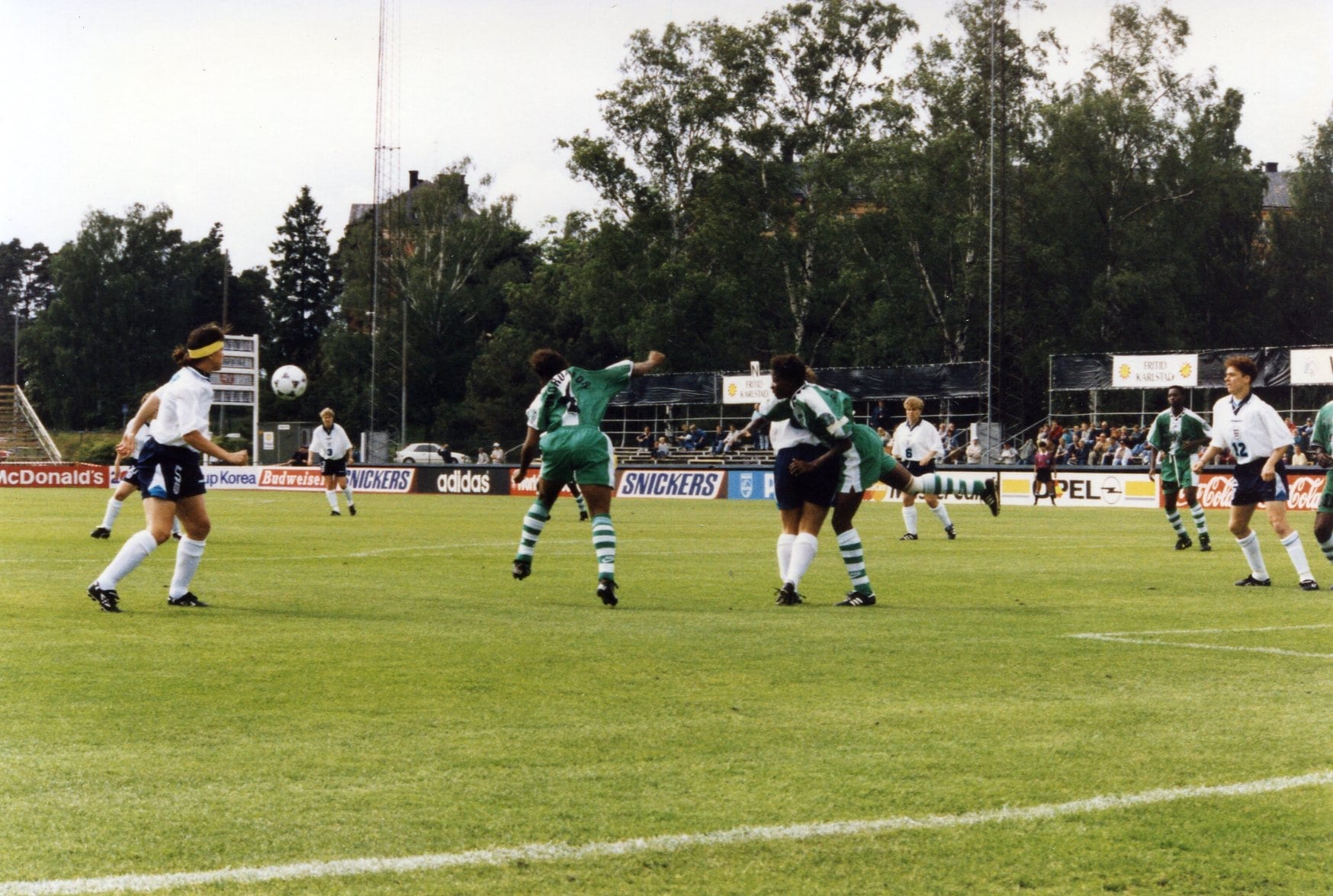 Okoroafor would score Nigeria’s first goal of the match in the 13th minute, three minutes after England opened the lead, levelling the score at 1-1. 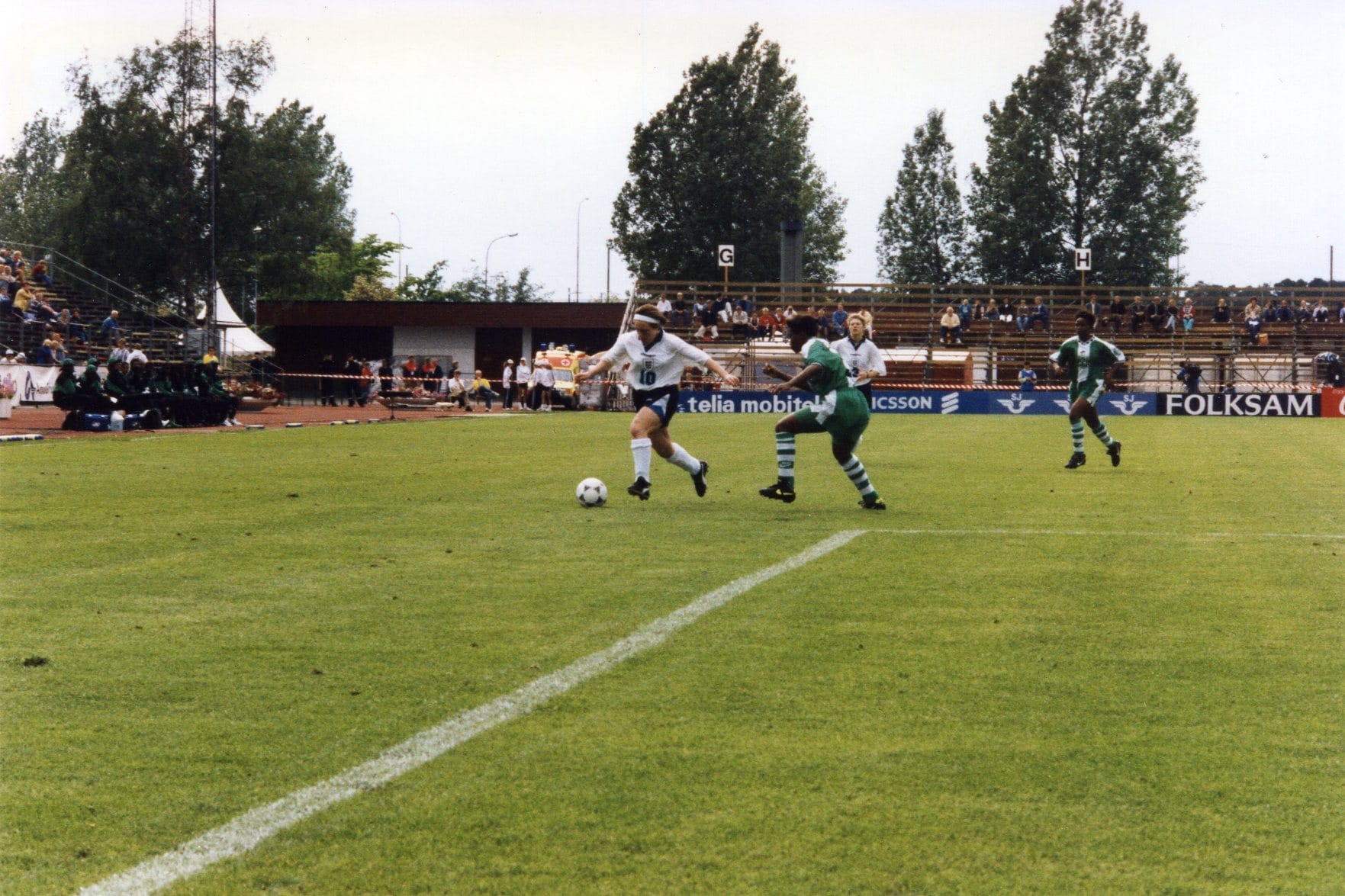 The crowd attendance at this Group B match was recorded as 1843.

Despite the home nation, Sweden, attracting 14,500 spectators to their opening game, crowd attendance would dwindle in the group stage matches. The lowest attendance would be the Group B match between Nigeria and Canada at the Olympia Stadium, Helsingborg, which totalled only 250.

All to play for 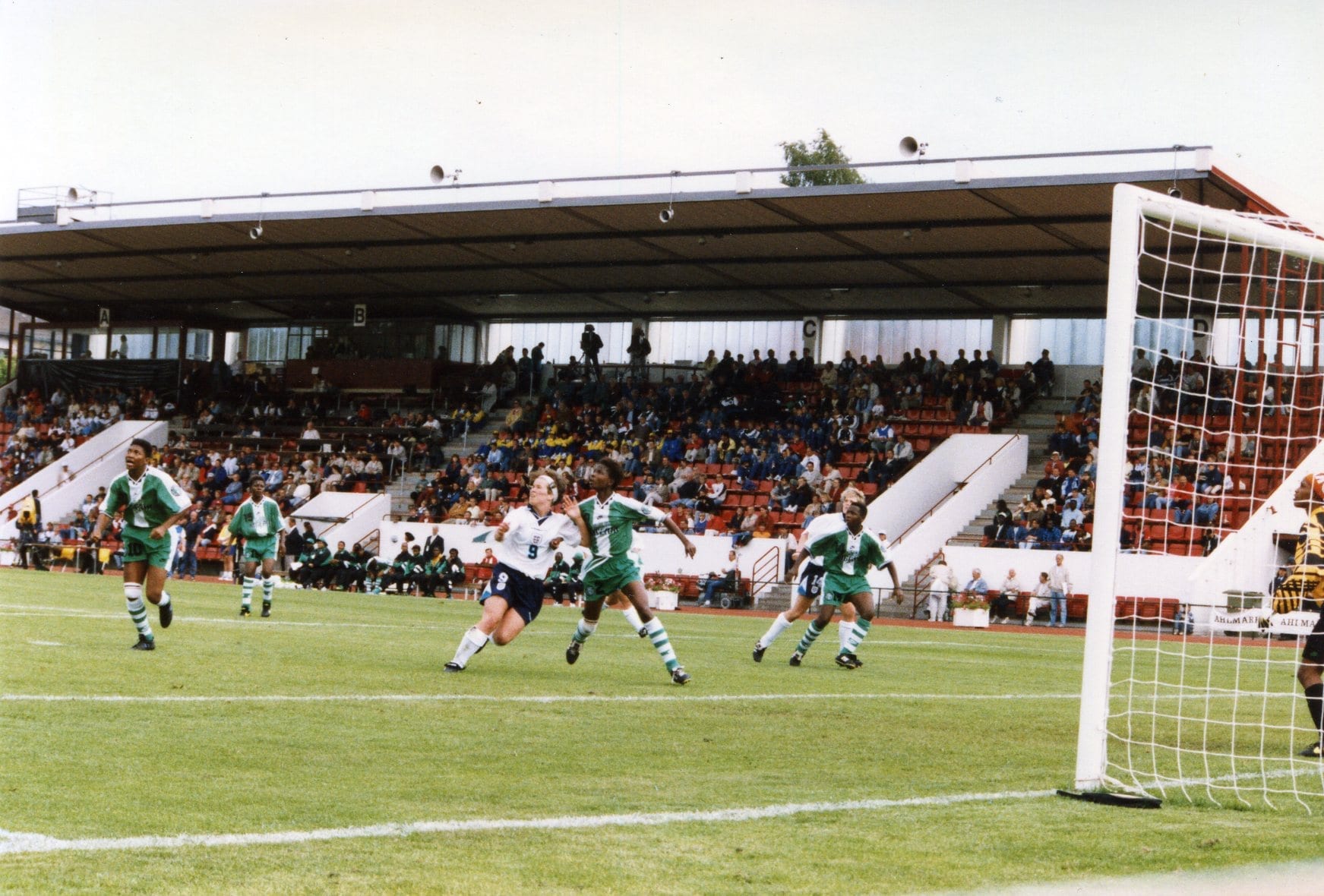 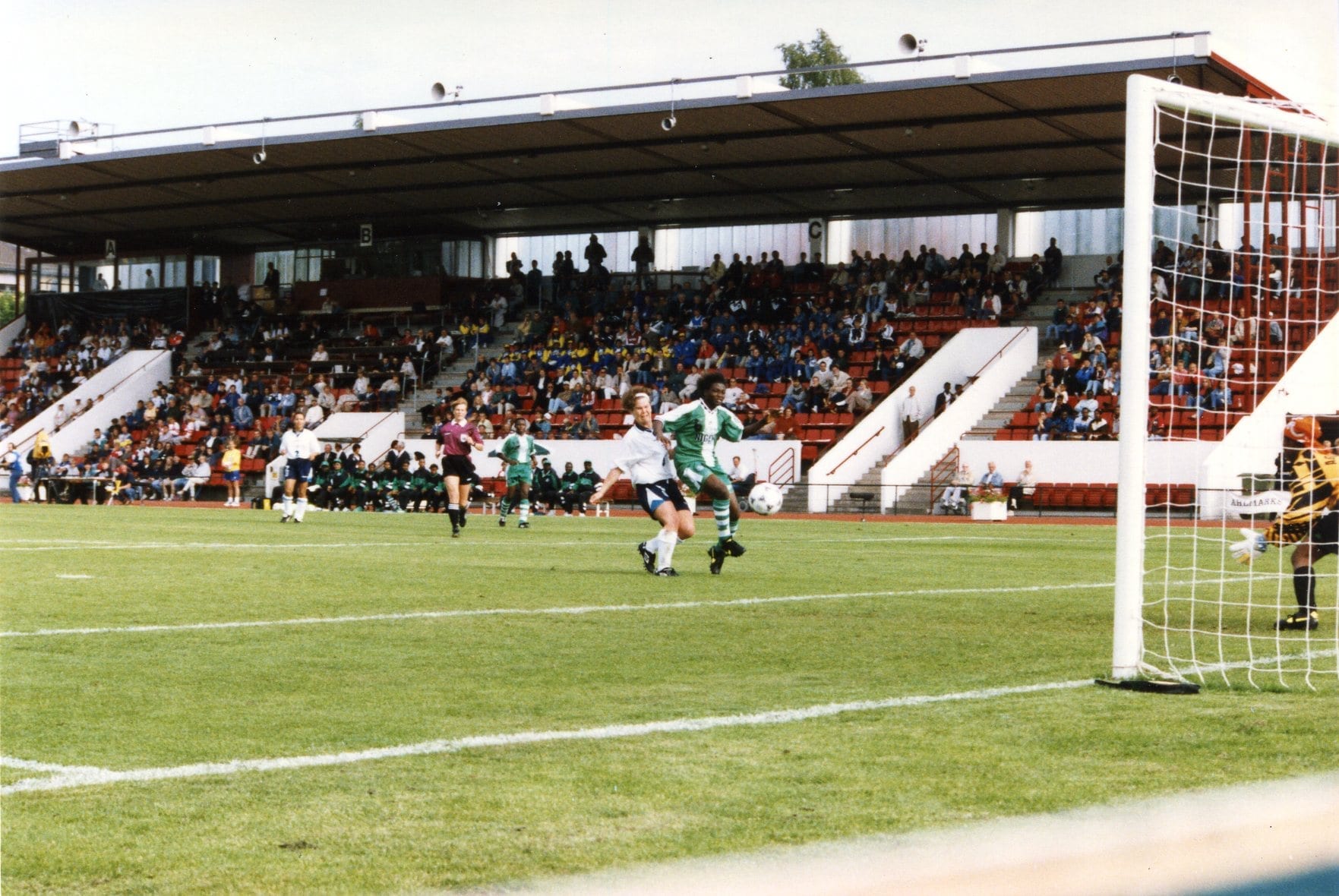 As with England’s game against Norway, television cameras visible in the stands record the coverage that would be broadcast or could be viewed. However, by the 2011 Women’s World Cup, the average viewer watching globally per match would be 13.2 million. 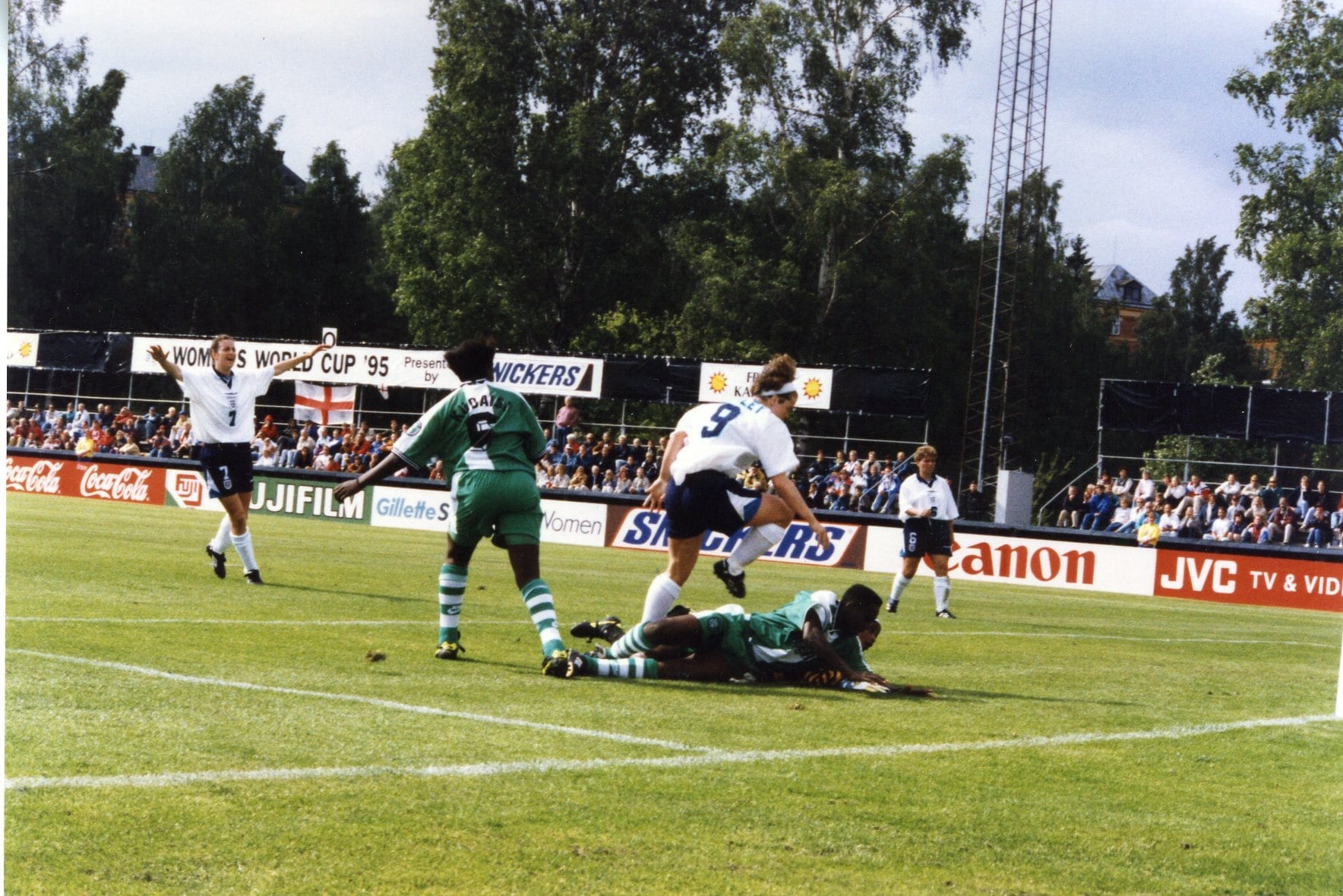 The raised arms and expression of Marianne Spacey suggest this could be the case. England No.9 Karen Farley is in close proximity to the Nigerian goal and did score two of England’s three goals, with the possibility this could be one of them. Or not. 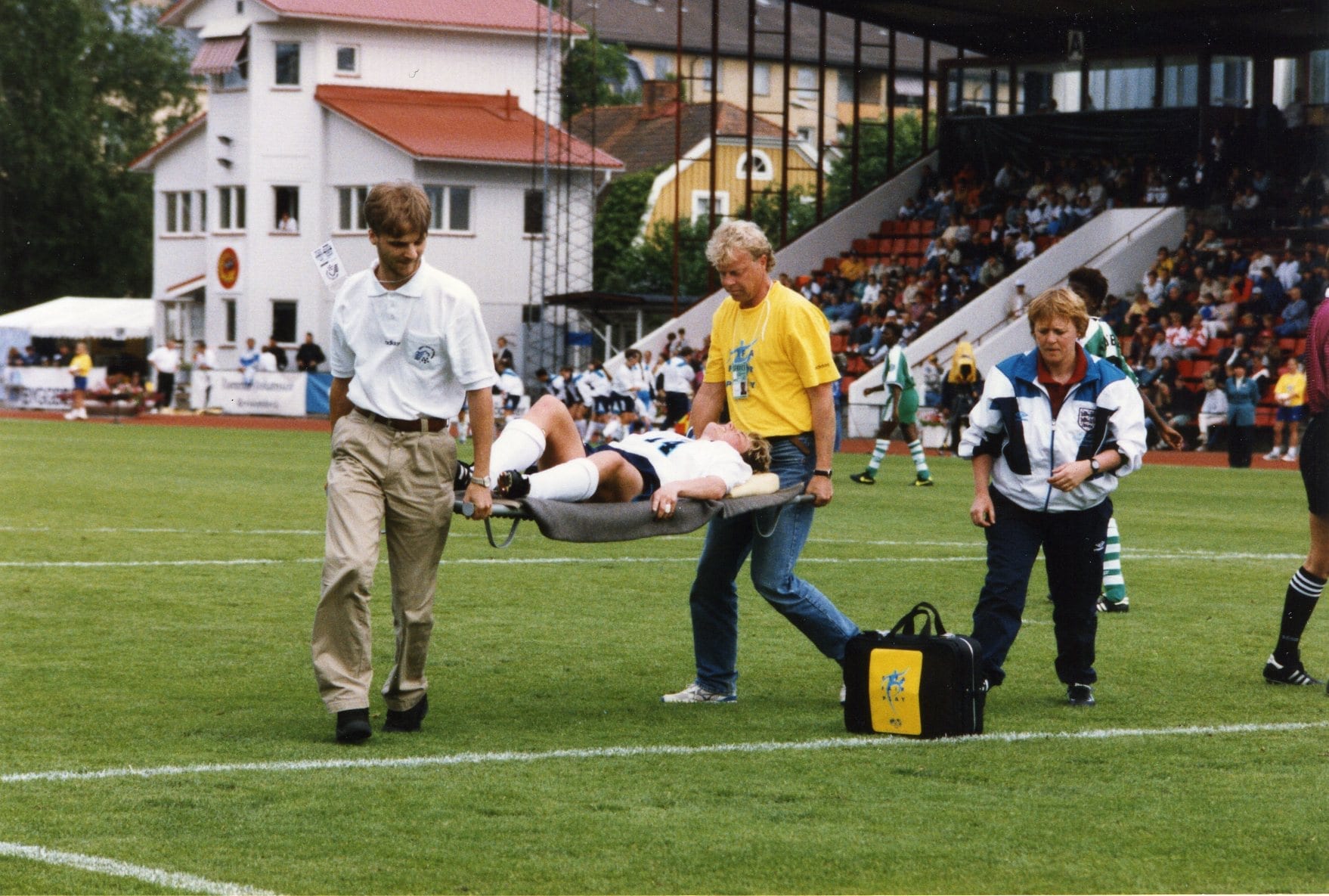 Despite being stretchered off the pitch Karen Walker is not recorded as being substituted in this match. Walker would feature in the England squad that would face Germany in the quarter-finals three days later. The last substitution in this game would be made in the 81st minute for England with Clare Taylor being replaced by Samantha Britton. 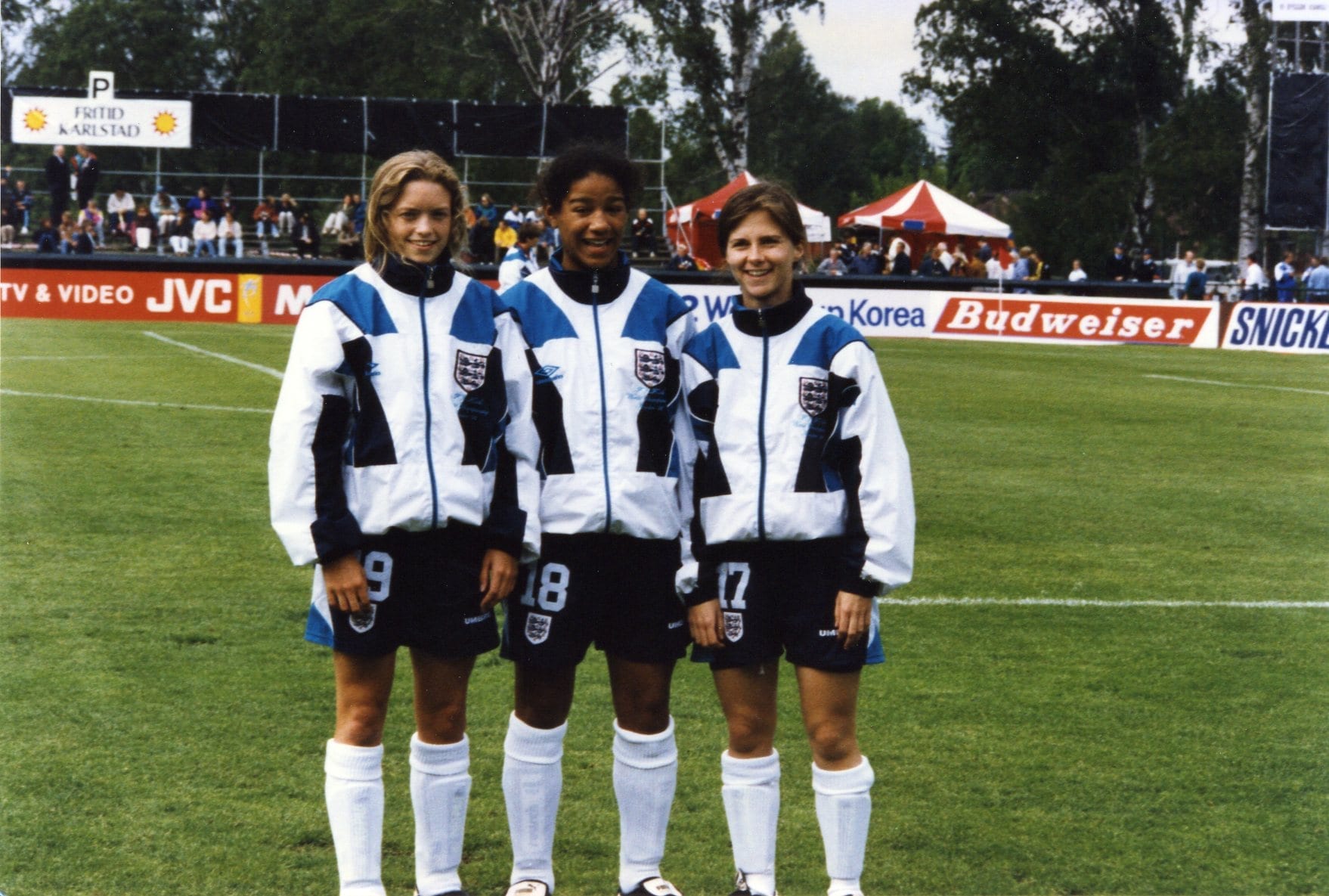 The final of the FIFA Women’s 1995 World Cup would be won by Group B winners Norway. They would beat Germany 2-0 and would be the leading tournament goalscorers with an impressive 23 being scored. The deciding final match would see the maximum crowd attendance of the tournament at 17,158.

Despite England being knocked out of the tournament at the quarter final stage, losing 3-0 to Germany at the Arosvallen Stadium, Vasteras, which saw a crowd capacity of 2317 spectators, there were some positives to be taken from the tournamnet for the Lionesess.

This was England’s debut at the second official FIFA Women’s World Cup. Norway would score seventeen goals in their Group B matches, but only two be scored against England. Keeping the eventual tournament champions at bay with a low goal scoreline did allow England to make their mark as not being a pushover in their debut official FIFA World Cup. They would win their Group B matches 3-2 respectively against Canada and Nigeria meaning they finished second in the group and progress to the quarter finals.

For Nigeria this would be the Super Falcons second official FIFA World Cup tournament. Despite the team’s lack of success at world tournament events the Nigerian women’s team have enjoyed domestic success at the African Championships, being crowned champions 10 times between 1991 and 2016.