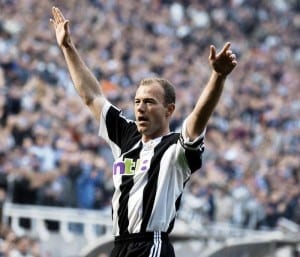 When he announced his retirement in 2006, Alan Shearer - the Premier League's all-time leading goalscorer with 260 goals, said "When I was a boy I wanted to wear the number nine shirt and score goals at St. James' Park - I've lived my dream."

The Newcastle hero had to do things the hard way to achieve that dream though. The boy who had grown up worshipping Kevin Keegan was eventually signed by him for a world transfer record fee of £15 million in 1996: he was the hottest talent in English football, and by that time already a Premier League winner with Blackburn Rovers.

According to a story told during Shearer's Hall Of Fame acceptance in 2014, as a schoolboy a trial at his beloved hometown club saw the club's future record goalscorer play much of the session in goal. Shearer's love for the game meant he'd get involved in any position; his strength and hard work meant he'd always do a decent job. But Newcastle's loss was to be Southampton's gain: the Wallsend Boys' Club product headed South to begin his career. 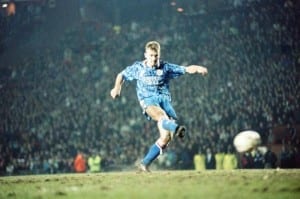 His First Division debut came in 1988 at The Dell: a hat-trick helped The Saints to a 4-2 victory over Arsenal. The 17-year-old's reward was to be a first professional contract at the end of the season. Shearer's physicality at the head of the Southampton attack marked him out as a classic English centre forward. But his 43 goals in 158 appearances for the South coast club gave little indication how prolific he would become in the Premier League era.

Blackburn paid a then British-record £3.6 million to take Shearer to Ewood Park for the first Premier League season in 1992. 16 goals in an injury-hit first campaign were just a taster; 31 goals in 93/94 saw Shearer named Player Of The Season. 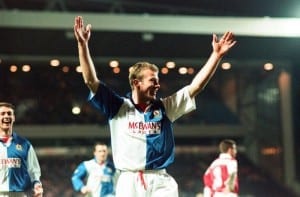 The following season Blackburn secured the Premier League title as Shearer formed the deadly 'SAS' partnership with Chris Sutton; 34 Shearer goals were a huge part of the title campaign. Surprisingly, it was to be the only major honour of his career.

Blackburn failed to defend their title, but Shearer became the first player in 60 years to score over 30 goals in three consecutive top-flight seasons.

For England, Shearer's highpoint was to be the Euro 96 tournament that followed. He'd made his debut in 1992, but during a turbulent period for the Three Lions had failed to match his prolific club form. Manager Terry Venables kept faith with Shearer for the tournament: he hadn't scored for England in two years, but his strike in the tournament's opening game was the first of five. Shearer left the tournament with the Golden Boot. He retired from international football in 2000, having scored 30 goals for England.

After the 1996 tournament, Shearer, still just 25, became the world's most expensive player. 15,000 fans showed up at St James' Park for a glimpse of their returning hero. It's said Shearer had just one demand of the club: to wear the famous number 9 shirt. 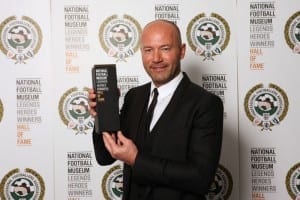 Over the following decade Shearer confirmed his status as a local legend. His 206 goals for the club saw him surpass the club's previous great number 9s: Hughie Gallacher, Jackie Milburn and Malcolm Macdonald were among the great Geordie goalscorers Shearer grew up in the shadow of. The boy from Gosforth was to eclipse them all.

Although Newcastle were to miss out on silverware (a 2nd place league finish in 1997 was followed by FA Cup Final defeat for the next two years), Shearer's reputation as arguably the greatest centre forward in the history of the English game was enhanced.

Not just a predatory 'finisher', Shearer was strong in the air, and could make and create goals for himself, or act as the classic 'hold-up' man and bring others into the game. Thunderous 30-yarders from free kicks or open play were always on the cards, and despite never being blessed with searing pace, his ability to find space to score was unrivalled. 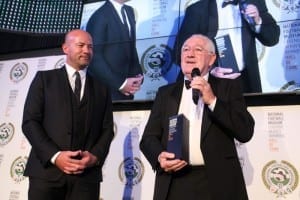 Alan Shearer's induction to the National Football Museum Hall Of Fame was announced in 2004, but Shearer was still busy wearing the number 9. He attended the ceremony, held at the museum in Manchester, in 2014. As well as receiving the award from his long-time friend and former Southampton team-mate Iain Dowie, Shearer presented an award in memory of Hughie Gallacher. Presenting the trophy to Gallacher's son, Shearer said his own dad had often claimed he'd "never be as good as Hughie". The hometown hero proved himself more than fit enough to wear the shirt.