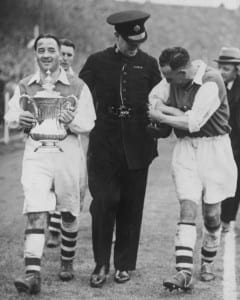 Alex James Arsenal Captain leaving the ground with the FA Cup after defeating Sheffield in the final at Wembley. Fellow player Joe Hulme attempts to untangle himself from a police officer who is guarding the cup. Picture via Mirrorpix.

Famous for wearing extra-long shorts that emphasized his short stature (5 and a half feet tall), and his gel-heavy parted hair, Alex James was the creative hub of the classic Arsenal team of the 1930s.

James had an ability to feign, turn and leave defenders in his wake. He spent four years with Preston North End before moving on to Arsenal in 1929. Arsenal manager Herbert Chapman played a counter-attacking game and came to rely on the passing abilities of the Scotsman from his deep-lying inside-forward position. He only netted 26 goals for the North Londoners but assisted many more, providing the ammunition which meant the likes of Cliff Bastin could flourish.

'He simply left the opposition looking on his departing figure with amazement'. - George Allison, football manager 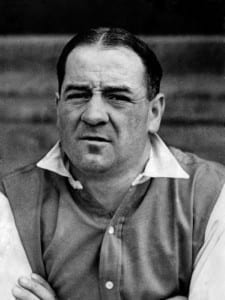 Arsenal reached the FA cup final in 1930-31 and James was instrumental in their victory: scoring the first goal and beginning the move which made the second.  He was part of the team which won Arsenal’s first ever First Division Championship  in 1930-1 and went on to win three more titles with the club. The 1935-6 season saw a poor League finish for Arsenal, finishing 6th, but the team won the FA Cup, captained by ‘wee Alex’. Internationally James only made 8 appearances.  He did, however, score twice as a member of Scotland's 'Wembley Wizards' who humiliated England 5-1 in 1928.

‘Wee Alex’ retired from football in 1937 and went on to serve in the Second World War. After the war he worked as a journalist and ran a football pools competition, until taking up a youth coaching role with Arsenal in 1949.