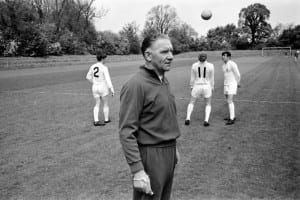 Yorkshireman Bill Nicholson developed one of the most celebrated teams in English football history, leading Tottenham Hotspur to a historic Double in 1960-61.

A life-long servant of Spurs, he honed his man-management skills during the Second World War as a sergeant physical education instructor. He joined the coaching staff at White Hart Lane after his retirement as a player, taking over as manager in 1958. Spurs beat Everton 10-4 in his debut match in charge, as a sign of great things to come.

Nicholson’s teams favoured a short-passing style, building attacks through midfield. With stylish play and a run of 11 successive wins at the start of the season, Spurs secured their Double, the first of the 20th century, in 1961, beating Sheffield Wednesday into second place in the League and defeating Leicester City 2-0 at Wembley.

The following season Spurs won the FA Cup again, and then in 1963 became the first English side to lift a European trophy, the European Cup Winners Cup. Spurs continued as a major force in English football throughout Nicholson’s remaining time as manager, adding a further FA Cup, two League Cups and a UEFA Cup to his trophy haul.

Awarded an OBE in 1975, the campaign by Spurs fans for him to be knighted was not successful before his death in 2004. The previous year he was inducted into the National Football Museum Hall of Fame. Unable to attend due to ill-health, his induction was most appropriately accompanied by that of his great team captain, Danny Blanchflower.

Blanchflower ascribed this famous quote to his manager that summed up his philosophy:

“It is better to fail aiming high than to succeed aiming low. At Spurs we set our sights very high, so that even failure will have in it an echo of glory.”