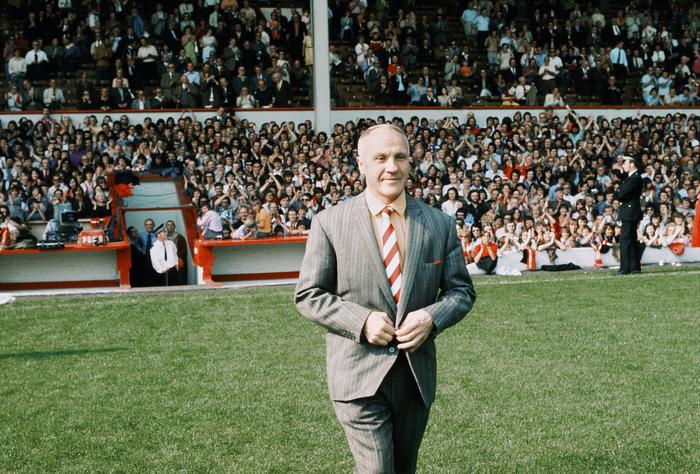 Liverpool manager Bill Shankly receives the Bells Whisky Trophy for Manager of the Year during a presentation ceremony at Anfield before his side's league division one match against Chelsea. Image courtesy of Mirrorpix.
8th September 1973.

Bill Shankly is the formidable Scottish manager credited with transforming Liverpool FC into one of Europe's leading clubs.

During a playing career that began at Carlisle United, but saw him established as full Scotland international while at Preston North End, Shankly was known as a 'firm but fair', hard-working Right Half. A commitment to working hard in training, focussing on ball-retention, fitness and set-pieces showed itself during his early management career at Carlisle, Grimsby Town, Workington and Huddersfield Town.

Shankly was approached about the Liverpool job while still in charge at Huddersfield in 1959. At the time both clubs were in Division Two. Liverpool had been languishing there for five seasons, and when Shankly took over mid-season, had been knocked out of the FA Cup by non-league Worcester City.

The team was, in Shankly’s opinion, lacking in talent, and the stadium and training facilities in need of much improvement. However his relationship with the club’s backroom staff, including Bob Paisley, Joe Fagan and Rueben Bennett became key to the years of success that lay ahead.

While Shankly’s revolution began on the training pitch, with competitive 5 a side games, and the introduction of a ‘sweat box’ (with each player given intense 2 minute sessions of pass-and-return training inside 4 close-packed walls, to improve fitness and ball control), he was equally as adept in the transfer market.

There were many reports of tension between Shankly and the Liverpool board as he set about instilling his philosophy on the club, but players like Ron Yeats and Ian St John were brought in, while the quality of young players like Gerry Byrne and Roger Hunt was beginning to pay dividends for the first team.

Shankly took Liverpool back to Division One for the 1962-63 season. By 1964 they were champions again. The following season saw them lift the FA Cup. Shankly had overseen a transformative period that was returning the club to greatness. Roger Hunt described them as “the fittest team in the country”, and the training ground work was continuing to pay off with more young players graduating to become full internationals.

During his time as manager, Liverpool would win two further Division One Championships, and after a number of seasons learning against top continental opposition in European competition, the UEFA Cup in 1973, becoming the first English club to win the domestic league and a European trophy in the same season. The following season Shankly’s side lifted the FA Cup for the second time. He surprised the footballing world by announcing his retirement shortly after.

"The people who matter the most are the ones who come through the turnstiles." - Bill Shankly

However, the legacy of a winning side, an intimidating stadium and a well-run club had been created. Shankly’s long-term assistant Bob Paisley succeeded him as manager and it was Paisley who went on to win even more silverware, including three European Cups and six league titles. However in the minds and memories of many Liverpool fans, all the success can be traced back to hard work of one man who loved the club, and whose fans loved him back: William Shankly, OBE.