As part of our new partnership with the Football Writers' Association, nationally recognised journalists and sports writers will be putting pen to paper in honour of selected Hall of Fame inductees. Here, former FWA chairman and West Ham United supporter Paul McCarthy (@PaulMcCarthy66) pays tribute to Billy Bonds, one of the finest players to take to the field at Upton Park. 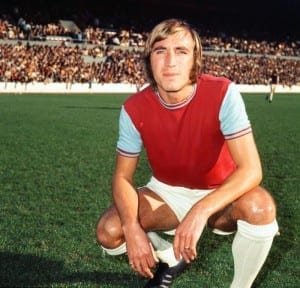 The majestic Bobby Moore, I’ll give you. Perhaps the elegance and vision of Sir Trevor Brooking have a rightful claim.

But if we’re talking about the finest player to ever pull on the claret and blue of West Ham, then a straw poll of the Hammers faithful would come up with one name and one name alone. That of William Arthur Bonds.

Bill in the dressing room and to his family. Billy to those who thought they knew this most unassuming of men. Bonzo to those of us who adored him from the Chicken Run and every other grimy corner of our beloved Upton Park.

Sadly these days, debates over the greatest West Ham player are skewed by social media and those who cannot believe football actually existed before 1992 and the advent of the Premier League.

They’ll throw names like Paolo Di Canio or Dimitri Payet at you, attaching assorted You Tube clips to back up their arguments, these chat room chancers.

You know what Bonzo would have done if a team-mate had refused to fly north citing a mystery injury, as happened on more than one occasion with Di Canio. Or if the star player had gone on strike claiming he was ‘homesick’ - he would have snapped them in half.

Because pulling on a West Ham shirt and doing a fair day’s work for a fair day’s pay was the mantra that saw Bonds last 21 seasons with the club, producing displays of such unbridled commitment that it was no sympathy vote when he was named Hammer of the Year long after he’d celebrated his 40th birthday. 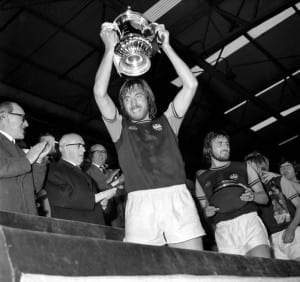 Billy Bonds lifts the 1975 FA Cup at Wembley after the Hammers' 2-0 victory over Fulham. (Image via Mirrorpix)

Listen, we can all romanticise the past and decry the excesses of later generations. But it’s not simply a nostalgia-tinged illusion to say the kind of personal integrity embodied by Bonzo is what is often missing from the game these days.

He literally wanted nothing more than to train as hard as he could and to play the way he trained on a Saturday afternoon. His reward was knowing that, as he ploughed his way south through the dreaded Blackwall Tunnel, he’d given all he could to West Ham that day.

During those 793 first team games - which included a run of 124 consecutive league matches - no West Ham fan saw Bonzo take a backward step. As a defender, he tackled like a bear trap. When he moved into midfield, he might have been been the enforcer to Brooking’s creator, but he could pass a ball with the best of them.

Great days out at Wembley saw him lift the FA Cup twice after inheriting the captain’s mantle from Moore. Yet it was always more than just glory and silverware that seemed to count for Billy.

He may have been born and continued to live south of the river but he was an adopted son of East London, an embodiment of the graft and values West Ham fans - perhaps overly-romantically - see in themselves. That’s why we loved him.

As my dad always said about him, a fine player but an even better man. I’m not sure there’s a more fitting tribute.