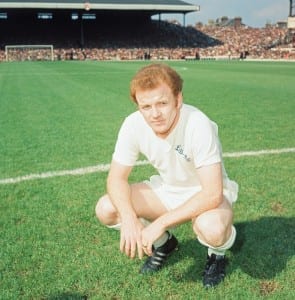 Billy Bremner Leeds United at the start of the 1971 -72 season. Pic courtesy of Mirrorpix.

Billy Bremner was the fiery midfield dynamo whose tireless energy spurred on Leeds United during their most successful years, under the management of Don Revie. His priceless precision passing, stamina and skill led him to become a Leeds United legend and one of the games' greatest midfielders. Bremner is honoured by a commemorative statue outside the South East corner of Leeds United’s Elland Road.

At just 5' 5" tall, Bremner was rejected by Arsenal and Chelsea for being too short before signing for Leeds at the age of 17. The two London clubs were soon to regret the decision as the diminutive Scot helped Leeds to promotion to the top-flight in 1964. Bremner became captain in 1966 and remained so until he left the club.

After several disappointments through the mid-60s, Leeds finally won a European competition (the Fairs' Cup) in 1968, which was also the year Bremner guided them to League Cup success. In 1969 Leeds won the League. He won the 1970 Footballer of the Year award as United narrowly missed a unique treble of League, F.A. Cup and European Cup.

With Johnny Giles alongside Bremner, Leeds had a magnificent midfield. The club had, however, gained a negative image: the press labelled them "Dirty Leeds", with Bremner viewed as being at the forefront of a physical, confrontational style.

"Little Billy Bremner is the captain of the crew
For the sake of Leeds United he would break himself in two
His hair is red and fuzzy and his body's black and blue
But Leeds go marching on." - Glory Glory Leeds United song

Bremner tasted FA Cup glory in 1972 and added another Fairs Cup and League Championship before the midfield dynamo’s glittering Elland Road career came to an end in 1976 with a move to Hull. He had been the most successful skipper in Leeds' history.

"No manager could wish for a greater leader or a greater player. If I was in the trenches at the front line, the man I would want on my right side is Billy Bremner” Don Revie 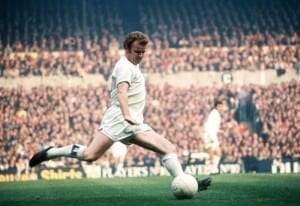 As an international, Bremner was at the forefront of Scottish football's rise in the 1970s. The World Cup in Germany 1974 saw Britain represented by Scotland. The team were eliminated without losing a match, and put in some fine performances including a draw against Brazil. Pele was full of praise for Bremner. In 1975 however he was given a lifetime ban from international football along with four other players, Willie Young, Joe Harper, Pat McCluskey and Arthur Graham after an incident involving a nightclub in Copenhagen. He won 54 caps in total, scoring three goals.

Although his passionate nature was a driving force it also got him into trouble on several occasions; most memorably during the 1974 Charity Shield at Wembley, when he and Liverpool's Kevin Keegan were centre-stage in a foul-laden match, during which punches were exchanged and the pair were sent off. Bremner nonetheless was not simply tough but a skilful player with an ability to score in crucial games.

In the official ‘Leeds United 100 Greatest Leeds Players’ Billy Bremner is listed at number one. 772 appearances, 115 goals, 11 years as captain: it's unlikely anyone will ever knock Billy off top spot.