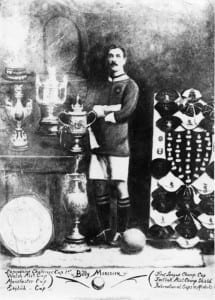 Manchester City and Manchester United's Billy Meredith pictured circa 1908 with an array of his cups, caps and medals. (Picture via Mirrorpix)

Veteran winger Billy Meredith played for both major Manchester Clubs in a long career featuring moments of brilliance and controversy. The determined and outspoken Welshman was to have a lasting impact on the game in his advocacy for 'player power', contributing to the creation of what is now the Professional Footballers' Association.

Initially he played for City, joining in 1894, helping them to two Second Division championships (1899 and 1903) and one FA Cup (1904). In the 1898-99 season Meredith scored 29 goals (including four hat-tricks). The ruthless combination of Meredith and Billy Gillespie helped City climb to promotion. In 1903-4 City finished second in the First Division, and beat Bolton Wanderers in the FA cup final, the only goal being scored by Meredith.

The end of Meredith’s time with the club however was marred in controversy. Accused of attempted bribery by the Aston Villa captain Alex Leake, Meredith was fined and suspended by the Football Association.  The charge resulted in further investigations into City’s finances. City was found guilty of paying extra for their players; in total seventeen players were suspended.

In 1906, alongside three others embroiled in the scandal, Meredith was signed by Manchester United after being sold at auction.  The first decade of the 20th century proved fruitful for Meredith. He won two League Championship medals in 1908 and 1911, and the FA Cup in 1909. In 1907 Meredith was also instrumental in Wales’ winning the Home nations Cup.

Meredith’s contribution to the game went far beyond his playing skills. The winger had been affected by the deaths of players throughout his career.  Initially involved with the Association Footballers’ Union, Meredith went on to help form the Players’ Union in 1907. The union sought better wages for players. The FA banned players from joining the union. Only Manchester United stood firm in their decision to continue the union. The players were consequently suspended by the FA and Meredith became part of the aptly named ‘Outcasts FC’. Eventually the Players’ Union was recognised by the Football Association.

On the pitch, Meredith continued to deliver the goods. The winger was known for his skill and trickery. His runs and precise crosses mark him as one of the greats of the game. He took the honour of becoming Manchester United's oldest player when turning out against Derby County aged 46.

In a final twist to his playing story, Meredith returned to Manchester City in 1921 on a free transfer. Turning out at City's Hyde Road ground as well as the then new Maine Road in his remaining career, he became City's oldest appearance-maker in a 1924 FA Cup semi-final against Newcastle United, aged 49.

The original ‘Welsh Wizard’ died aged 83 in 1958, shortly after the Munich Air Disaster. After he spent many years in an unmarked grave, the PFA, the Welsh FA, Manchester City and Manchester United all agreed to cover the cost for a new headstone.