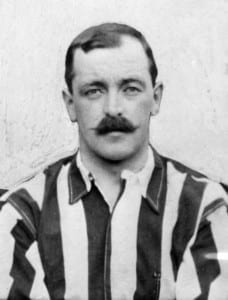 In the opinion of one sportswriter Robert Crompton, ‘was THE back of his day.’ Appearing 576 times for Blackburn Rovers between 1897 and 1920, he became synonymous with his home-town club. He captained them to two First Division titles but failed to win the FA Cup winner’s medal he so badly wanted, losing two FA Cup semi-finals.

Admired as much for his character as for his playing abilities, Crompton was the first professional player to captain England. The first England player to receive 25 caps, his record total of 41 caps was not beaten until 1952.

Away from the field, Crompton was an industrious if retiring figure. One of the first players to own a motor car, he later ran a motor business amongst several business interests. Approached by a journalist to write his autobiography, his response was, ‘I have had my day as a player – let it end at that.’